Ques.111. Why trickle charging of the batteries is done?

Sulfation:- “A lead-acid battery can be charged and recharged only a finite number of times because the use of the battery causes crystalline lead sulfate to be deposited and accumulate on the surface of the positive and negative electrodes of the battery.

It occurs when batteries are subjected to prolonged undercharge conditions. During normal use, soft sulfate crystals form and dissipate as part of the normal charge and discharge cycle. During periods of prolonged undercharge, the sulfate converts to hard crystals and deposit on the negative plates i.e Lead. With time the crystals grow in size and become hard, covering the lead plates completely. This coverage deteriorates the overall efficiency and power storage capability of the battery. Sulfation also increases the internal resistance of a battery. This means a higher charging voltage is needed to regenerate active plate material when charging.

When a magnetic material is subjected to one cycle of magnetization, B always lags behind H so that the resultant B-H curve forms a closed loop, called hysteresis loop. For the second cycle of magnetization, a similar loop is formed if a magnetic material is located within a coil through which alternating current (50 Hz frequency) flows, 50 loops will be formed every second. This hysteresis effect is present in all those electrical machines where the iron parts are subjected to cycles of magnetization e.g. armature of a d.c. machine rotating in a stationary magnetic field, transformer core subjected to alternating flux etc.

Hysteresis loss is present in all those electrical machines whose iron parts are subjected to cycles of magnetization. The obvious effect of hysteresis loss is the rise of temperature of the machine. It can be shown that hysteresis energy loss per cycle is directly proportional to the area of the hysteresis loop.

where Kh is the Hysteresis coefficient depends upon the material. The smaller the value of Kh of a magnetic material, the lesser is the hysteresis loss. The armatures of electrical machines and transformer cores are made of magnetic materials having low hysteresis coefficient in order to reduce the hysteresis loss. The best transformer steels have Kh values around 130, for cast steel they are around 2500 and for cast iron about 3750.

Ques.113. What will be the voltage across resistance R1?

Ques.114. What will be the voltage across resistance R3?

Ques.115. What are the elements of the Nucleus of an atom?

Nucleus: The dense structure at the center of an atom. Protons and neutrons are found inside the nucleus of an atom.

Ques.116. What happens internally on an atomic level when an external electric field is applied to an intrinsic semiconductor?

Semiconductors can be classified into two types—intrinsic and extrinsic. Intrinsic semiconductors are pure elements like Si and Ge. At 0 K, the valence band is completely filled and the conduction band is empty.

At room temperature, some covalent bonds of an intrinsic semiconductor are broken and liberate some electrons from the orbit and these electrons move freely within the material like gas molecules and are called free electrons. When electrons are liberated from the covalent bonds, then an empty space Is left behind. This empty space (absence of electrons in the covalent bond) is called the hole. Hence an electron-hole pair is generated. These electrons and holes are responsible for conduction of current. In intrinsic semiconductors, the number of electron and holes are equal and very small so its conductivity is very low to be used in different electronic applications.

Under the influence of the external electric field, an equilibrium condition is disturbed and electrons move in a direction opposite to that of holes. Holes can be thought of as positively charged particles. The movement of electrons in the conduction band and that of holes in the valance band constitutes current in a semiconductor. Electrons and holes together are known as Charge carders. Thus in a semiconductor, current is constituted by two types of carriers: (a) electrons and (b) holes. In metals, conduction is due to electrons only.

It is also possible that some of the free electrons in conduction band may combine with holes in the valence band. This process is known as Recombination. In the process of recombination, an electron loses energy.

Ques.117. What will be the value of susceptibility when the curie constant value is 0.2 and the difference in critical temperature and paramagnetic Curie temperature is 0.01?

The magnetic susceptibility is given as

The difference in critical temperature and paramagnetic Curie temperature is (T − θ) = 0.01

Ques.118. What will be the capacitance of a capacitor if the charge stored on its plates is large?

Capacitance is the ratio of the change in an electric charge in a system to the corresponding change in its electric potential.

Mathematically, the self-capacitance of a conductor is defined by

q is the charge held by the conductor,

V is the Voltage 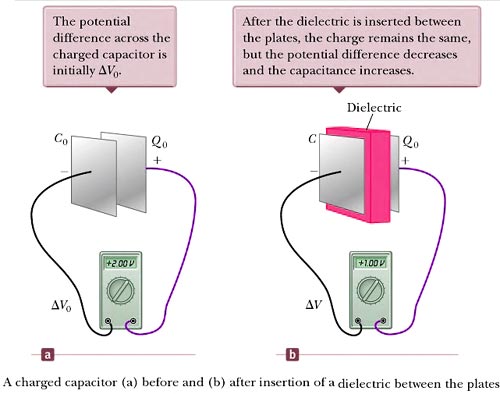 Ques.119. What would be the computational value of feedback voltage in a negative feedback amplifier with A = 100, β = 0.03 and input signal voltage = 30 mV?

The gain of the negative feedback amplifier is given as

A is the voltage gain of the amplifier without feedback = 100
Vout is the output voltage =?
Vin is the input voltage =30 mV

Ques.120. What is the expression of the capacity of a battery?

The capacity of a battery is measured in amp hours (Ah). This indicates the amount of energy that can be drawn from the battery before it is completely discharged A battery of 100 Ah should ideally give a current of 2 amps for 50 hours (i.e. 2 amps times 50 hours equals 100 amperes).