Ques.101. When metal is kept at a room temperature, its electrons from the surface cannot escape because:-

The surface barrier is analogous to the gravitational pull of the earth. If a body is thrown upwards, it comes back to the earth because of the gravitational force. For a rocket or spaceship to come out of the earth’s attracting field, it has to be launched with a velocity greater than a particular value. This value of minimum velocity is called escape velocity. Similarly, an electron can come out of the metallic surface permanently, only if its velocity (or kinetic energy) is more than a particular value. Modern physics tells us that even at the absolute zero of temperature, the velocity (or kinetic energy) of all the electrons does not reduce to zero; there are many electrons that possess appreciable energy. The highest energy that an electron in a metal has, at the absolute zero of temperature is called the Fermi level of energy. It is designated as En. For emission to take place, we have to supply additional energy from outside. This additional energy needed for emission is called the work function of the metal. However, if the temperature of the metal is high enough of an order of 150 to 2500 K, some electrons gain sufficient thermal energy to escape out from the metal surface. Thus electrons are emitted from the metal surface which is called thermionic emission. The emission of an electron from a hot metal surface is similar to the discharge of steam from heated water.

Ques.102. Choose the characteristics which are not related to an ideal opamp.

The operational amplifier (popularly known as an op-amp) is an active device used to design circuits that perform useful operations, such as generating sine waves or square waves; amplifying, combining, integrating, differentiating and removing noise; and transforming alternating current into direct current and vice-versa. It can also change the shape of a waveform, produce a change in the output when an input signal reaches a certain level, provide constant voltage or current, and perform various other important circuit operations. Op-amp circuits are very important as we develop a valuable perception about how electronic circuits work in general.

An op-amp is a very high-gain differential amplifier with high input impedance and low output impedance.

An ideal op-amp would show the following characteristics:

The common mode rejection ratio (CMRR) of a differential amplifier (or other device) is a metric used to quantify the ability of the device to reject common-mode signals, i.e., those that appear simultaneously and in-phase on both inputs.

ii) what do i mean by common mode voltage(gain)?

Common mode basically means that both the inputs are common to OpAmp
therefore, in our case V2=V1 so Vo becomes ZERO and thus

Nuclear fission means breaking up of nuclei of heavy atoms into small masses with a huge amount of energy. The release of energy is due to mass defect i.e., the mass of the final product comes to be Icss than the initial product. This mass defect is converted into heat energy according to Einstein’s relation E = mc2, where m = mass of the atom and c = velocity of light. Nuclear fission is accompanied by the chain reaction i.e. emission of neutrons continues the process randily. But in a nuclear reactor, the controlled reaction is allowed.

The Fig.shows the schematic arrangement of a nuclear power plant.

The entire arrangement can be divided into the following stages

This represents that part of a nuclear power plant where U235 fuel rods is subjected to a controlled fission chain reaction, during which tremendous energy is generated.

Moderators: The main function of the moderators is to reduce the energy of the neutron evolved during fission. By slowing down the high energy neutron, We possibility of escape of neutrons is reduced while the possibility of absorption of neutrons by fuel to cause further fission is increased. This also reduces the amount of fuel required for the chain reaction.

The steam generated from the water in the secondary circuit is taken to the steam turbine through the main valve, where it is expanded. Due to this, the turbine starts rotating and thus the heat energy is converted to a mechanical energy.

Ques.104.What does the amp2 sec rating of the SCR specify?

The current carrying ability of the SCR is determined by the temperature at its junction. Since the thyristor is made up of a semiconductor material, it’s thermal capacity is, therefore, quite small. Hence, even for short overcurrents, the junction temperature may exceed the rated value and the device may be damaged. In this section, current ratings of SCR are discussed for both repetitive and non- repetitive type of current waveforms.

The di/dt rating specifies the maximum allowable rate of change of current through the device. Due to rapid variations in anode current, the carriers do not spread across the junctions at the turn-on time. Hence they are concentrated in a small area of the device, creating local heating. This is called hot-spot created due to high current density in the restricted area of the junctions. Because of this, the junction temperature increases and the device may be damaged. The di/dt rating specifies maximum allowable variations in anode current so that the device will not be damaged. Normally it is specified in Amperes/microseconds and typical values are from 50 A/μs to 800 A/μs sec.

The SCR blocks the forward and reverse voltages. The voltage ratings mainly specify the maximum allowable voltages those the device can withstand without damaging the junctions.

Ques.105. What is the Synchronising power of a synchronous machine?

The variation of synchronous power with the change of load angle is called the synchronizing power. It exists only during the transient state, i.e. whenever there is a sudden disturbance in load (or steady-state operating conditions). Once the steady state is reached, the synchronizing power reduces to zero.

If an alternator transfers power to an infinite bus at a steady-state power angle δoand a sudden transient disturbance due to increase in load will occur the rotor of the alternator will accelerate and at a load angle δo + dδ, the alternator supplies new power P + dP. Therefore, the operating point shifts to a new line. The steady-state power input remains unchanged. Therefore, the additional load decreases the speed of the machine and hence the alternator comes back to the steady-state position. Similarly, due to sudden transient, if the rotor retards, the load angle will decrease. The operating point will shift to a new line and the load on the machine becomes P – dP. Once again the input to the machine remains unaltered, therefore, the rotor is accelerated due to the reduction in load. Hence, the machine comes back to synchronism. Therefore, we can conclude that the effectiveness of this correction action depends upon the change in power transfer for a given change in load angle 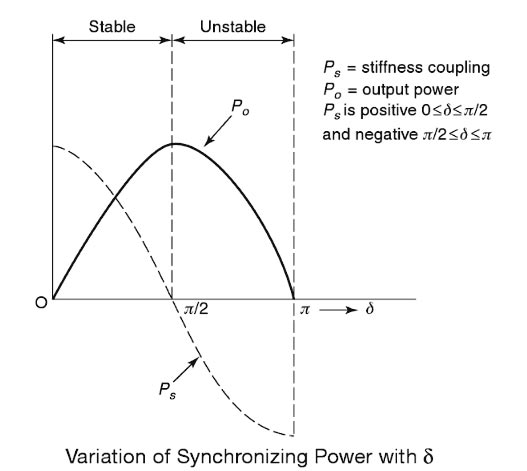 The synchronizing power of the synchronous machine is given as

Hence from the above expression, it is clear that synchronizing power is inversely proportional to the synchronous reactance.

Ques.106. What is the reserve capacity, if the maximum demand of generation of power is 50 MW, load factor of 60% and a plant capacity factor of 50%?

Load factor is the ratio of average load to the maximum demand during a given period.

Plant capacity factor is defined as the ratio of the average load to the rated capacity of the power plant ie. the aggregate rating of tile generators. It is preferable to use continuous rating while calculating the aggregate.

Reverse capacity is the difference between Plant capacity and Max.demand

For common emitter, the current gain β is defined as the ratio of collector current to base current at a constant VCE .

Here negative just gives information about its direction and nothing else. Because by convention positive current is always defined as flowing into the device. So if you have a PNP common base amplifier and you source current into the emitter input, it will flow out of the collector output. Since the current is flowing out, it is a negative current, hence the gain is negative.

Ques.108. What the damper bars develop, when the rotor speed, in a synchronous machine, becomes more than the synchronous speed during hunting?

To enable the synchronous machine to start independently as a motor, a damper winding is made on rotor pole face slots. Bars of copper, aluminum, bronze or similar alloys are inserted in slots made or pole shoes as shown in Fig. These bars are short-circuited by end-rings or each side of the poles. Thus these short-circuited bars form a squirrel-cage winding. On application of three-phase supply to the stator, a synchronous motor with damper winding will start at a three-phase induction motor and rotate at a speed near to synchronous speed. Now with the application of dc excitation to the field windings, the rotor will be pulled into synchronous speed since the rotor pole are now rotating at only slip-speed with respect to the staler rotating magnetic field. 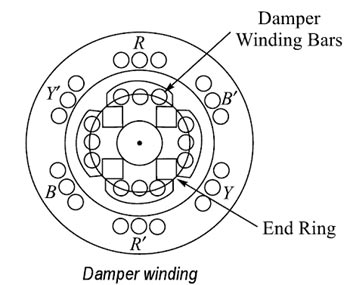 Ques.109. In the DC circuit, which of the following components is used to reduce the voltage?

An ideal resistor dissipates (converts into heat) electrical power. They are not capable of delivering power. Capacitors and inductors both are capable of absorbing and delivering (positive) power. When power is absorbed by an ideal capacitor, all of it is stored in the form of an electric field. Likewise, all of the power absorbed by an ideal inductor is stored in the form of a magnetic field. These devices can deliver this stored energy, but cannot produce energy. They never dissipate energy, stores energy during the one-half cycle and releases energy during another half cycle for an AC signal. (when you switch on them they will ‘store’ energy in them. But when you switch off the supply theoretically you can get back energy that was stored.)

Real capacitors and inductors, however, are not ideal and will dissipate some power due to imperfections within the device (leakage within a capacitor, for example). This is why in simulations, capacitors and inductors will sometimes have very complex models to attempt to simulate real-world behavior (such as a leakage within a capacitor, which can be modeled simply with a high-resistance resistor in parallel with the capacitor).

Ques.110. Which of the following battery is not rechargeable?

A silver-oxide battery non-rechargeable is a primary cell with a very high energy-to-weight ratio.they are known both as button cells, for example, for hearing aids, watches, or cameras, and for military applications, usually as reserve batteries. 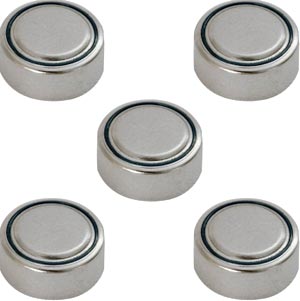