Ques.111. Which of the following groups are examples of insulators?

When an electric field is applied to a conductor, there occurs a large scale physical movement of free electrons because these are available in large numbers in Conductor. The resistivity of the conductor is 10−8 to 10−6.

On the other hand, if an electric field is applied to an insulator, there is hardly any movement of free electrons because these are just not available in an insulator. Plastics, wood, and rubber are examples of good insulators. Pure water is also an insulator. Tap water, however, contains salts that form ions which can move through the liquid, making it a good conductor.

Ques.112. Which of the following part or auxiliary is not used in the diesel power station? 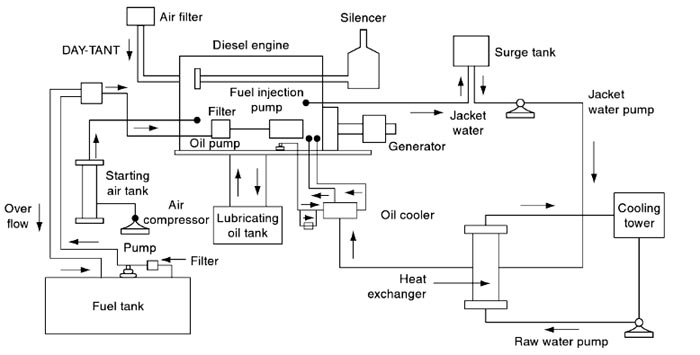 (i) Air intake and exhaust system: This system consists of pipes arrangement for admitting fresh atmospheric air into the diesel engine, and also to pump out the exhaust gases to the atmosphere. Filters are needed at the air inlet to remove dust particles etc. from the incoming air. At the outlet of the system, the silencer is provided to reduce the noise when the exhaust gases are coming out from the engine.

In order to reduce the specific fuel consumption and to increase the engine capacity, the intake system must have to maintain minimum pressure loss.

(ii) Fuel supply system: This system consists of the fuel tank to store fuel, and fuel pumps and fillers lo transfer and inject fuel into the diesel engine. Fuel oil is supplied by trucks, rail, cars, etc. at the plant site.

(iii) Cooling system: This system circulates a sufficient amount of water around the engine in order to maintain the desired temperature. The hot water re-cooled in the cooling ponds again recirculated into the system.

(iv) Lubricating system: This system is necessary to reduce ware on the rubbing parts and friction. It consists of the lubricating oil tank, pumps, filters, etc.

The diesel engine is nothing but internal combustion engine, in which fuel is ignited by injecting into system thereby compression. So that these engines are also called as compression ignition engines. This engine will convert heat energy into mechanical work. In the combustion chamber, fuel burns rapidly and gases attain the very high temperature and produce extremely hot compressed gases. These gases expand and push back the piston of the engine. This is nothing but the power stroke in which mechanical work is done. This work is helpful to rotate the crankshaft on which generator is mounted, which converts mechanical power into electric power.

(v) Starting system: Starting system is essential for the initial starting of the engine. It consists of the compressor, battery, and electric motor (or) self-starter.

Note:- Steam generator or boiler is usually found in the thermal power plant.

Ques.113. Which of the following diodes is also known as a hot carrier diode?

The Schottky diode (named after the German physicist Walter H. Schottky),  is a semiconductor diode formed by the junction of a semiconductor with a metal.  They are also known as hot carrier diodes. This name comes out as follow. Forward bias increases the energy of the electrons on the N side to a higher level than that of the electrons on the metal side of the junction. This increase in energy inspired the name hot carrier for the n-side electrons. As soon as these high-energy electrons cross the junction, they fall into the metal, which has a lower-energy conduction band.

A Schottky diode is formed by joining a doped semiconductor region (usually n-type) with a metal such as gold, silver or platinum. Rather than a PN junction, there is a metal-to-semiconductor junction. The forward voltage drop is typically around 0.3 V.

The Schottky diode operates only with majority carriers there are no minority Carriers and thus no reverse Leakage current as in other types of diodes. The metal region is heavily occupied with conduction band electrons, and the n-type semiconductor region is lightly doped. When forward-biased, the higher energy electrons in the n region are injected into the metal region where they give up their excess energy very rapidly.  Since there are no minority carriers, as in a conventional rectifier diode, there is a very rapid response to a change in bias. The Schottky is a fast-switching diode and most of its applications make use of this property. It can be used in high-frequency applications and in many digital circuits to decrease switching times.

Ques.114. Which of the following scales offers the widest range for measurement through an instrument?

1. Linear Scales:- A linear scale like a foot rule, is the simplest to read. Though termed as linear it may form a part of the arc, however, the graduations will be uniformly disturbed. The moving coil electrodynamic wattmeters generally have the linear scale. Moving iron instruments also have nearly linear scales.

If the current to be measured extends over a wide dynamic range, for example spanning several orders of magnitude, there is a risk that the signal conditioning circuit can saturate at its upper or lower limit and no measurement will be obtained. This problem can arise in the measurement of photocurrents in the atmosphere which span a large range of values during the daytime, and in atmospheric electricity measurements where currents generated in elevated points vary between HA in disturbed weather to pA in fair weather. An alternative approach for current measurement is therefore needed if, in preserving the capability to measure large currents, good resolution is still required at the low current end of the range.

A wide operating range can be achieved with a logarithmic current amplifier, which generates an output voltage proportional to the logarithm of the input current. This can be implemented with an opamp by using a device having an exponential voltage-current response in place of the feedback resistor of the trans-resistance configuration, such as a diode.

Similarly, we use logarithmic scales for things that come in an extremely wide variety of sizes. Earthquakes are just one example: a 9.0 earthquake releases a trillion times as much energy as a 1.0 earthquake.

Ques.115. Which of the following is used to neutralize the Ferranti effect in the medium and long transmission lines?

A long transmission line can be considered to be composed of a high amount of capacitance and inductor distributed across the entire length of the line. Ferranti Effect occurs when current drawn by the distributed capacitance of the line is greater than the current associated with the load at the receiving end of the line which occurs during light or no load.

Shunt Reactor compensation at the receiving end help to reduce the effect of capacitance thus reducing the Ferranti effect.

Shunt Reactor absorbs the excess reactive power during no load or light load condition and thus helps in stabilizing the voltage of Transmission Line.

Ques.116. Which of the following semiconductor materials is used to make green LEDs? 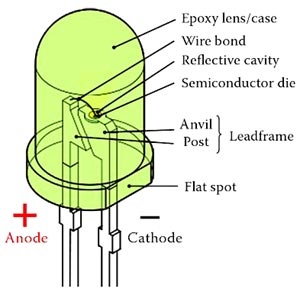 The semiconductor material typically takes the form of a very small chip or die, which is mounted onto a lead frame and encapsulated in a clear or diffused epoxy. The shape of the epoxy and the amount of diffusing material in the epoxy control the light output angle of emission.

The material for this wavelength range of products is Indium Gallium Nitrate InGaN.  Most large suppliers concentrate on creating blue (450-475 nm) LEDs for making white light with phosphors, and green LEDs that fall into the 520 to 530 nm range for green traffic signal lighting.

Aluminum indium gallium phosphide (AllnGaP) is the semiconductor material used for this wavelength range. It is predominately used for amber traffic signals (590 nm) and red (625 nm) lighting. The lime green (or yellowish-green 565 nm) and orange (605 nm) are also available from this technology, but they are somewhat limited. The technology is rapidly advancing, for the red wavelength in particular, because of the growing commercial interest in making red-green-blue white LED lights.

Other semiconductor used for making Greenlight is

Ques.117. Which of the following are the functions of a transistor?

The transistor is a semiconductor device made by joining together three layers of P and N-type material.

When you design a transistor circuit, you choose components that will put the transistor into the right operating mode (cutoff, active, or saturation), depending on what you want the transistor to do. Here’s how:

Transistor as a variable Resistor:- The operation of a transistor could be explained by making an analogy to faucets. 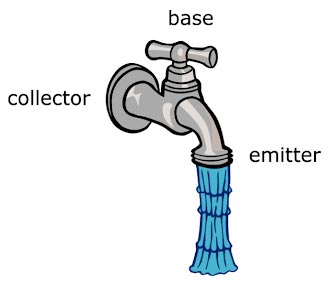 Transistor amplifier: if you want to use the transistor as an amplifier (active model, you select supply voltages and resistors to connect to the transistor so that you forward-bias the base-emitter junction and allow just enough base current to flow—but not so much that the transistor becomes saturated. This selection process is known as biasing the transistor.

Ques.118. Which of the following is correct about the gain of a cascade amplifier?

Cascading of Amplifiers is a process of connecting a set of Amplifiers in series with the output voltage of one stage applied as the input voltage to the next following stage input port through inter-stage coupling elements or direct coupling. The figure shows a cascaded Amplifier with three stages of Amplifiers having gains A1, A2 and A3.

Now the gain A of this three-stage cascaded Amplifier is the ratio of Vout to Vin.

The total gain A of the cascaded Amplifier is the product of the gains of the individual stages, which is A1.A2.A3

A nonlinear device is a device which does not have a linear input/output relation. In a diode, for example, the current is a non-linear function of the voltage.

For a device to be linear, when one of its parameter changes, its other parameter should also change accordingly with the same magnitude. Like, if we have a 2-ohm resistor, and we apply 2 amp current across its terminals, the output voltage would be 4 V. If we double the current i.e. supply 4 amp then the output voltage would be doubled as well. So, the resistor is a linear device.

However, changing the voltage or current across a diode does not result in a corresponding change in current or voltage, respectively. Typical I-V diode characteristics are shown in Figure. In the case of a common silicon diode, the forward-direction current increases exponentially at first, and then is limited by an ohmic resistance of the structure. A very small reverse current at first increases slightly with applied voltage and then starts to multiply near the breakdown voltage. The current at the breakdown is limited by ohmic resistances of the structure. 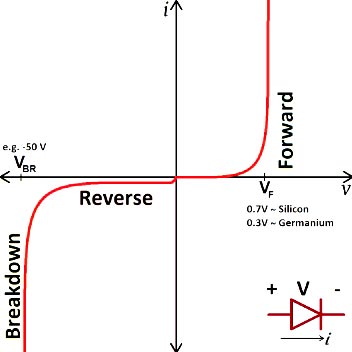 Ques.120. Which of the following statements is correct about capacitors? 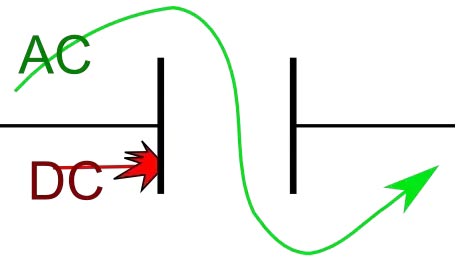 Just like resistors, capacitors also offer some form of resistance against the flow of current through the circuit, but with capacitors in AC circuits this AC resistance is known as Reactance.

When the frequency of input signal is very low, or zero, it will charge in few time constants (i am assuming time constant is very low) and then stay that way, and discharge only when the signal voltage goes lower than capacitor voltage. If its zero, only charging will take place when supply is on, which is why it becomes open circuit after a few time constants.

On other hands, in case of very high-frequency signals, the capacitor will charge and discharge so rapidly that it appears as if the capacitor is conducting, thereby acting like a short (though not an ideal short circuit).