Buchholz relay is used for the protection of

Buchholz relay is used for the protection of

It uses the principle that due to the faults, oil in the tank decomposes, generating the gases. The 70% component of such gases is hydrogen which is light and hence rises upwards towards the conservator through the pipe. The Buchholz relay is connected to the pipe, as shown in Fig. Due to the gas collected in the upper portion of the Buchholz relay, the relay operates and gives an alarm. 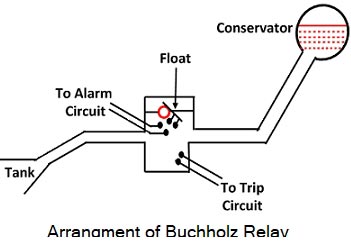 There are many types of internal faults such as insulation fault, core heating, bad switch contacts, faulty joints, etc. which can occur. When the fault occurs the decomposition of oil in the main tank starts due to which the gases are generated. As mentioned earlier, the major component of such gases is hydrogen. The hydrogen tries to rise up towards the conservator but in its path, it gets accumulated in the upper part of the Buchholz relay.

When gas gets accumulated in the upper part of the housing, the oil level inside the housing falls. Due to which the hollow float tilts and closes the contacts of the mercury switch attached to it. This completes the alarm circuit to sound an alarm. Due to this operator knows that there is some incipient fault in the transformer. The transformer is disconnected and the gas sample is tested. The alarm circuit does not immediately disconnect the transformer but gives the only indication to the operator. This is because sometimes bubbles in the oil circulating system may operate the alarm circuit though there is no fault.

However, if a serious fault such as an internal short circuit between phases, earth fault inside the tank etc. occurs then a considerable amount of gas gets generated. Thus due to the fast reduce the level of oil, the pressure in the tank increases.  This energizes the trip circuit which opens the circuit breaker. Thus transformer is totally disconnected from the supply.

For the economic considerations, Buchholz relays are not provided for the transformers having a rating below 500 kVA.