1. For a voltage source to be neglected, the terminals across the source are ______

If we put R=0, then v(t) =0 whatever be the current through the element. In this case, the 2-terminal resistor is said to be a short circuit. In the v-i plane, a short-circuit characteristic is the i axis as shown in Fig. is zero, that is, R=0 and equivalently G = ∞, 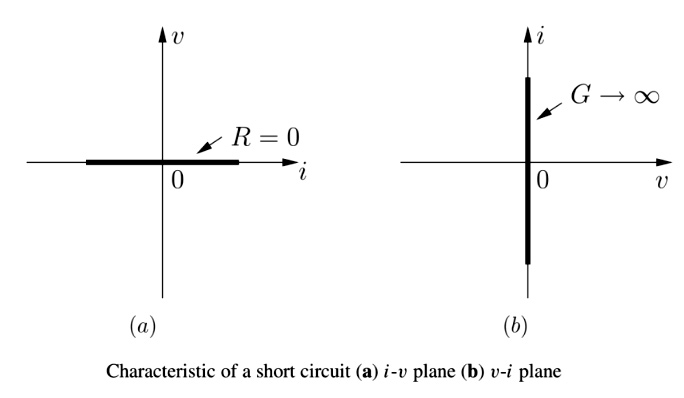 A two-terminal resistor is called a short circuit iff its voltage v is identically zero irrespective of the currenti;i.e., f(v,i) = v =0.

When you connect two points in a circuit that have different voltages, you get a short circuit. When this happens, you bypass the other parts of a circuit (called the load) and establish a path of low resistance, causing most of the current to flow around or away from some other parts in the circuit. Accidental short circuits, especially between the high and low voltages of a power supply, can cause strong current to flow, possibly damaging or overheating the power supply and the circuit if the circuit isn’t protected by a fuse.

2. To neglect a current source, the terminals across the source are

(Open Circuit):- A two-terminal resistor is called an open circuit if its current i is identically zero irrespective of the voltage v; i.e., f(v,i) =i =0. The characteristic of an open circuit is the v axis in the v—i plane, with zero slopes (G = 0). In the i-v plane, it has an infinite slope, R —  ∞, as shown in fig.

The internal resistance is the ratio of change of voltage across the device to the change in current through it, we see that the internal resistance must be infinitely large. The voltage across the source changes but the current, in an ideal source, does not. Hence the change in the current is zero, and any number, when divided by zero, gives an infinitely large quotient.

Answer.2. Maybe a current source or a voltage source

The category of a source whose output (current or voltage) is a function of some other voltage or current in a circuit is known as a dependent source. A different symbol, in the shape of a diamond, is used to represent the dependent source and distinguish it from the independent source.

The important thing to remember about these sources is that they can either deliver or absorb electric power, generally maintaining either voltage or current. This behavior is of particular interest for circuit analysis and led to the creation of the ideal voltage source and the ideal current source as basic circuit elements.

Answer.2. Resistance in series with an ideal voltage source 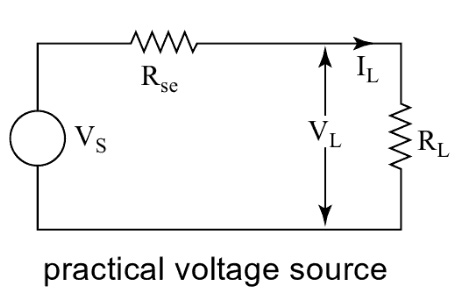 Answer.1. Resistance in parallel with an ideal current source 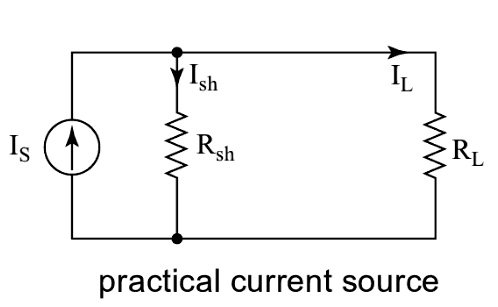 7. Which of the following statement is incorrect about active and Passive elements?

Answer.4. The voltage source is a passive element

An active component supplies energy to an electric circuit and hence has the ability to electrically control the flow of charge.

A passive component can only receive energy, which it can either dissipate or absorb.

The resistor, an inductor is a passive element of an electrical circuit. While current source, voltage source, and battery are all active elements.

8. Which of the following is true about an ideal voltage source?

9. The terminals across the source are _____ if a current source is to be neglected. 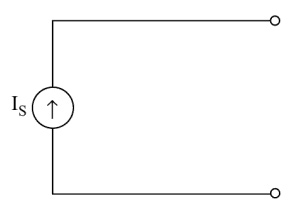 T=0- represents the instant before the event. In this case, the switch has been closed for some considerable time

T=0 is the Initial condition. The switch is closed i.e, switched on.

T=0+ is the instant after the event that means the switch has just opened.

Energy cannot change instantaneously for elements that store energy. Thus, there are no discontinuities allowed in current through an inductor or voltage across a capacitor at any time—specifically, the value of the variable remains the same at t=0− and t = 0+.

At t=0− a capacitor acts as an open circuit. Thus at a steady state at t=0− we replaced capacitors by open circuits in the circuit.

At t = 0+  the capacitor voltage cannot change in going from t=0− to t = 0+, we replace the capacitors with voltage sources whose values are the voltages at t=0−.

A capacitor maintains a constant voltage, and the process is often called smoothing the current. It accomplishes this by using its storage capacity—its capacitance—to either donate or accept electrons when there is a drop or a spike in voltage.

If there is a voltage drop in a circuit, the capacitor will push electrons toward the direction of the source voltage, acting as a voltage source. This may seem counterintuitive because we are used to thinking of electrons flowing in a single direction, from the positive to the negative terminals of a power supply. But electrons also flow “backward” in a circuit if the charge in the capacitor is positive compared to the voltage entering the capacitor. Electrons are still flowing positive to negative, but until the charges match, the capacitor acts as source voltage until it has exhausted its capacitance.

At t = 0+ the inductor current cannot change in going from t=0− to t = 0+, we replace the inductors with current sources whose values are the currents at t=0−.

Unilateral System:- If the magnitude of current flowing through a circuit element is affected when the polarity of the applied voltage is changed, the element is termed unilateral element. Such as diode, Voltage source etc.

Active Element:- An element that is a source of an electrical signal or which is capable of increasing the level of signal energy is termed an active element. Such as voltage source, current source, etc.

Hence Constant voltage source is a Unilateral and Active element

13. When the output voltage of a voltage source decreases as the load current increases are called as

14.  In a network consisting of linear resistors and ideal voltage source, if the value of resistors are doubled, then the voltage across each resistor _______

An ideal voltage source has the following characteristics:

(i) It is a voltage generator whose output voltage remains absolutely constant whatever be the value of the output current.

(ii) An ideal voltage source is one in which the load voltage does not change when the load resistance varies.

(iii) It has zero internal resistance so that the voltage drop in the source is zero.

(iv) The power drawn by the source is zero.

A source transformation allows us to replace a voltage source and series resistor with a current source and parallel resistor. Doing so does not change the element current or voltage of any other element of the circuit.

16. Which of the following transformation is shown below in the given figure?

A voltage source is equivalent to a current source and vice-versa, if they produce equal values of IL, and VL, when connected to the load RL, They should also provide the same open-circuit voltage and short-circuit current.

If the current source is converted into a voltage source, as in Fig.. we consider the open-circuit voltage equivalence, then

17. If the voltage source is converted into the current source, we consider the _________ equivalence, then:

Any practical voltage source having an ideal voltage Vs, and internal series resistance Rse, can be replaced by a current source Is = Vs/Rse in parallel with an internal resistance Rsh, as shown in Fig.

If the voltage source is converted into the current source, as  we consider the short-circuit current equivalence

18. A voltage source having an open-circuit voltage of 100 V and internal resistance of 50 ohms is equivalent to a current source of: 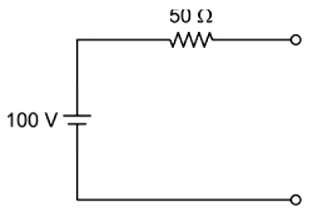 By source transformation, we can represent this circuit as a current source with resistance in parallel. 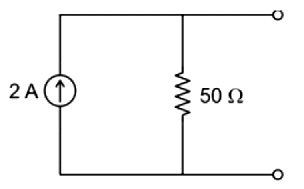 19. A current source of 100 A with an internal resistance of 10 Ω into an equivalent voltage source of

for an equivalent voltage source

and the value of resistance will remain the same i.e 10 ohms

By source transformation, we can represent this circuit as a voltage source with resistance in series 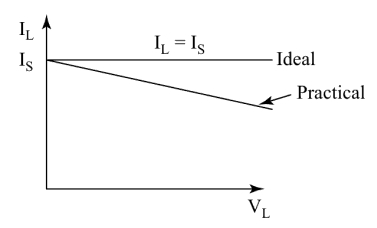