A complete electrical circuit exists when electrons flow along a path between two points. In a complete circuit, resistance must be low enough to allow the available voltage to push electrons between the two points. Most automotive circuits contain four basic parts.

1. Power sources, such as a battery or alternator, that provide the energy needed to cause electron flow.

2. Conductors, such as copper wires, that provide a path for current flow.

3. Loads are devices that use electricity to perform work, such as light bulbs, electric motors, or resistors.

4. Controllers, such as switches or relays, that control or direct the flow of electrons.

There are also three basic types of circuits used in automotive electrical systems: series circuits, parallel circuits, and series-parallel circuits. Each circuit type has its own characteristics regarding amperage, voltage, and resistance.

If a number of different circuit components are connected ‘end-to-end’, so that there is only one continuous path for the current to flow along, then these components are said to be connected in series. Therefore in a series circuit, all the resistors are placed one after the other so that the electrical current must flow through each resistor as it flows around the circuit.

Current in a series circuit

Voltage drops in a series circuit

The voltages in the series circuit depend on the resistance of the components in the circuit. As that amount of current leaves the battery. it flows through the conductor to the first resistor. At the resistor, some electrical energy or voltage is consumed as the current flows through it. The decreased amount of voltage is then applied to the next resistor as the current flows to it. By the time the current is flowing in the conductor leading back to the battery, all voltage has been dropped. All of the source voltage available to the circuit is dropped by the resistors in the circuit. 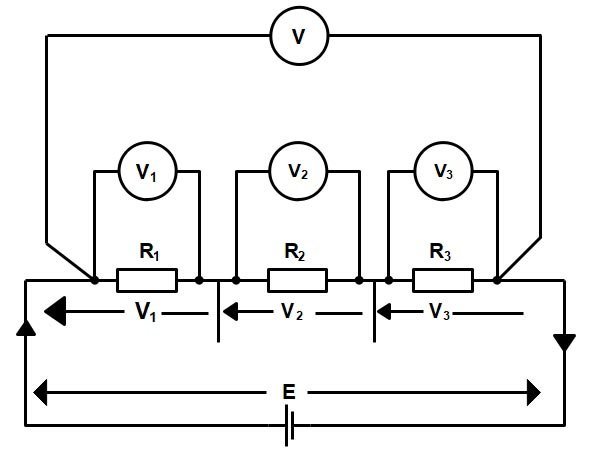 From Kirchhoff’s current law relation, the sum of the voltage drops around any closed path is equal to the supply voltage. This may be expressed as follows:

From Ohm’s Law, we know that E or V

Substituting E and V we have

Since the current is common to each resistance, we can divide the whole equation by I

Solving the above equation we get

Where RT is the total resistance of the circuit

So for a series circuit, the total resistance is simply the sum of the individual resistance

There are several important characteristics of series circuits:

At mains level (i.e. 230 V) or higher supply voltages, an open circuit occurring in a series circuit could result in a potentially hazardous situation. As no current flows, no voltage drops (i.e. the product of current and resistance) can occur across the healthy resistors — leaving the full circuit voltage to appear across the break in the circuit.

Suppose that four resistance are connected in series having the supply voltage of 200 V. Assume that R2 fails (Open) and creates an open circuit.

From the above discussion it is clear that, In the case of an open circuit in a series circuit, the full supply voltage will appear across the break in the circuit — creating a potentially hazardous situation.

The arrangement of lights and various other electrical appliances in the series circuit is not used in domestic wiring because of the following disadvantages:

Solved Example of Resistance in series

Ques.1. A circuit comprises four components, having resistances of 8Ω, 2Ω, 4Ω, and 6Ω connected in series. If the circuit is connected across a 200-V supply, calculate:

Sol:- The circuit diagram of the above Question is shown in the figure

(1) The total resistance in the circuit

(2) Total current in the circuit

For Concept Of Resistance and Ohm’s Law Click Here