Ques 1. The consideration involved in the selection of the type of electric drive for a particular application depends upon

Motor control is required in the large number of industrial and domestic applications such as transportation systems, rolling mills, paper machines, textile mills, machine tools, fans, pumps, robots, and washing machines. Systems employed for motion control are called drives and may employ any of the prime movers.

Ques 2. Which of the following motor is preferred for automatic drives?

The Ward-Leonard system consists of a fixed speed 3-phase AC induction motor driving by separately excited DC generator that, in turn, feeds a variable voltage to a shunt wound DC motor. So this is essentially a DC variable speed drive.

The basic principle of the DC variable speed drive is that the speed of a separately excited DC motor is directly proportional to the voltage applied to the armature of the DC motor. The main changes over the years have been concerned with the different methods of generating the variable DC voltage from the 3-phase AC supply.

Ward Leonard control of dc machines is considered as one of the most elegant and efficient methods of speed control over a wide range. The schematic diagram of the control technique is shown in Figure. The system consists of a separately excited generator feeding power to the dc motor to be controlled. The generator, “G” is driven at a constant speed by an ac motor connected to the ac mains. The driving motor may be an induction motor or a synchronous motor. Where ac mains are not available, a diesel engine or a gas turbine acts as a prime mover to run the generator. This generator drives a motor ‘ M”. The motors “G” and ‘ M” must be of equal rating. 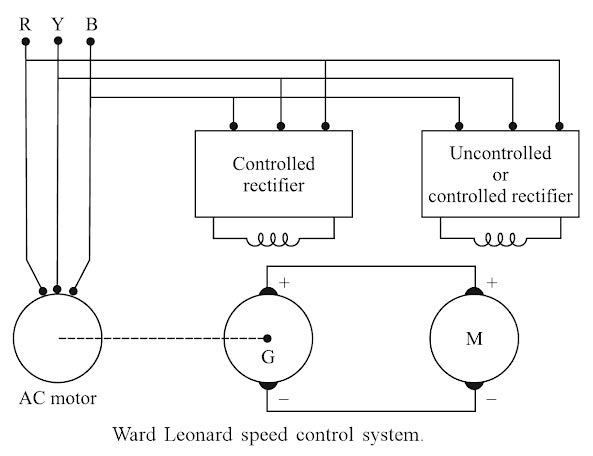 One of the advantages of Ward Leonard drive system is its ability for regenerative braking, thereby delivering power to the grid, corresponding to low motor speeds. For regenerative braking, the output voltage of generator “G” is reduced below the induced voltage of the motor “M” by decreasing the generator field excitation. This reverses the current flow in the armature of the machines “G” and “M”.

As the current is reversed, the machine “G” will act as a motor and the machine “M” will act as a generator. The mechanical energy supplied to the machine “M” is converted into electrical energy; which is now supplied to the machine “G’ [presently working as a motor]. The machine “G” will act as a prime mover for the ac machine which will now work as generator feeding power to the grid. The nature of the speed-torque characteristic is similar to that shown in Figure. Drop in motor speed due to change in load torque is caused by Iara drop in both the machines. When the generator output voltage is high, the motor speed is automatically high. The Iara drop in both machines will be negligible compared to their outputs. Therefore, the % speed regulation of the motor will be excellent. The Ward Leonard drive is used in steel rolling mills, paper plants, elevators, machine tools.

The main advantages of Ward Leonard scheme are:

The main disadvantages of Ward Leonard scheme are:

Nowadays, static Ward-Leonard drives, using two thyristor bridge rectifiers (converters) connected back to back, are used to eliminate the above drawbacks.

More precise and smooth speed control over a wide range such as 200:1, and even higher, is accomplished in which there are no sources of noise and vibration. In such an adjustable voltage system, higher torque-speed characteristics can be obtained by providing id compensation. Soft starting can also be incorporated.

Non-electrical prime movers can be used to drive the dc generator of the Ward-Leonard drive. For example, in diesel-electric locomotives and ship propulsion drives, the generator is driven by a diesel engine or a gas turbine.

Ques 3. The consideration involved in the selection of the type of electric drive for the Load Variation application depends upon

Selection of Motor based on Load Variation

Electrical drives may be grouped into the following three cate^lpriee:

Group drive:- A drive in which a single electric motor drives a line shaft by means of which an entire group of working machines may be operated is called group drive. It is also sometimes called as the line shaft drive. The line shaft is fitted with multi-stepped pulleys and belts that connect these pulleys and the shafts of the driven machines serve to vary their speed.

Ques 5. The advantages of a group driver electric drive are

Saving in the initial cost: One 150 kW motor costs much less than ten 15 kW motors required to drive 10 separate machined

High Efficiency:- The efficiency and power factor of a large group drive motor will be higher, provided it is operated fairly near its rated load.

Continous start and stop:- Group drive can be used with advantage in those industrial processes where there is the sequence of continuity in operation and where it is desirable to stop these processes simultaneously as in a ﬂour mill.

Group drive is adopted, when existing factories are changed from engine drive to electric motor drive simply by replacing the oil or steam engine by an electric motor of corresponding output retaining all the old shafts and belts.

Ques 7. In __________ drive each machine is driven by its own separate motor with the help of gears and pulley

Individual drive. In “individual drive”, each machine is driven by its own separate motor with the help of gears, pulley etc.
Examples: Single-spindle drilling machines, various types of electrical hand tools and simple types of metal working machine tools and mechanisms.

Ques 8. The advantages of the individual drive is/are

Answer 4. All of the above

The only disadvantage of the individual drive is its high cost.

Ques 9. The drive which is used for metal-cutting machines tools, rolling mills etc. are

Multimotor drive:- In “multi-motor drives” separate motors are provided for actuating different parts of the driven mechanism.
Example: In traveling cranes, three motors are used: one for hoisting, another for long travel motion and third for cross travel motion.

The use of individual drives and multi-motor drives has led to the introduction of automation in production processes which, apart from increasing the productivity of various undertakings, has enhanced the reliability and safety of operation.

Ques 10.  What is the total annual cost of a group drive with a motor costing Rs.18000  with that of 10  individual motors, each costing Rs. 5000. The annual consumption is 80000 kWh. Electrical energy costs 20 paise per kWh. Depreciation, maintenance, and other ﬁxed charges amount to 10 percent.