1. What is the main purpose of earthing?

2. The earth resistance can be measured by 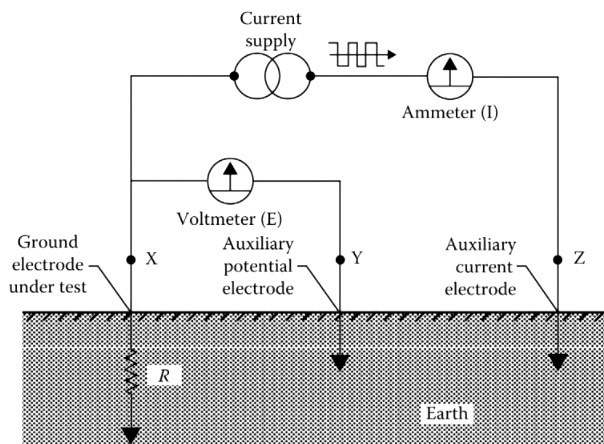 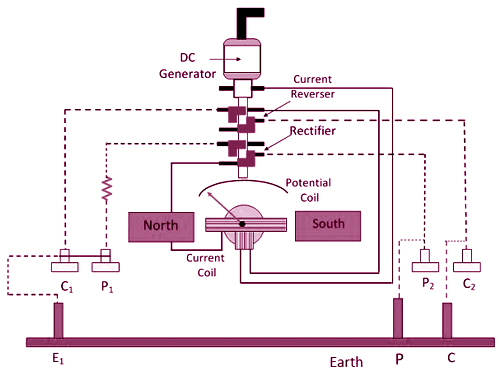 The earth tester is a special type of ohmmeter which sends ac through earth and de through the measuring instruments as shown in Fig. The direction of flow of current in the ground keeps on alternating due to current reverser whereas current direction in the two crossed coils of ohmmeter remains the same due to potential reverser. The current reversal and potential reversal are mounted on the main shaft of the hand-driven dc generator.

The ohmmeter consists of two coils mounted at a fixed angle to one another on a common axle and moving in the field of a Permanent Magnet (PM). A current proportional to the total current flowing in the testing circuit passes through the Current Coil (CC), while the Potential Coil (PC) carries a current proportional to the potential drop across the resistance under test. The cross-coil system makes the instrument a true ohmmeter giving readings in ohms that are independent of the applied voltage, speed of rotation, and contact resistance of the ground rods.

Direct current from the generator passes through the current coil of the ohmmeter to a rotating current reverser driven from the generator handle. The alternating current is thus delivered to the current terminals (the common terminals C1 and C2) of the instrument which are connected to the contact under test and to the “current” temporary earth connection. The potential coil of the ohmmeter obtains its supply from the potential terminals (common terminal P1 and the terminal P2), the latter being connected to the ‘potential’ temporary earth connection.

4. Which of the following error encountered on the fall of potential method

Several problems and errors may be encountered with the fall of the potential methods, such as

(ii) The resistance of auxiliary electrode and electrical leads may introduce errors in the voltmeter reading.

This error can be minimized by using a voltmeter of a high impedance value.

5. Three-point method is also known as

The ground resistance can be measured using a technique known as the fall-of-potential method. The method, which is also known as the three-point test.

6. Four-point method is also called as

To measure earth resistivity, a four-terminal instrument is used, along with four small-sized electrodes driven down to the same depth and equal distances apart in a straight line. Four separate lead wires connect the electrodes to the four terminals on the instrument, as shown. Hence the name of this test: the four-terminal method. 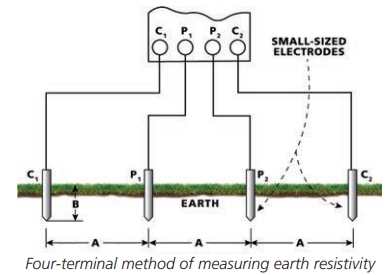 If the electrode depth (B) is kept small compared to the distance between the electrodes (A), the following formula applies:

ρ is the average soil resistivity to depth A in ohm-cm,

A is the distance between the electrodes in cm,

R is the Megger earth tester reading in ohms.

7. The earth resistivity is measured in

The term “earth resistivity” expressed in ohm-centimeters (abbreviated ohm-cm) is one basic variable affecting resistance to earth of an electrode system.

Measurements of earth resistivity are also useful for finding the best location and depth for low resistance electrodes, as well. Such studies are made, for example, when a new electrical unit is being constructed, such as a generating station, substation, transmission tower, or telephone central office.

8. Touch potential measurements are similar to

Touch potential: Touch potential is the voltage difference between a person’s arm and the feet, caused by the voltage gradient due to fault or induced current. It is assumed that the current passes through the heart and therefore this potential should be kept to near zero to safeguard personnel who might accidentally come in contact with equipment and structures in a switchyard or substations. 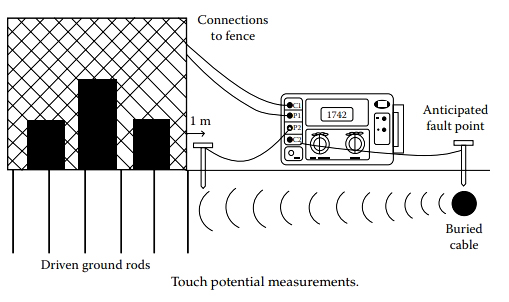 9. Which of the following method is used for the measurement of earth resistance without the use of an auxiliary rod.

The clamp-on method measures the ground resistance based on Ohm’s law and need to have a series and parallel resistors. In this method, two clamps namely voltage and current transformers are used. During measurement, these two clamps connect either with the earth electrode or connecting cables with a separation distance of more than a 4 inches. as shown in Fig. 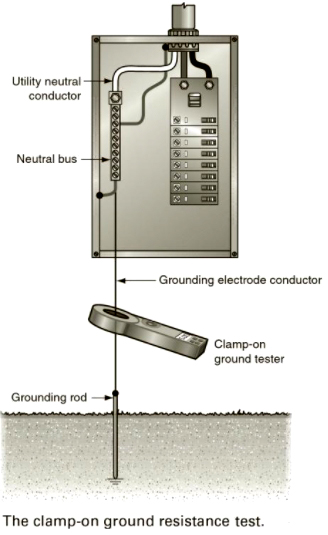 10. Which of the following are the advantages of the clamp-on ground method as compared to the fall of the potential method

(i) The clamp-on ground method eliminates the dangerous and time-consuming activity to disconnect the grounding system.

(ii) The clamp-on method is fast and easy as no probes need to be inserted into the soil.

(iii) The service grounding system does not have to be disconnected and isolated from the neutral bus.

(iv) There are no probes that have to be driven into the ground or long connecting conductors.

(v) The neutral conductor supplied by the utility company ties innumerable grounds together in parallel. The clamp-on ground tester measures the effective resistance of the entire grounding system.

(vi) Because this test is performed by a clamp-on meter, there are no connections that have to be broken or reconnected, resulting in a safer procedure.

11. Which of the following is/are limitations of the clamp-on ground method?

(i) The clamp-on ground method of measurement is not suitable for a single or isolated grounding system as there is no return path for the current.

(iii) The clamp-on method is only effective in situations with multiple earthing electrodes are in parallel and a closed circuit is available for the current circulation.

(iv) This method does not give the actual value of the ground resistance if the clamps are placed at the bonded lightning protection system.

(v) It may also give a very low reading due to the interaction of two buried water pipes and conduits.

(vi) It cannot be used on isolated grounds, thus making it in-applicable for installation checks or commissioning new sites.

(vii) Measurement of low earth resistance of the order of 0.5 ohms is difficult with this method.

(viii) The internal diameter of the clamp is usually small of the order of 25 mm which prevents the measurement of earth rods greater in size.

12. _______ method uses a Wheatstone bridge or an ohmmeter to measure the series resistance of the grounding electrode and the auxiliary electrode.

The ratio Method uses a Wheatstone bridge or an ohmmeter to measure the series resistance of the grounding electrode and the auxiliary electrode. 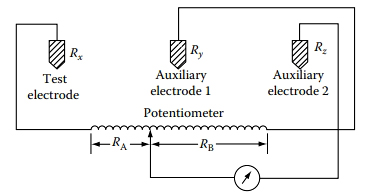 13. The extension of fall of potential method is also known as

The 62% method is an extension of the fall-of-potential method and has been adopted after graphical consideration and after the actual test. It is the most accurate method but is limited by the fact that the ground tested is a single unit. This method applies only when all three electrodes are in a straight line and the ground is a single electrode, pipe, or plate, etc.

This adaptation is often referred to as the 62% Method, as it involves positioning the inner test stake at 62% of the earth electrode-to-outer stake separation (recall that in the Fall-of-Potential method, this figure was 50%).

When using this method, it is also advisable to repeat the measurements with the inner test stake moved t10% of the earth electrode-inner test stake separation distance, as before.

The main disadvantage with this method is that the theory on which it is based relies on the assumption that the underlying soil is homogeneous, which in practice is rarely the case. Thus, care should be taken in its use and a soil resistivity survey should always be carried out. Alternatively, one of the other methods should be employed.

14. The voltage range of the earth tester is usually

Earth tester instrument usually has the voltage range of 10-110 V with a current range up to 5 mA, frequency of about 92-95 Hz, ohmic range from 0-2 up to 10,000 ohms. Indigenous designs are available in the test voltage range of 50-200 V approximately.

15. The slope method for measurement of ground resistance is usually employed in

The slope method is usually used to measure the ground resistance at any substation where a large grounding system is installed. Sometimes, it is difficult to get the flat section of the measured ground resistance versus the distance to the potential probe from the earth electrode. This situation is generally happening when the potential and the current probes are always within the zone of the influence of the earth electrode under test.

The additional measurement and calculation effort tend to relegate this system to use with only very large or complex grounding systems.