Emf is induced in the armature windings due to the cutting of flux by the rotation of the rotor poles. Distribution of coils in the stator slots and the use of short-pitch coils affect the magnitude and the waveshape of the induced coil. 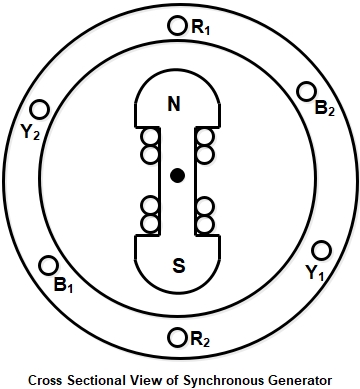 Let us assume that

T = The number of turns in the coils connected in series in each phase.

P = The number of poles

N = Number of rpm of the rotor. The rotor poles make N revolutions per minute (i.e. per 60 s)

Time taken by the rotor poles to make one revolution

If f is the frequency of induced EMF the relationship between f, P, and Ns is given by

For a sinusoidal wave, the ratio of RMS value and average value is called the form factor which is equal to 1.11

The E.M.F equation per phase is given as:

This EMF equation is the same as that developed for transformers where the EMF in the primary and secondary windings were derived respectively as Eph1 = 4.44.φm.f.N1, and Eph2 = 4.44.φm.f.N2.

With Kd and Kp into consideration, the equation for the induced EMF is