Necessity of Parallel Operation of Alternator

When the number of alternators is connected to the same bus-bars, they are called to be connected in parallel. In short, the requirement of parallel operation of alternator arise due to:-

NOTE:- If we want to connect one alternator in parallel with other alternators already connected to the bus, we have to see that there is no disturbance created on the has and no trip-off of any unit in the circuit occurs. The process by virtue of which this connection of an alternator to the bus is made is termed synchronization.

Requirements for Parallel Operation of Alternator

When alternators are connected to parallel, they must satisfy the following conditions.

NOTE:- The procedure of connecting an alternator in parallel with another or with a common bus-bar to which a number of alternators are already connected is called synchronizing of alternators. When two alternators are in step, they are said to be in synchronism. Alternators cannot be paralleled until their voltages, frequencies, and instantaneous polarities are nearly equal.

Conditions for Parallel Operation of Alternator

For proper synchronizing of alternators, the following conditions must be fulfilled:

If Conditions of parallel operation of the alternator is not matched

Note:- There are two circuits to which current can be supplied by the alternators. One circuit is the external load(i.e the relation between the bus voltage and load current it supplies) and the other is the local internal circuit( i.e., the synchronous impedance of the two alternators or impedance generated within a single generator). 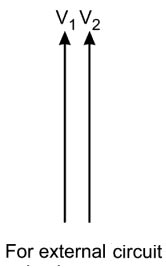 For correct synchronizing, the frequency of the incoming alternator must be the same as that of the frequency of the alternator already connected to the bus-bars i.e., the vectors representing the two voltages must rotate at the same speed. But if this condition is not fulfilled, one of the vectors rotates at speed higher or lesser than the other vector (say vector V, is rotating at a speed higher than vector Vi). The position of the two vectors at different three instants is shown in Fig. 7.3. Thus, the voltages of the two alternators will come in phase and go out of phase. This will happen at the rate equal to the difference of the frequencies of the two alternators. Because of this for local circuit, the resultant voltage E, varies from zero to double the voltage (VI + V2) and circulates variable current in the local circuit.