Arc in a circuit breaker is interrupted at

Arc in a circuit breaker is interrupted at

After the occurrence of the fault, when the contacts of the CB begin to separate an arc is established in the contact gap.

The two main causes responsible for generating an arc between the contacts of a CB are as follows:

There are two methods of extinguishing the arc in CB  viz.

In this method, arc resistance is made to increase with time so that current is reduced to a value insufficient to maintain the arc. Consequently, the current is interrupted or the arc is extinguished. The principal disadvantage of this method is that enormous energy is dissipated in the arc. Therefore, it is employed only in DC CBS and low-capacity AC CBs.

The resistance of the arc may be increased by:

In an AC system, the current drops to zero after every half cycle. At every current zero, the arc extinguishes for a brief moment. Now the medium between the contacts contains ions and electrons so that it has a small dielectric strength and can be easily broken down by the rising contact voltage known as restriking voltage. If such a breakdown does occur, the arc will persist for another half cycle. If immediately after current zero, the dielectric strength of the medium between contacts is built up more rapidly than the voltage across the contacts, the arc fails to restrike and the current will be interrupted. There are two theories to explain the zero current interruption of the arc.

The arc is a column of ionized gases. To extinguish the arc, the electrons and ions are to be removed from the gap immediately after the current reaches a natural zero. ions and electrons can be removed either by recombining them into neutral molecules or by sweeping them away by inserting insulation medium (gas or liquid) into the gap. The arc is interrupted if ions are removed from the gap at a rate faster than the rate of ionization. In this method, the rate at which the gap recovers its dielectric strength is compared with the rate at which the restriking voltage (Transient voltage) across the gap rises. If the dielectric strength increases more rapidly than the restriking voltage, the arc is extinguished. If the restriking voltage rises more rapidly than the dielectric strength, the ionization persists and breakdown of the gap occurs, resulting in an arc for another half cycle. 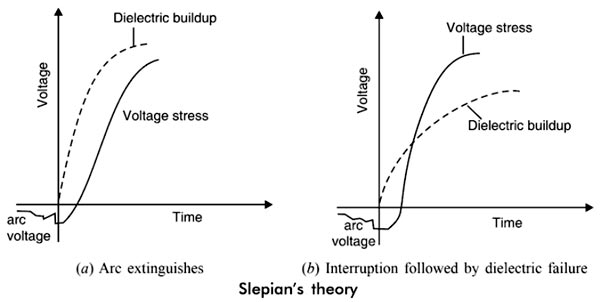 The space between the contact contains some ionized gas immediately after current zero and hence, it has a finite post-zero resistance. At the current zero moments, power is zero because the restriking voltage is zero. When the arc is finally extinguished, the power again becomes zero, the gap is fully deionized and its resistance is infinitely high In between these two limits, first, the power increase reaches a maximum value, then decreases and finally reaches zero value. Due to the rise of restriking voltage and associated current energy is generated in the space between the contacts. The energy appears is in the form of heat. The circuit breaker is designed to remove this generated her as early as possible by cooling the gap, giving a blast of air or flow of oil at high velocity and pressure. If the rate of removal of heat is faster than the rate of heat generation the arc is extinguished if the rate of heat generation is more than the rate of heat dissipation, space breaks down again resulting in an arc for another half cycle. 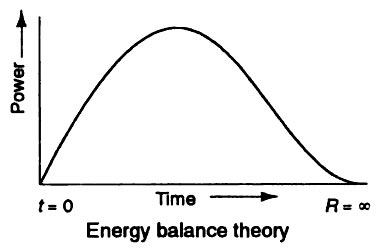