The effective turning off SCR after the anode current has reached zero value.

The effective turning off SCR after the anode current has reached zero value.

The charge is removed by applying reverse anode-cathode voltage

Normal thyristors (silicon-controlled rectifiers) are not fully controllable switches (a “fully controllable switch” can be turned on and off at will). Thyristors can only be turned ON using the gate lead, but cannot be turned OFF using the gate lead. Thyristors are switched ON by a gate signal, but even after the gate signal is de-asserted (removed), the thyristor remains in the ON-state until a turn-off condition occurs (which can be the application of a reverse voltage to the terminals or a decrease of the forward current below a certain threshold value known as the “holding current”). Thus, a thyristor behaves like a normal semiconductor diode after it is turned on or “fired”.

The term commutation basically means the transfer of current from one path to another. Commutation is one of the fundamental principles of the use of thyristors for control purposes. A thyristor can only operate in two modes: it is either in the OFF state, i.e., open circuit, or in the ON state, i.e., short circuit. By itself, it cannot control the level of current or voltage in a circuit. Control can only be achieved by variation in He time thyristors when switched ON and OFF, and commutation is central to this switching process.

There are three methods of switching off the SCR, namely natural commutation, reverse bias turn-off, and gate turn-off.

When the anode current is reduced be­low the level of the holding current, the SCR turns off. However, it must be noted that rated anode current is usually larger than 1,000 times the holding value. Since the anode voltage remains positive with respect to the cathode in a dc circuit, the anode current can only be reduced by opening the line switch S, increasing the load impedance RL or shunting part of the load current through a circuit parallel to the SCR, i.e. short-circuiting the device. 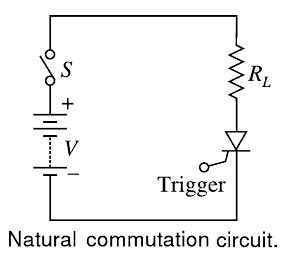 A reverse anode to cathode voltage (the cathode is positive with respect to the anode) will tend to interrupt the anode current. The voltage reverses every half cycle in an ac circuit so that an SCR in the line would be reverse biased every negative cycle and would turn off. This is called phase commutation or ac line commutation. To create a reverse biased voltage across the SCR, which is in the line of a dc circuit, capacitors can be used. The method of discharging a capacitor in parallel with an SCR to turn-off the SCR is called forced commutation.

In power electronic applications one advantage of using SCRs is that they are compact. The control equipment is also compact if integrated circuits are used. There has also been an attempt to miniaturize capacitors used for forced commutation and for filtering. The former use is important because the currents can be high and thermal dissipation takes high priority in design considerations. Small sizes of capacitors are at present being achieved by the use of metalized plastic film or a plastic film and aluminum foil.

In some specially designed SCRs, the characteristics are such that a negative gate current increases the holding current so that it exceeds the load current and the device turn-off. The current ratings are presently below 10 A and this type will not be considered further.