Which of the following medium is employed for the extinction of arc in air circuit breaker?

Which of the following medium is employed for the extinction of arc in air circuit breaker?

Air circuit breakers are normally only used at low voltage levels but are available with high current ratings up to 6,000 A and short circuit ratings up to 100 kA at 500 V. The physical size of such units, which contain large arc chutes, quickly makes them uneconomic as voltages increase above 3.6 kV.

The air-break circuit breakers are available in the range of 415 volts to 11 kV rating, the rated continuous current ranging from 100 to 4000 A and breaking current capacity up to 80000 A. As the name suggests, the insulation between the two contacts in air at normal temperature and pressure. The operating mechanism can be pneumatic, solenoid-operated, or spring-operated. In the case of a spring-operated mechanism, the spring is to be charged by an induction motor (motor-operated spring mechanism). The performance and cost of the breaker are mainly decided by its breaking capacity. While breaking the fault currents, large electrodynamics forces are produced, not only due to high current but also due to the asymmetry of the fault current. 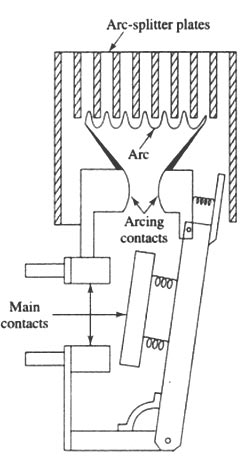 These electrodynamics forces act on the operating mechanism and because of these forces, there is a tendency for contact opening. This may deteriorate the contact surfaces. Immediately after the fault current is interrupted large high-frequency voltage transients are produced across the contacts. Both of these, high voltage and high currents decide the breaking capacity (i.e., the capacity of the breaker to deal with high currents without being damaged).