In mercury arc rectifier the mercury is used as

In mercury arc rectifier the mercury is used as

Similar to a common diode, a mercury arc rectifier consists of a cathode and an anode. Mercury is used as the cathode and the anode is made of iron.

When the rectifier is in operation, mercury forms an arc between the mercury surface and the iron anode. This arc contains ionized mercury vapor consisting of electrons and positive ions. The area on the surface of the mercury where the arc concentrates is known as the cathode spot. This is a region of high temperature and most of the ionization (formation of irons by the loss of electrons), takes place here. In the arc, the electrons are attracted by the positive anode whereas positive ions are attracted by the negative cathode. Since the positive ions are heavy, they carry a lot of kinetic energy which is released in the Bonn of heat energy when they strike the cathode. 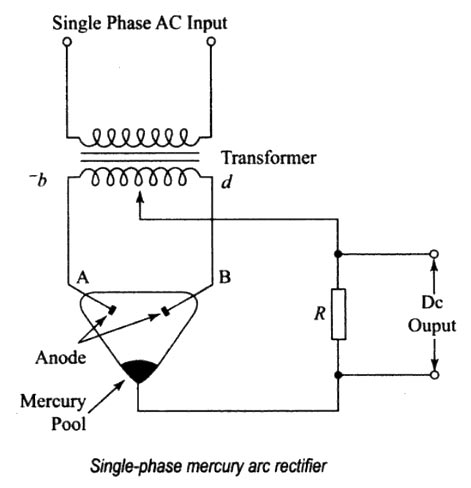 A part of or all the mercury vaporizes and the vapor atoms ionize and serve as the conducting medium in the tube. Hence the mercury vapor may be used as the conducting medium in a diode of the gas-filled type and is widely used in heavy-duty rectifiers. Just as in other types of diodes, the cathode of the mercury-vapor rectifier must be heated before conduction can take place. The use of mercury as the cathode permits the rectifier to withstand heavy momentary overloads without damage. The heat of the arc produces the necessary ionization of the mercury vapor, and conduction takes place through the external anode circuit if complete.