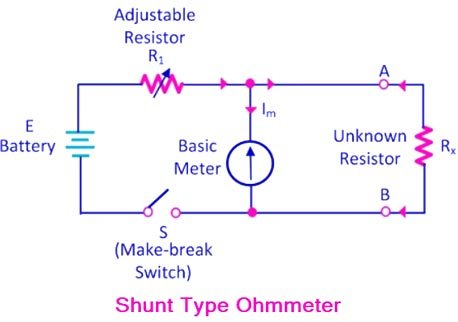 The shunt type ohmmeter consists of a battery in series with an adjustable resistance R1 and a meter movement.

The switch is provided to disconnect the battery when the instrument is not in use. The unknown resistance is connected in parallel with the meter hence the name given to the instrument is shunt type ohmmeter.

When the terminals A-B are opened i.e. Rx = ∞ then the entire current flows through the meter hence pointer deflects to the maximum. The resistance R1 is then adjusted such that the current through the meter is its full-scale deflection current. This position of the pointer is marked as ∞.

Thus the scale is marked from 0 to infinite and not reversely from infinite to 0 as in the case of the series ohmmeter.