In the case of staircase wiring which type of switch is used?

In the case of staircase wiring which type of switch is used?

Staircase wiring is commonly used for staircase and corridor lighting. Normally, only a single light lamp is provided in a staircase which is controlled by either of the two switches – one installed at the top and other at the bottom. Similar is the situation in a bathroom common to two rooms The light lamp in the bathroom can be controlled by the switches installed in the two rooms. 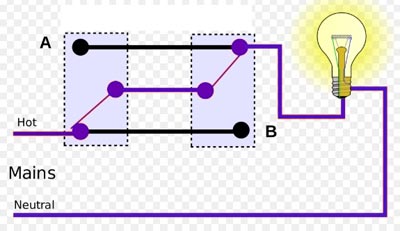 Suppose you are at the top of the staircase and the light is in switched off condition, you can switch the light on as you go down, then switch it off as you leave.