1. Which of the following is/are the applications of the Wheatstone bridge?

1. The Wheatstone bridge is basically a d.c. bridge and used to measure the medium resistance in the range 1Ω to low megaohm.

2. It is used to measure the D.C. resistance of various types of wire either for the purpose of quality control of the wire itself or of some assembly in which it is used.

3. It is used by telephone companies to locate cable faults. The fault may be two lines shorted together, or a single line shorted to the ground. If there is a fault on the cables, the Wheatstone bridge can be used to find the location of the fault by using the known resistance per meter of the cables.

4. It is used for the Measurement of the resistance of motor windings, transformers, solenoids, and relay coils.

2. How can a Wheatstone bridge be used for the measurement of physical parameters?

Answer.4. By making use of a transducer

An unbalanced bridge condition occurs when is not equal to zero. The unbalanced bridge is used to measure several types of physical quantities such as mechanical strain, temperature, or pressure. This can be done by connecting a transducer in one leg of the bridge, as shown in Figure. 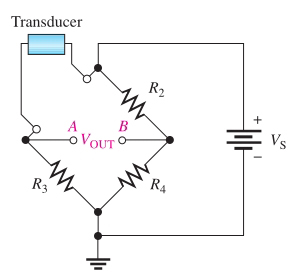 Answer.1. Line to Line or Line to ground

4. Telephone companies make use of the Wheatstone bridge for ________

5. Thermal compensation can be provided in a Wheatstone bridge by _______

Compensation of the temperature effect in a bridged network is accomplished by putting dissimilar gages into adjacent bridge arms. 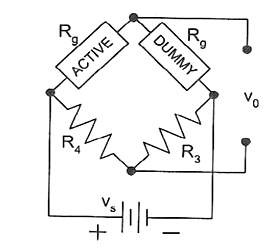 The active gauges are connected in opposite arms of the Wheatstone bridge so that the contribution of each to the output could be expressed as a sum. Under a positive strain (tension) will increase in length and decrease in diameter, resulting in an increase in resistance. A compressive force will decrease the wire length, increase the diameter, and Lower the resistance.

Dual element gauges are also employed (one having positive and the other negative response to temperature changes) will cancel out each other’s effects within a set temperature range.

The most frequently employed method is the use of dummy elements. The dummy gauge is mounted on the same surfaces as the active element, and is exposed to the same temperature, but is not subject to the forces applied. If such a dummy is connected in a Wheatstone bridge arm adjacent to the active element, it will automatically compensate for temperature effects.

7. Wheatstone bridge is used to measure the d.c. resistance of various types of wires for _________

Wheatstone bridge is used to measure the D.C. resistance of various types of wire either for the purpose of quality control of the wire itself or of some assembly in which it is used.

Answer.4. Measure quantities such as capacitance, inductance, and impedance

A Wheatstone bridge consists of resistive arms. It is used for the measurement of quantities such as capacitance, inductance, and impedance by making use of the variations such as Wien’s bridge because the ratio can be applied to these quantities as well.

9. Which of the following test employed the Wheatstone bridge to detect the location of the fault in underground cables?

Loop Tests For Location of Faults in Underground Cables

There are several methods for locating the faults in underground cables. However, two popular methods known as loop tests are

These simple tests can be used to locate the earth fault or short-circuit fault in underground cables provided that a sound cable runs along the faulty cable. Both these tests employ the principle of the Wheatstone bridge for fault location.

10. One of the simplest applications of a Wheatstone bridge is _______