1. The advantage of ILD over LED is

ILD (Injection laser diode) produces coherent radiation in which the waves generated by the ILD are at the same frequency. ILD emits coherent light whereas LED emits incoherent light.

Comparison between ILD and LED is shown in the following table:

2. What does LED stand for?

3. A low resistance LDR of 20Ω, operated at a certain intensity of light, is to be protected through a series resistance in such a way that up to 12 mA of current is to flow at a supply voltage of 10 V. What is the nearest value of the protective resistance?

According to the question, we can draw circuit as: 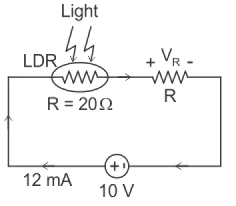 By voltage division rule, we can write:

Hence, the nearest value of the protective resistance should be 813 Ω to protect LDR.

The given circuit can be drawn as 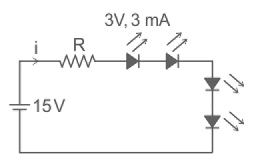 The current through the LED circuit must be 3 mA and the voltage drop across them is 3 V each.

Therefore, by applying KVL, we get,

5. When the LED lights need a range of voltages to operate, Which of the following drivers is best suited for the job?

6. The output from a laser is monochromatic, this means that it is

A monochromatic laser emits only one wavelength i.e. single frequency & therefore reduces or does not contribute to chromatic dispersion.

7. Which of the following LED colors is NOT present in an LED TV panel?

1) A LED display is a flat panel display that uses an array of light-emitting diodes as pixels for a video display.

2) LED displays can offer higher contrast ratios than a projector and are thus an alternative to traditional projection screens.

3) LED display consists of a matrix of red, green, and blue diodes.

8. The efficiency of an LED for generating light is directly proportional to the

9. What color LED lamp is commonly used for domestic use?

10. ______ light-sensing device that is used to sense the intensity of light

Photo-diode is a light-sensing device that is used to sense the intensity of light. Some of the examples are the smoke detector, a receiver in tv for converting remote signals, etc.