Ques.1. The resistivity of a semiconductor ____________ conductors and insulators

Answer.2. Lies between that of

A semiconductor atom having four valence electrons and four holes require four more electrons so as to make the outermost orbit completely filled (total number must be eight). The atoms in a crystal are arranged so closely that electrons orbit in valence shells of two atoms. Each valence shell electron fills the hole of the neighboring atom as shown in Fig. In the figure, atoms of silicon material have been shown. For ease of understanding, only the outermost orbits of atoms have been shown. 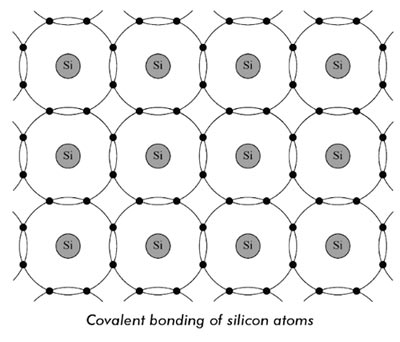 A semiconductor material, silicon or germanium where the electrons are bound to their respective atoms and are not free to conduct electric current, are called intrinsic, or pure semiconductors. When the temperature of the crystal is raised, external energy in the form of heat gets applied to the semiconductor material. This heat energy enables the valence electrons to acquire sufficient energy to break away from the atoms and become free electrons. When an electron leaves to become free, it leaves a vacant space called a hole. For every free electron, there will be a corresponding hole produced, which is called an electron-hole pair. A large number of such electron-hole pairs are formed due to rise in temperature of the semiconductor.

High-speed semiconductors widely use gallium-arsenide. It is the most commonly used material after silicon; however, it is more expensive and more difficult to manufacture. Silicon carbide has been used to create blue light-emitting diodes (LEDs), and it can withstand high operating temperatures.

Ques.4. In a semiconductor, the energy gap between the valence band and conduction band is about________

The important property of electrons is determined by the rule that is called the Pauli exclusion principle. According to this principle, not more than two electrons with different spins can occupy each energy state. Electrons occupy the lowest energy levels first. In semiconductors and dielectrics, almost all the states in the lowest energy bands are filled by electrons, whereas the energy states in the higher energy bands are, by and large, empty.

The lower energy bands with mostly filled energy states are called the valence bands. or The band formed by a series of energy levels containing the valence electrons is known as valence band. The valence band may be partially or completely filled up depending upon the nature of the crystal.

Semiconductors have the same type of band structure as an insulator; but the energy gap is much smaller, on the order of 1 eV. The forbidden energy gap for germanium is 0. 7 em and for silicon 1.1 em The band structure of a semiconductor is shown in Figure. Because the Fermi level is located near the middle of the gap for a semiconductor and Energy gap Eg is small, appreciable numbers of electrons are thermally excited from the valence band to the conduction band. Because of the many empty levels above the thermally filled levels in the conduction band, a small applied potential difference can easily raise the energy of the electrons in the conduction band, resulting in a moderate current. 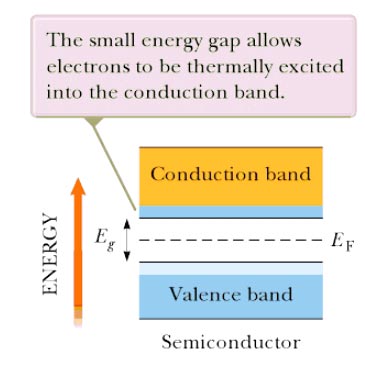 Charge carriers in a semiconductor can be negative, positive, or both. When an electron moves from the valence band into the conduction band, it leaves behind a vacant site, called a hole, in the otherwise filled valence band. This hole (electron-deficient site) acts as a charge carrier in the sense that a free electron from a nearby site can transfer into the hole. Whenever an electron does so, it creates a new hole at the site it abandoned. Therefore, the net effect can be viewed as the hole migrating through the material in the direction opposite the direction of electron movement. The hole behaves as if it were a particle with a positive charge +e.

Note:- The energy gap of an insulator is 5 eV

The energy gap of the conductor is 0 eV

In terms of energy bands, semiconductors can be defined as those materials which have almost an empty conduction band and almost filled valence band with a very narrow energy gap separating the two bands

Whereas in the case of conductors, when the temperature increases its resistivity increases as electrons collide more frequently with vibrating atoms. This reduces drift speed of electrons (and thus current reduces). Thus conductors have a positive temperature coefficient of resistance.

Ques.7. The resistivity of pure germanium under the standard condition is about

The ability of a material to conduct current is directly proportional to the number of free electrons in the material. Good conductors, such as silver, copper, and aluminum, have large numbers of free electrons; their resistivities are of the order of a few millionths of an ohm-centimeter. Insulators such as glass, rubber, and mica, which have very few loosely held electrons, have resistivities as high as several million ohm-centimeters.

Semiconductor materials lie in the range between these two extremes, as shown in Fig. Pure germanium has a resistivity of 60 Ω cm. Pure silicon has a considerably higher resistivity, in the order of 60,000 Ω cm. As used in semiconductor devices, however, these materials contain carefully controlled amounts of certain impurities, which reduce their resistivity to about 2 Ω cm at room temperature and this resistivity decreases rapidly as the temperature rises.

Semiconductor materials lie in the range between conductor and insulator, as shown in Fig. Pure germanium has a resistivity of 60 Ω cm. Pure silicon has a considerably higher resistivity, in the order of 60,000 Ω cm. As used in semiconductor devices, however, these materials contain carefully controlled amounts of certain impurities, which reduce their resistivity to about 2 Ω cm at room temperature and this resistivity decreases rapidly as the temperature rises.

Ques.9. When a pure semiconductor is heated, it’s resistance_______

In a pure semiconductor the four valence electrons of the crystal atom form covalent bonding and at low temperatures, free electrons are not available for conduction of electricity.

At 0 K, all valence electrons are strongly bound to their atoms and are actively participating in the covalent bond formation. As a result, no free electrons are available for conduction and it acts as an insulator. 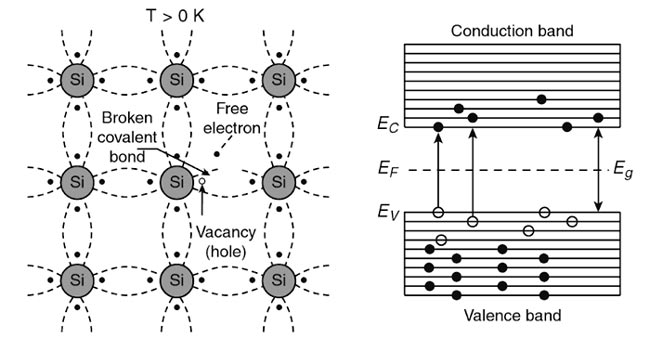 Ques.10. The strength of a semiconductor crystal comes from______

Crystal. Each atom that is normally bonded with the nearest neighbor atoms results in a special shape called a crystal (Fig). A silicon atom that is a part of a crystal has eight electrons in the valence orbit and four neighbor atoms. Each of the four neighbors shares one electron. Since each shared electron in Fig. is being pulled in opposite directions, it is a kind of a bond between the opposite cores. This type of bond is known as a covalent bond. The covalent bonds hold the tetravalent crystal together, ensuring its stability.

A semiconductor atom having four valence electrons and four holes require four more electrons so as to make the outermost orbit completely filled (total number must be eight). The atoms in a crystal are arranged so closely that electrons orbit in valence shells of two atoms. Each valence shell electron fills the hole of the neighboring atom as shown in Fig. 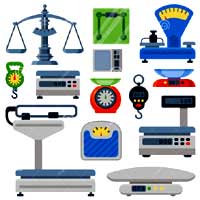