1. Energy per unit charge is termed as

Mathematically, it can be expressed as

2. The rate of flow of charge per unit time is called

The flow of electrons is called an electric current hence the current can be measured by the number of electrons passing through the material per second. In other words, the rate of flow of charge per unit time is called current. Current is measured in coulombs per second and one coulomb per second is called Ampere.

The relation between current and charge can be given as

3. The direction of convection electric current is taken from

The flow of charge through a conductor constitutes an electric current.

4. The device used to measure potential diffrence is

5. A conductor is said to have resistance of one ohm if a potential difference of one volt across its terminals causes a current of X ampere to flow through it. What will be the value of X?

Resistance is the property of a substance due to which it opposes the flow of electric current through it.

A conductor is said to have resistance of one ohm if a potential difference of one volt across its terminals causes a current of one ampere to flow through it.

6. The device used to measure the current is

7. For reference purpose the potential of the earth is taken as

Since the size of earth is large and it is a good conductor, the potential of earth remains constant regardless of the electrons taken from it or supplied to it. For this reason, earth is taken to be zero potential surface.

8. The conductors have transport phenomena of electrons due to 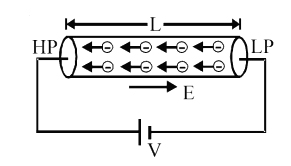 The field exerts an electric force on the free-electron causing acceleration of each electron.

9. The specific resistance of a conductor depends upon

where ρ is a constant depending on the nature of the material of the conductor and is known as its specific resistance or resistivity.

The charge is given as

The rate at which the electric work is done in an electric circuit is called electric power. The SI unit of power is joule per second or watt.

Ampere is the Unit of Current

Volt is the S.I unit of Potential Difference.

The unit of inductance is the henry (symbol H) and is defined as follows: ‘A circuit is said to possess an inductance of 1 H when an e.m.f. of 1 V is induced in that circuit by a current changing at the rate of 1 A/s’.

14. Which property of an electrical conductor opposes a change in the current?

An inductor is a device that temporarily stores energy in the form of a magnetic field. It is usually a coil of wire. One of the basic properties of electromagnetism is that when you have current flowing through the wire it creates a small magnetic field around it.

Once the current stop flowing the magnetic field start to collapse and the magnetic energy turned back into electric energy.

So when the current flowing through the inductor changes, the magnetic field also changes in the inductor, and emf (electromotive force) is induced in the inductor as per Faraday’s law of electromagnetic induction.

So the inductor opposes any change of current through them.

The Farad is the practical and the Sl unit of capacitance. The unit, named after Michael Faraday (1791-1867), was first suggested by Latimer Clark in 1867. The capacitor has a capacitance of 1 farad when a charge of 1 coulomb raises the potential between its plates to 1 volt.

16. Which property of an electrical conductor opposes a change in the current?

The amount of voltage (charge separation) that a capacitor can store is reflected by its capacitance (C), which is the ratio of the charge (Q) on either plate to the voltage (V) between the two plates (C = Q/V).

Also, the amount of charge that can be loaded onto a capacitor plate is proportional to the voltage and the capacitance of the capacitor (i.e., Q = VC).

In other words, capacitance is the amount of charge that you get for a given voltage. As the voltage increases, the charge increases.

The capacitor opposes the change in voltage. When we close the switch at time = 0, the voltage on the initially uncharged capacitor increases. With an ideal capacitor, the final voltage is equal to the battery voltage. The “rise time” is a function of the capacitor size and the value of the resistor.

Energy from the battery is transferred to the capacitor. We say that work is done in this process. Our universe does not allow infinite changes in energy because there is a limit to the rate at which work can be done.

Since there is always resistance, there will always be a limit to the amount of current that can flow in this circuit. This imposes a limit on the time it takes to transfer energy from the battery to the capacitor. Yes, the resistor changes some of the battery’s energy to heat.

17. Which of the following is the dimensional formula for conductance or conductivity?

The conductance is given as

Now the Dimensional formula of conductance will be

18. Which of the following is the dimension of resistance?