Resistance and Impedance are the technical terms used in an electric circuit. In brief, the resistance controls the flow of current in either DC or A.C circuit on the other hand impedance is used to control the flow of current in an A.C circuit only. In this article, we will try to explain the difference between resistance and Impedance based on various factors like Power factor, Phase angle, measuring instrument, and many more.

Definition of Resistance and Impedance

When an electric potential difference of ‘V’ volts is applied across the two terminals of conducting material, the free electrons of the material align in a row and reach the positive terminal of the supply (cell) promptly. 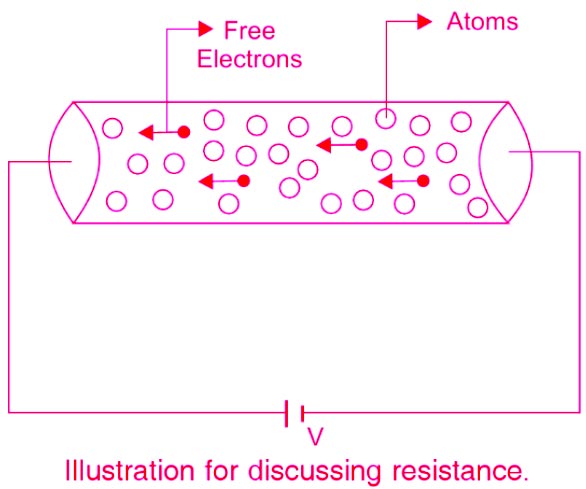 Resistance:- The opposition to the flow of DC current caused by the nature and physical dimensions of a conductor. Resistance is represented by the symbol “R” and it is measured in ohm (Ω). 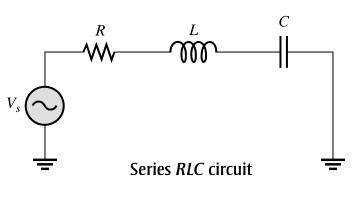 Unlike resistive circuit, the impedance circuit consists of addition elements i.e capacitance and inductance connected in series or parallel

Since AC constantly changes direction and intensity, inductors and capacitors may also create opposition to current flow in AC circuits. The opposition offered to the flow of AC current by the inductance capacitance or both in a circuit is called reactance.

The resistance of any material depends on four factors:

Nature of Material:-The material of which an object is made affects its resistance. The ease with which different materials give up their outer electrons is very important in determining resistance. 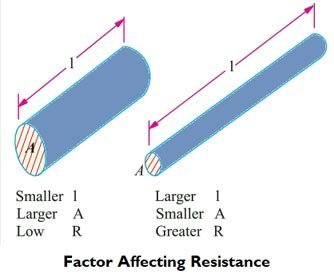 Effect of frequency in series Impedance 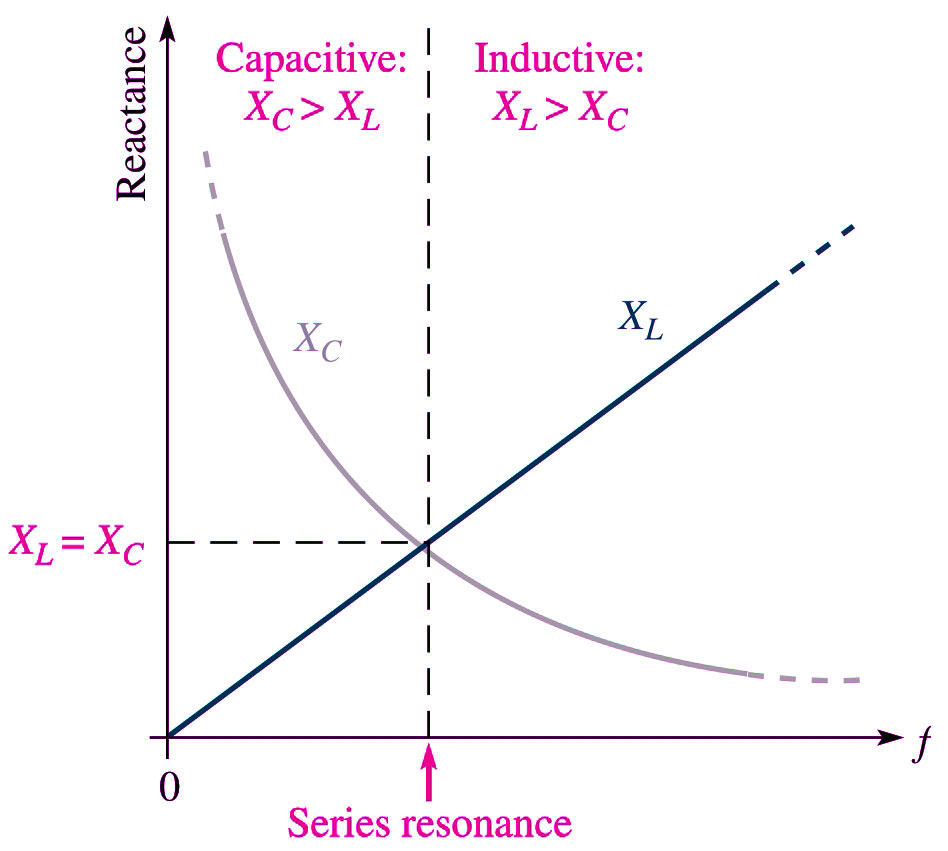 ⇒ The circuit changed from capacitive to inductive as the frequency increased.

Note that with increase in the frequency the impedance magnitude decreased at first become minimum, equal to the resistance (resonance frequency) and then began increasing again.

Note:- Resistance doesn’t take into account the frequency of the signal passing through it, because frequency doesn’t affect the resistance of non-reactive components.

Effect of frequency in parallel Impedance

Ideally, the impedance of a parallel resonant circuit is infinite. In practice, the impedance is maximum at the resonant frequency and decreases at lower and higher frequencies, as indicated by the curve. 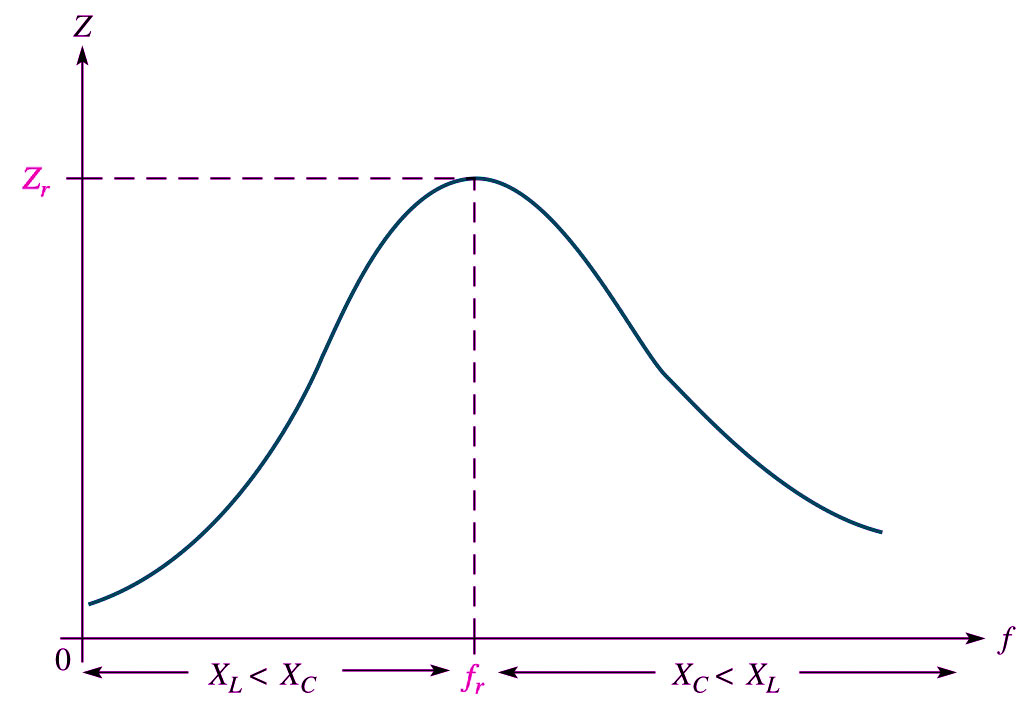 Note that with an increase in the frequency the impedance magnitude increases at first equal to the resistance (resonance frequency) and then began to decrease.

Application of Ohm’s law in resistance and impedance

Ohm’s law states that the current flowing through a resistance is directly proportional to the potential difference between its ends and inversely proportional to the value of the resistance, provided the temperature remains constant. By applying Ohm’s law, the current flowing through a resistor can be calculated by measuring the voltage drop across it, provided the value of the resistance is known.

The relationship between voltage, current, and impedance is defined by Ohm’s Law, which was derived by Ohm in the early nineteenth century. This law can be stated in three different but equivalent ways:

Complex numbers are rarely used when dealing with direct current, but commonly used with alternating current. So the resistance only consists of the real value such as 10 ohms.

The current that flows in one direction is called direct current (DC). In alternating current (AC), the flow of charge reverses directions alternately every fraction of a second (every half-cycle). The cycle repeats over and over again.

Either or both of the terms in the sum may be zero. if R is positive in the above Equation the component absorbs power. That is, power flows from the circuit into the component and doesn’t come back again. Conversely, if R is negative, the component delivers power to the rest of the circuit (in this case, to the voltage source that it is connected to).

On the other hand, the X part of the impedance can be either positive or negative. A positive +jX is termed inductive because an ideal inductor’s reactance is +jX, where X is a positive (real) number. A negative −jX is termed capacitive for a similar reason. These are straightforward consequences of the fact that for sinusoidal excitation in an ideal inductor, the current waveform lags the voltage waveform (90°), and in an ideal capacitor, the current leads the voltage by 90°.

In brief, an impedance contain both imaginary and real parrts while one that is purely real (no imaginary part) is called resistance or “resistive impedance. Also all reactances are impedances, but not vice versa.

Power consumed in Impedance and Resistance

Electric power is consumed each time a voltage causes the current to flow. Power generally appears in the form of heat, light, or motion. The basic unit of measurement for electric power is the watt.

In an electric circuit more power is taken from the supply than is fed back into it, since some power is dissipated by the resistance of the circuit, and therefore:

In an impedance circuit when the current increases in one direction in an AC circuit, charge accumulates on the capacitor and a voltage drop appears across it.

This energy storage is only momentary, however: When the current reverses direction, the charge leaves the capacitor plates and returns to the voltage source.

During one-half of each cycle the capacitor is being charged, and during the other half the charge is being returned to the voltage source. Therefore, the average power supplied by the source is zero. In other words, no power losses occur in a capacitor in an AC circuit.

Similarly, the source most do work against the back emf of an inductor that is carrying a current. When the current reaches its maximum value, the energy stored in the inductor.

When the current begins to decrease in the circuit, this stored energy is returned to the source as the inductor attempts to maintain the current in the circuit. In an a.c. circuit the power consumed is given by the product of the current and that part of the voltage which is in phase with the current. The average power delivered to a resistor in an RLC circuit is  given as

The average power delivered by the generator is converted to internal energy in the resistor. No power loss occurs in an ideal capacitor or inductor.

Power dissipation in Impedance and Resistance

In dc circuits the amount of power dissipated by the resistor is Real power or active power in the form of heat(I2R). This is because the dissipation of electrical energy in a resistor does not depend on the current’s direction. The power dissipation can be calculated by multiplying the voltage across a resistor by the current passing through it.

In ac circuits, there are three kinds of power: real, reactive, and apparent power. The kind of power that exists in purely resistive circuits is what is called real power or reactive power. In the impedance circuit, the electrical power is dissipated and stored.

Active power or Real Power:- It is the average of the instantaneous power over a time interval. It is the power consumed by the resistive loads in an electrical circuit. Real power is the power that is dissipated in the form of heat and is measured in watts

Reactive power is the power consumed in an ac circuit because of the expansion and collapse of magnetic (inductive) and electrostatic (capacitive) fields. Unlike true power, reactive power is not useful power because it is stored in the circuit itself. This power is stored by inductors, because they expand and collapse their magnetic fields in an attempt to keep the current constant, and by capacitors because they charge and discharge in an attempt to keep the voltage constant. 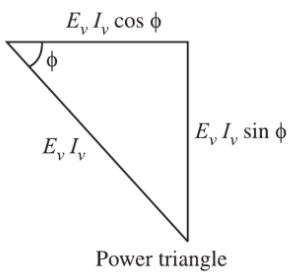 The reactive power is the rate of energy flow between the source and the reactive components of the load (i.e., inductances and capacitances). It represents a lossless interchange between the load and the source.

Resistance and reactance is a scalar quantity as it only has a magnitude. They can be added algebraically.

Impedance is a Vector quantity consisting of both a magnitude Z and direction φ.

However, in Impedance circuits, the simple sum of the real power and reactive power does not equal the apparent power.

This occurs because the phase relationship between the voltage across and the current through each component are different. Impedance is the vectorial sum of resistance and reactance.

The total apparent power is calculated using the Pythagoras theorem. It is equal to the square root of the real power squared plus the reactive power squared.

Phase angle of Impedance and resistance

The phase difference, measured in degrees between the current and voltage, is called the phase angle of the circuit and is denoted by the symbol φ, the lower-case Greek letter phi.

In an a.c. or d.c circuit containing resistance only, such as a heating circuit, the voltage and current are in phase, which means that they reach their peak and zero values together, as shown in Fig. Since the current and voltage are in the same phase, therefore, the phase angle of a purely resistive circuit is zero. 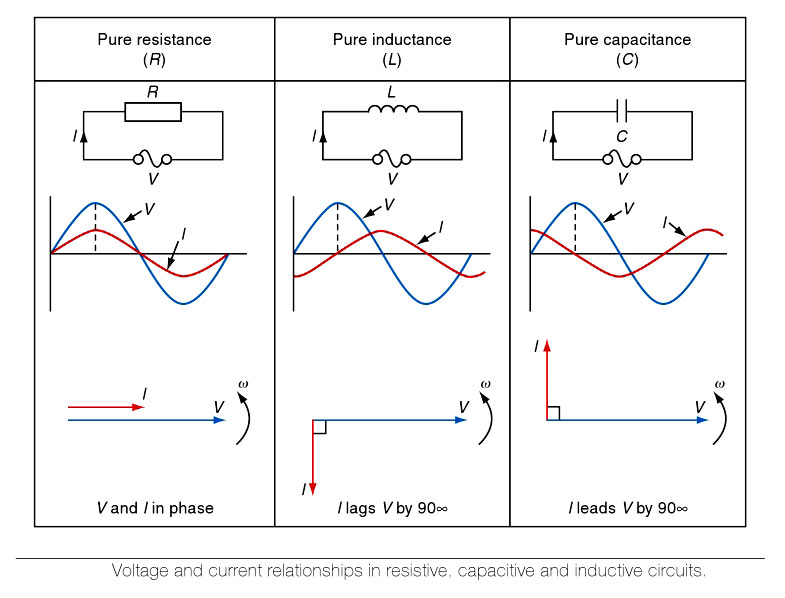 When circuits contain two or more separate elements, such as RL, RC or RLC, the phase angle between the total voltage and total current will be neither 0° nor 90° but will be determined by the relative values of resistance and reactance in the circuit. 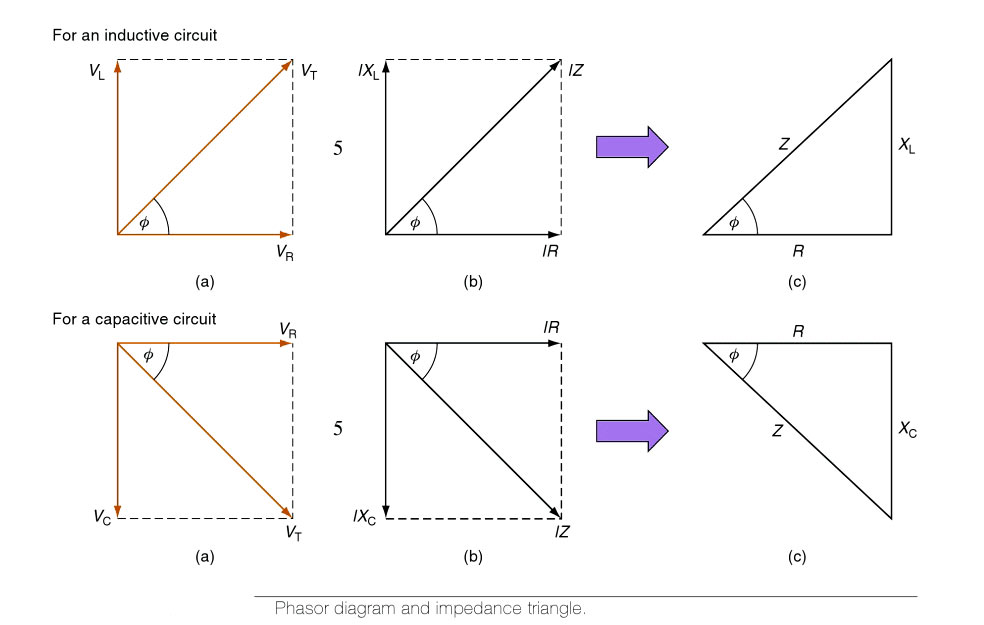 In impedance circuits, the reactance can be either inductive or capacitive. In the series RLC circuit the current is the same through both elements, but with different voltages appearing across the resistance and reactance. In the parallel circuit, the same voltage is applied to both elements, but different currents may flow in the two branches. The phase relationship between current and voltage for the whole circuit can be anything between zero and ±90°. The phase angle depends on the relative amounts of resistance and reactance in the circuit.

Power factor of Resistance and Impedance

Power factor (P.F) is defined as the cosine of the phase angle between the current and voltage.

The value of the power factor in a circuit, therefore, depends on the phase difference between the supply voltage and current.

In a purely resistive circuit, the phase angle is zero, so the power factor is one.

The ratio of the actual power of an alternating or pulsating current, as measured by a wattmeter to the apparent power, ae indicated by ammeter and voltmeter readings, The power factor of an inductor, capacitor, or insulator is an expression of their losses.

A power factor of an impedance circuit can only range between 0 and 1, but can be either leading or lagging.

It’s usual to make voltage the reference, so a lagging power factor means the current is lagging the voltage.

Resistance can be measured using an ohmmeter.  An ohmmeter causes an electric current to flow through the device being measured to determine the resistance of the device. The battery in the ohmmeter is the voltage source for the current that flows through the device being measured. Unlike a voltmeter or ammeter, an ohmmeter is only used when there is no other voltage source in the circuit. Ohmmeters work best when measuring the resistance of a component that is completely isolated from the rest of the electrical system.

The impedance can be measured by two such tools