Ques.1. The cyclic integral of (δQ − δW) for a process is

It was established by an English Scientist James Prescott Joule (1819-83) in 1843, that heat and mechanical energies are mutually convertible. He established through experiments that whenever a certain amount of work is done, a definite quantity of heat is produced. In other words, there is a numerical relation between the unit of work and a unit of heat. This relation is denoted by J (named after Joule) and it is known as Joule’s equivalent of the mechanical equivalent of heat.

Since the unit of work is joule or kilojoule and the unit of heat is also joule or kilojoule, therefore we can convert straightway heat units into mechanical units and vice versa. The relationship between heat and work is the basis of the First Law of Thermodynamics. It is one of the most fundamental laws of energy and is of special importance to engineers. It is also called the law of conservation of energy.

According to this law, when a closed or non-flow system undergoes a thermodynamic cycle, the net heat transfer is equal to the network transfer. Mathematically,

It follows from this equation that “if a system is taken through a cycle of processes so that it returns to the same state or condition from which it started, then the sum of heat and work will be zero.” It may be noted that δQ & δW are both path functions, but their difference ie. (δQ − δW) is a point function as the cyclic integral of (δQ − δW) is zero, i.e. ∮(δQ − δW) = 0.

The triple point of water is the one unique temperature and pressure pair at which ice, liquid water, and water vapor can coexist in contact with one another.

Ques.3. Which of the following law of thermodynamics is responsible for heat transfer?

According to the first statement of the first law, a closed system undergoing a thermodynamic cycle, the net heat transfer is equal to the total work done. But this does not specify the direction in which the heat and workflows. It also does not give any condition under which these transfers take place.

If you want to heat up a bowl of noodles for lunch, you don’t just let it sit on the table and expect the noodles to cook on their own. Even though the table may have several kilojoules of energy because it has a certain mass and a certain temperature, the quality of the energy isn’t sufficient to cook the noodles. The quality of the energy of the table, room, and bowl of soup is all the same, so no energy can be exchanged between them. If you let a bowl of hot noodles sit on the table, it cools off. Energy flows in a certain direction, just as water naturally flows downhill. In order to provide heating, you need a high-quality source of energy relative to the system receiving the energy. The heat source needs to have a higher temperature than the material receiving the heat.

When you perform a second law analysis on a system, you evaluate the quality of the energy used in the process as well as how much the quality degrades during the process. When you evaluate the quality of energy, you determine the amount of entropy generated in the process. Processes that generate large quantities of entropy in a process are inefficient. A second law analysis is helpful in looking at thermodynamic cycles and identifying where efficiency improvements are most beneficial.

STATEMENTS OF SECOND LAW OF THERMODYNAMICS

Following are the two common statements of the second law of thermodynamics:

“it is impossible to construct an engine which, while working in a cycle, produces no effect other than to extract heat from a single thermal reservoir and perform an equivalent work. “

This statement relates to a heat engine and it means that the complete conversion of heat energy into work is impossible. In other words, the *efficiency of a heat engine cannot be 100 percent.

“It is impossible to construct an engine which, while working in a cycle, produces no effect

So this law states that heat is always from high temperature to low temperature. Hence heat transfer is governed by the second law of thermodynamics.

Ques 4. Which one of the following mode of heat transfer would take place predominantly from boiler furnace to a water wall?

A furnace is the primary part of the boiler where the chemical energy available is converted into thermal energy by the combustion process.

An understanding of heat transfer is a fundamental requirement for a boiler operator. There are three ways that heat is transferred, conduction, radiation, and convection and all three mean occur in a boiler. The fundamentals of these heat transfer processes are individually simple, but the applications are complex because of the simultaneous occurrence of several modes of heat transfer, irregular shapes involved, dynamic conditions, and so on. That is why heat transfer is a not-so-exact science, as the variables are many and the situations dynamic Also, a very large body of data on the fundamental properties of materials is required.

The conduction method of heat transfer is mainly seen in solid objects. It happens when any ho material comes in contact with a cold material. When heat is transferred through conduction the substance itself does not move; rather, heat is transferred internally by vibrations of atoms and molecules. Electrons can also carry heat. Metals have many free electrons which mov^t around randomly. They can transfer heat from one part of the metal to another. So, metals art is generally a good conductor of heat.

Since the atoms are closer together, solids conduct heat better than liquids or gases This means that two solid materials in contact would transfer heat from one to the other better than a solid in contact with a  gas or a gas with a liquid.

Heat flow from flue gases to water/steam across the metal wall in a boiler, loss of furnace heat to the surrounding atmosphere through insulation, and heat loss from hot steam/water pipes through insulation are all examples of conduction. 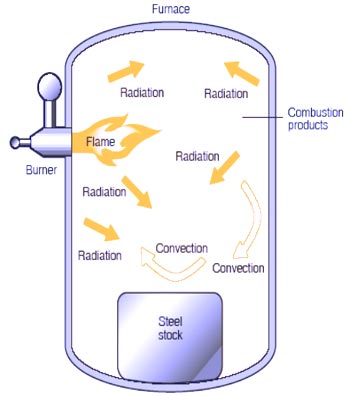 Molecules of a liquid and gas are not confined to a certain point. They change their position, In this case, heat energy is transported from one point to another by the movement of these molecules. This phenomenon of heat transfer is called convection.

Heat transfer in fluids is generally done through convection. The hotter part of the fluid is not as dense as the cooler part, so there is an upward buoyant force on the hotter fluid, making rise while the cooler and denser fluid sinks. The convection current is set up in the fluid.

Convection may take place naturally through the creation of convection current or by applying some external force. Convection in a boiler is due to the movement of hot gases over the stock surface.

Radiation is the transfer of heat by electromagnetic waves from the surface without the need of any medium. Heat flow in a boiler furnace is almost entirely by radiation. A unique property of radiant heat is that it requires no medium to carry it, so it can travel through a vacuum, as radiant heat from the sun travels through the vacuum of space. Radiation wave is generated from the flame, hot combustion product, and through the wall of the furnace.

Ques.5. Compression ratio in case of SI engine in the range of

Ques.6. Mean effective pressure of the Otto cycle is

Mean effective pressure (MEP): Defined as the work output of a cycle divided by the volume swept out by the piston. 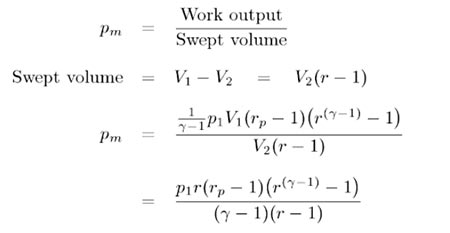 Ques.7. The choke is applied when the engine is

When an engine is cold, the intake and combustion chamber parts are cold. These cold parts make the vaporization of gasoline difficult and the engine hard to start. Many carburetors use a choke to help start a cold engine.

For the cold start phase of engine operation, a rich fuel mixture is needed because the engine metal is cold. When the engine is cold, the air-fuel mixture is also cold and won’t vaporize or combust readily. To compensate for this reluctance to burn, the amount of fuel in proportion to the amount of air must be increased. This is accomplished by the use of a cold start system or choke. Choke is designed to provide and control a richer-than-normal air-fuel mixture, which is necessary to quickly start a cold power equipment engine. Most carburetor cold-start mixtures are designed to operate at a ratio of approximately 10:1, that is, 10 parts of air to 1 part of fuel.

Ques.8. In which of the milling operation cutter is rotated in the same direction if travel of the workpiece

Milling is the process of machining using rotary cutters to remove material by advancing a cutter into a workpiece. A milling machine uses a multipoint tool to remove metal from a workpiece. The use of multipoint tools enables the machine to achieve^fast rates of metal removal and produce a good surface finish.

Milling processes may  be divided into two types:

Up milling is the conventional type of milling in which the cutter is rotated against the direction of travel of the workpiece. The thickness of the chip is small at the beginning and increases towards the end of the cut. The upward cutting force tends to lift the workplace from the table. Due to the nature of the cutting forces, the difficulty is experienced in feeding coolant at the beginning of the cut. In spite of the disadvantages, it is used so often because it is safer. It is particularly useful for milling castings containing particles of sand, and also for milling welded joints.

Down milling which is also called climb milling, is a process in which the cutter is rotated in the same direction as the direction of travel of the workpiece. The thickness of the chip and the cutting force is a maximum when the tooth begins cutting, and a minimum when the tooth stops cutting. Here, metal is removed when the cutter moves downwards. In this case, the clamping of the work is easier and the chips are disposed of more easily. Coolants can be fed into the cutting zones, and this reduces heat problems and gives a better surface finish. However, down milling cannot be used on machines having the backlash. The backlash causes the work to be drawn below the cutter at the beginning of the cut and leaves the work free when the cut is over. This results in vibration and damage to the workpiece.

Face milling produces a flat machined surface perpendicular to the axis of rotation of the cutter. The main cutting is done by the peripheral cutting teeth while the face cutting edges finish the work by removing a small quantity of metal.

Ques.9. Dry and compressed air is used as cutting fluid for machining

Grey cast iron has the properties listed below.

Ques.10. Spline-Holes are machined by

In the broaching process, a long tapered tool called the broach is passed across the stationary workpiece. There are a number of teeth on the broach, each of successively greater height. Linear cutting speed is provided to the broach.