Ques.1. Ampere is used to measure

An ampere is a unit to measure electric current flow.

Ques.2. The electric susceptibility of the vacuum is

Ques.3. A no-load test is performed on a transformer to determine

Open circuit test is also called a no-load test. The open-circuit test on a transformer is generally made on the low-voltage side as shown in Figure. It means that all the instruments are connected on the low-voltage side and a lower rated voltmeter can be used. There is no problem with the ammeter because the open-circuit current of the transformer is already low. The high-voltage side is kept open. In the transformer, the  Magnetizing current and core losses depend on the applied voltage and are practically unchanged by the load current. Therefore, to achieve these parameters, the rated voltage is applied to one of the winding. 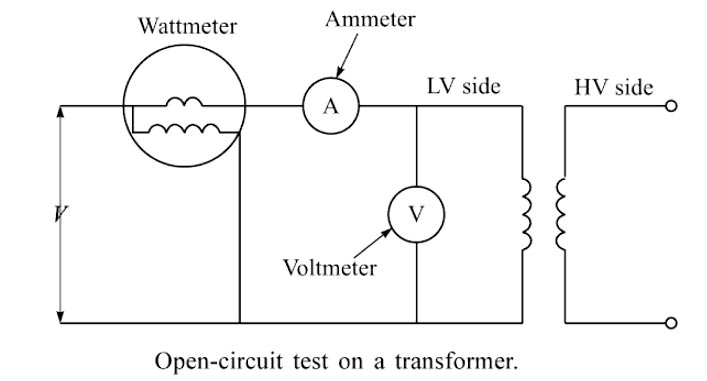 The fundamental principle of this test is that normal rated voltage is applied to one winding while the other is left the open circuit. The current flowing in the winding to which the supply is connected is the magnetizing current and this is recorded as part of the test records. Under OC conditions the transformer LV draws only magnetizing current, which is very small compared to the full load current so I2R loss is negligible compared with the core loss. To avoid unnecessarily high voltages in the test circuit during the core loss test, it is normal practice to connect the supply to the lower voltage winding of the transformer.

Ques.4. When two waves of same frequency and same amplitude traveling in opposite directions in a straight line overlap they give rise to:

When two progressive waves of the same wavelength and amplitude travel with the same speed along the same straight line in the opposite directions, these waves interfere to produce stationary waves or standing waves.

These waves are called stationary waves because there is no transfer of energy along the wave. The reason is simple. The particles at the nodes do not move at all. Therefore, energy cannot be transmitted across them.

Ques.5. The unit of luminous intensity is

Earlier “standard candle” was used to define the luminous intensity of a light source. However, the fundamental SI unit of luminous intensity is Candela. It is defined with respect to a black body that is a perfect emitter or absorber. The black body radiator is considered solidifying platinum at a temperature of 2046K (1773°C).

The candela is the base unit of luminous intensity in the International System of Units (SI) Candela (cd) is defined as luminous flux emitted per unit solid angle along normal to the surface of one-sixtieth (1/60) square centimeter area of a black body radiator (source of light) kept at a temperature of 2046K of solidifying platinum.

Ques.6. The temperature of a metal wire rises, when an electric current passes through it because

Answer.4.  Collision of conductor electrons with the atoms of the metal give them energy which appears as the heat

If an electrical conductor like a nichrome wire is connected to the terminals of a battery, we observe that, after sonic time, heat is produced through the wire. Thus the energy is transformed from an electrical form into heat form. This is known as the heating effect of electricity.

When a solid electrical conductor like a metallic wire is connected to the terminals of a battery, electric current, i.e., the flow of charge, takes place through the conductor by way of the motion of free electrons present in it from one end to the other end. While the free electrons of the wire are in motion through it, they collide with atoms or molecules of the substance giving rise to restriction to their free flow. This restriction to the flow of charges in a conductor is known as its ‘resistance’ or more precisely ‘electrical resistance’. Due to the collision of free electrons in the conductor with its atoms or molecules, their kinetic energy increases and this increase in the kinetic energy is exhibited in the form of heat. Thus, we can say the more the electrical resistance of a conductor, the more is the heat produced. It is found that the resistance of a conductor is directly proportional to its length and inversely proportional to its area of cross-section.

Ques.7. For energy sensitive and wide speed control, the preferred control method is

As explained earlier, armature voltage control produces speeds below the rated speeds, while field resistance control can be used to achieve speeds above the rated speeds. Some applications of de motors require a wide range of speed control, both above and below rated speeds. The Ward Leonard method provides such control. This method is 100 years old.

In this scheme, both field and armature control are integrated into one, as shown in Fig. In this method not only can we obtain the smooth wide variation of speed, but also, control can be in both directions. In this method, we require a separate motor-generator set to control the speed of the motor. In the diagram, M is the main motor whose speed is to be controlled. This motor is supplied by a separately excited dc generator G, The generator is driven by a three-phase induction motor with a constant speed Induction motor. The supply for the generator and motor is obtained from a small exciter, also driven by the induction motor. The speed of the motor is controlled by varying the generator G voltage and field current of the motor M. To control the speed of the D.C motor below rated speed, armature voltage is varied by keeping the excitation constant. While controlling the speed above, the rated speed field current of the dc motor is varied maintaining constant armature voltage. The reversal of the direction of rotation of the motor can be obtained by adjusting jockeys of the generator field rheostats. Field current is varied by connecting an appropriate rheostat in the field circuit. For obtaining a variable dc supply, a separately excited dc generator was used to supply the motor armature voltage.

To run this generator, a prime mover is required. A 3-phase induction motor is used as the prime mover which is supplied from a 3-phase supply. By controlling the field current of the generator, the generated output voltage can be varied. The potential divider connection uses two rheostats in parallel to facilitate the reversal of the generator field current. Although wide range smooth speed control is achieved, the cost involved is rather high, as we require one additional dc generator and a 3-phase induction motor of similar rating as that of the dc motor, whose speed is intended to be controlled. 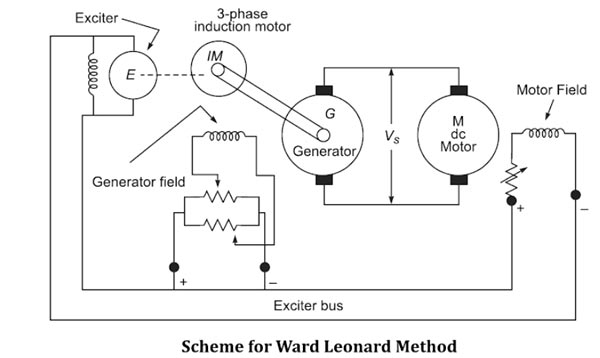 In the present day, variable dc supply can easily be obtained from A.C supply by using controlled rectifiers, thus avoiding the use of an additional induction motor and generator set to implement the Ward Leonard method. This method of speed control is very expensive for it requires a motor-generator set, and is relatively inefficient since several energy conversions are involved. However, this method provides smooth speed control over a wide range in both directions. Ward Leonard method is popular, where inherent dynamic regenerative breaking is possible; in applications such as rolling mills, elevators, excavators and special hoist motors.

Ques.8. Which of the following materials is used for the permanent magnets?

Properties of the material of a permanent magnet :

(1) It should have high retentivity so that it remains magnetized in the absence of the magnetizing field.

(2) It should have high saturation magnetization.

(3) It should have high coercivity so that it does not get demagnetized easily.

As steel and alnico have high coercivity, therefore, they are used for making permanent magnets. The metals in Alnico magnets are indicated by the pairs of letters making up the name, Aluminum, Nickel, and Cobalt.

The resistance to the moment of the magnetic domain walls is large. The causes for such nature are also due to the presence of impurities of non-magnetic materials or the lattice imperfections. The presence of defects increases the mechanical hardness to the material and increase the electrical resistivity and reduces eddy current losses. But if it gets magnetized, it will be permanently magnetized.

Hard magnetic materials are characterized by

Most widely used permanent magnetic materials are low alloy steels containing 0.658 to 1% carbon. Other materials are

Hard magnetic materials are used to prepare permanent magnets. Most of them are manufactured from alloys of steel with tungsten and chromium. The permanent magnets are used in magnetic separators, magnetic detectors, in speakers used in audio systems, and microphones. Hard magnets made of carbon steel find application in the making of magnets for toys and certain types of measuring meters because of its low cost.

Ques.9. Transport of charge carrier in the semiconductor is achieved through

There are two general types of movement of the electrons and holes, diffusion and drifting. Diffusion can be described by the following analogy. Nature does not support the concentration gradient to exist for a long time, i.e. the difference in concentrations of occupying particles between two adjacent regions.  Suppose that you have a rectangular tank that is filled with water and has a permeable membrane separating it into two equal parts. On one side of this membrane pour a solution of saltwater (sodium chloride) and on the other side pour a solution of potassium chloride. If you let the tank remain unmoved for a few hours and then test the liquid on both sides of the membrane you would find that each of the two solutions is distributed about equally throughout the tank on both sides of the membrane.

The other general type of movement of the electrons in a conductor or semiconductor is by drifting. This movement is caused by some force, e.g., a potential difference between two points in the semiconductor. Drifting is not a random movement like diffusion but is moving in a direction determined by the force causing this movement.

Ques.10. Which among the below-mentioned reasons is/are responsible for the occurrence of second breakdown phenomenon is power BJT?

Bipolar Junction Transistor (BJT) are known to be sensitive to second breakdown phenomena this instability is basically caused by the negative temperature coefficient of base-emitter voltage that decreases roughly at a rate of 2 mV/°C causing an increase of collector current. Power transistors can be destroyed when operating in the second breakdown mode. Many times as the collector voltage falls, a high rate of rise of the collector current is created causing a significant increase of power losses within the semiconductor device. What makes this operation mode dangerous is that the transistor power losses are not equally distributed within the device filaments, thus creating the so-called hot spot due to the collector current concentration at that point and this can be catastrophic for the transistor.

This power dissipation is localized in a highly concentrated region. So, in these hot spots, the increased current creates heat in a narrow region of BJT which causes resistance to decrease as the semiconductor has a negative temperature coefficient. Hence in that small area higher current will flow which will further increase in heat. This effect will eventually cause the transistor to fail.

The second breakdown phenomenon can be avoided using one of the following methods: