The steam engine is an external combustion engine in which steam is used as the working substance to convert the heat energy of steam into mechanical work. A steam engine is a reciprocating type of engine. In a steam engine, steam at high pressure and temperature is expanded to move the piston. The reciprocating motion of the piston is converted into rotary motion by a slider-crank mechanism.

Steam engines may be classified according to different criteria, as follows:

Since it is difficult to install a condenser on a locomotive, the steam engine runs non-condensing and, therefore, has a very low thermal efficiency of about 6-8 percent. it has strictly limited overload capacity.

Ques.2. The overall efficiency of the steam locomotive system is close to

The thermal efficiency of the locomotive is the work output, specified as drawbar horsepower or indicated horsepower.

Of the power developed in the cylinders, only 75% reached the drawbar, the rest being consumed in friction of moving parts and rolling resistance. It is easy to see how the total thermal efficiency of a steam locomotive was 4% to 8% at best. Typical coal consumption was 4.5 pounds per drawbar horsepower-hour, burning bituminous coal with a calorific value of ( 13,700,000 joules) per pound. A horsepower hour is 2,685,600 joules. Therefore the thermal efficiency of a typical steam locomotive was no more than 4% to 5%, calculated as (2,685,600/(4.5 x 13,700,000)

Ques.3. High-pressure locomotive work at the steam pressure of

Ques.4. In a steam locomotive, electric power is provided through 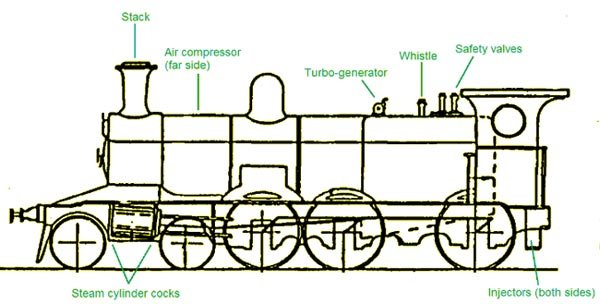 A steam-powered turbogenerator (sometimes called a “dynamo”) supplied electricity for the headlight and for the classification lights, illuminated number boxes, cab and gauge lights, and tender lights in a steam locomotive. The generator is usually on top of the boiler or on its shoulder.

Ques.5. Maximum horsepower of a steam locomotive is

Horsepower (hp) is a calculation of the rate at which work is performed; it measures an engine’s power output as a function of both torque and engine speed. James Watt (1736-1819), an engineer who helped make significant improvements to the steam engine, developed the formula to determine an engine’s hp. Watt wanted to compare the power of a steam engine to the number of horses required to perform the same amount of work. He based his calculation on observations of horses.

Ques.6. The advantage of electric traction over other methods is

Electric traction means locomotion In which the driving force is obtained from electric motors.

Ques.7. The range of horsepower for diesel locomotives is

Diesel traction is an autonomous system and depends on just two components: the engine and its transmission.

Diesel locomotives were introduced for the first time in our county in 1945 for shunting purposes on D.C generators and in 1956 for mainline services on M.G. sections. Indian Railways started using diesel locomotives extensively for mam line service since 1958.

Following four types of diesel-electric locomotives are employed in practice:

(i) The main-line diesel-electric locomotive has engines of output not exceeding 1600 kW and speeds 160 km/h.

(iii) The diesel-electric multiple unit stock of which each motor has an engine of 135 to 150 kW output and the train is capable of having speeds between 80 to 110 km/h.

(iv) The diesel-electric rail car has an engine of 75-450 kW output which may operate as a single car or with one or more trailer coaches.

Ques.8. The efficiency of diesel locomotives is nearly

Ques.9.  Overload capacity of diesel engines is usually restricted to

Diesel engine loads:-  To control an engine i.e to keep it running at the desired speed, either in accordance with or regardless of the changes in the load carried by the engine. The control of an engine depends upon two factors

(i) Its own performance characteristics

(ii) The type of load which it drives.

A total load of an engine consists of two parts:

(1) The internal load, or friction horsepower due to the friction, windage, and pumping losses within the engine itself and required by the attached engine-driven auxiliaries

(2) The external load, connected to the main drive shaft which takes the useful or brake horsepower output of the engine.

The indicated horsepower is equal to the total load, or the sum of the friction and the brake horsepower. The indicated horsepower necessary to balance this total load at any speed depends upon the pressures developed during combustion of the fuel and the resulting mean indicated pressure. The combustion process and the mean pressure developed by it depend primarily upon the quantity of fuel injected on the firing stroke if all other conditions remain substantially the same.

Most diesel fuel injection systems are designed so that the amount of fuel delivered at a fixed setting or position of the fuel control is approximately the same per injection, regardless of the engine speed. The total load at any speed, therefore, can be balanced by regulating the fuel control to the setting required to give the necessary mean indicated pressure. In other words, the setting of the fuel control regulates the speed of the diesel engine under any load.

The frictional forces or the internal load of an engine increase rapidly with an increase in the engine speed. This also is usually true of the external load, so that, in general, greater mean indicated pressures are required to balance the total load at higher speeds.

The diesel cycle is known as a “constant pressure cycle” which depends on high compression to ignite the fuel, no spark ignition involved. As the compression in the cylinder increases, the gases in the cylinder heat up and diesel fuel is injected starting the combustion. Since the fuel is sprayed in droplets, not all of it is burned at once. As the fuel atomizes between the drops it combusts until all the droplets are reduced in size and used up. This burning of fuel is hopefully complete by the time the piston is at the bottom of the stroke. This slower burning of diesel fuel gives a constant force on the piston, hence – “constant torque” as opposed to the explosive spark ignition of a gasoline(Otto cycle) engine. Therefore the horsepower of the diesel engine locomotive remained constant at all speeds.

Due to constant kW output prime mover, the overload capacity of diesel locomotive is low. Even an overload of 15% may stall the engine.

The system used for traction is a combination of both AC and DC, you must be knowing that the overhead power cable above the train is fed with AC supply (in India it’s 25kV) which is received by the transformer inside the railway engine which is stepped down, i.e the voltage level is reduced (this also causes the current level to increase and this increased current level is the driving force of the traction motor) and this power is fed to a device which converts AC power to DC power which is known as Rectifier. Now this DC supply is given to a given number of sets of DC Series & Shunt motors.

Direct current at 600-750 V is universally employed for tramways in urban areas and for many suburban railways while 1500-3000 V dc is used for mainline railways. The current collection is from the third rail (or conductor rail) up to 750 V, where large currents are involved, and from overhead wire for 1500 V and 3000 V, where small currents are involved.

It may be noted that for heavy suburban service, a low voltage dc system is undoubtedly superior to a 1-phase ac system due to the following reasons:

The only disadvantage of the dc system is the necessity of locating ac/dc conversion sub-stations at relatively short distances apart.