Ques.1.  The salient-pole construction for the field structure of an alternator is generally used for _______ machine.

The salient pole rotors are driven by low-speed water turbines or diesel engines. It is because the salient-pole type construction is difficult to build to withstand the stresses at high speeds. Because a salient pole rotor turns at low speed (50 to 300 r.p.m.) and because a frequency of 50 Hz is required, we must place a large number of poles on the rotor. The speed of an alternator is given as

Ques.2. The a.c. the armature winding of an alternator is

Alternators are connected primarily in the star to achieve the following motives:

Ques.4. The pitch factor for a full pitch winding of a synchronous machine is 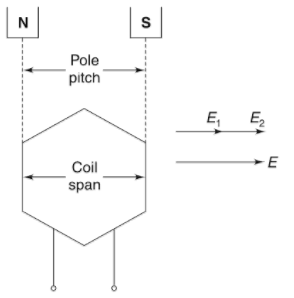 Ques.5. In the case of Zero Power factor leading load on the alternator, the effect of armature reaction is

Consider a purely capacitive load connected to the alternator having zero leading power factor. This means that armature current Iaph driven by Eph leads Eph by 90° which is the power factor angle φ. Induced e.m.f. Eph lags φf by 90° while Iaph and φa, are always in the same direction.

Ques.6. In the synchronous motor rotor, copper losses are met by

Stator: Stator is the armature winding. It consists of three-phase star or delta connected winding and excited by 3 phase A.C supply.

Rotor: Rotor is a field winding. The field winding is excited by the separate D.C supply through the slip ring.

The power received by the DC source is used to utilized only to meet copper losses of the field winding.

Ques.7. The phasor diagram of the synchronous machine connected to an infinite bus is shown in Figure. The machine is acting as a 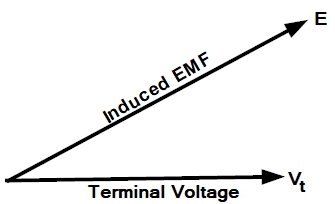 The voltage regulation of an alternator is defined as the change in its terminal voltage when the full load is removed, keeping field excitation and speed constant, divided by the rated terminal voltage.

So if Vph = Rated terminal voltage

Ques.8. In the case of the leading power factor, the terminal voltage of the alternator will

The voltage regulation of an alternator is defined as the change in its terminal voltage when the full load is removed, keeping field excitation and speed constant, divided by the rated terminal voltage. So if 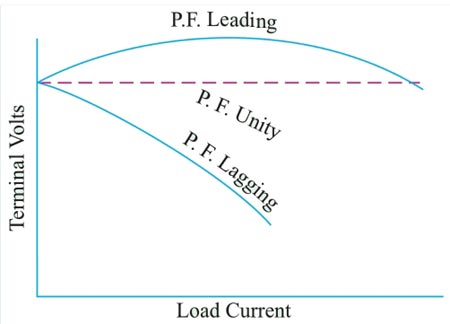 Ques.9. When any one-phase of a 3-phase synchronous motor is short-circuited, the motor

Answer.3. Will refuse to start

Failure of a synchronous motor to start is often due to faulty connections in the auxiliary apparatus. This should be carefully inspected for open circuits or poor connections. An open circuit in one phase of the motor itself or a short circuit will prevent the motor from starting.

Most synchronous motors are provided with an ammeter in each phase so that the last two causes can be determined from their indications: no current in one phase in case of an open circuit and excessive current in case of a short circuit. Either condition will usually be accompanied by a decided buzzing noise, and a short-circuited coil will often be quickly burned out. The effect of a short circuit is sometimes caused by two grounds on the machine.

Ques.10. The angular displacement between two interconnected stations is mainly due to

Answer.1. Armature reactance of both alternators 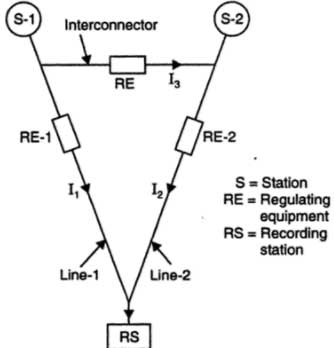