Ques.1. The radiant efficiency of the luminous source depends on

Answer.2. The temperature of the source

Radiant efficiency is defined as the ratio of energy radiated in the form of light, which produces the sensation of vision to the total energy radiated out by the luminous body.

Radiant Efficiency = Energy Radiated in the form of light/total energy radiated by the body.s. It is found that maximum radiant efficiency would occur at about 62000° C and even then the value of this maximum efficiency would be 20%

Ques.2. Lightwave travel with a velocity of

Carbon arcs operate by ionizing air molecules (which carry the current between the carbon electrodes) to incandescence.

To ignite the lamp, the rods are touched together, thus allowing a relatively low voltage to strike the arc. The rods are then slowly drawn apart, and electric current heats and maintains an arc across the gap. The tips of the carbon rods are heated and the carbon vaporizes. The carbon vapor in the arc is highly luminous, which is what produces the bright light. The rods are slowly burnt away in use, and the distance between them needs to be regularly adjusted in order to maintain the arc.

The carbon arc lamp was mainly used in the cinema projector. A carbon electrode projector produces the best possible light, a pure white with even brightness. But the rods are consumed in less than an hour (another reason for changeovers), and their burning produces carbon monoxide. The carbon-arc played a significant role until the introduction of the short-arc xenon discharge lamp in 1951.

Ques.4. The unit of solid angle is

When the normal (perpendicular) lines are drawn from the boundary of a portion on the surface of a sphere, Such that they meet at its center and form a cone, then the angle enclosed by the conical surface is called solid angle. 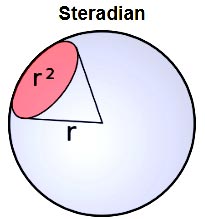 Ques.5. Candela is the unit of

Earlier “standard candle” was used to define the luminous intensity of a light source. However, the fundamental SI unit of luminous intensity is Candela. It is defined with respect to a black body that is a perfect emitter or absorber. The black body radiator is considered solidifying platinum at a temperature of 2046K (1773°C).

The candela is the base unit of luminous intensity in the International System of Units (SI) Candela (cd) is defined as luminous flux emitted per unit solid angle along normal to the surface of one-sixtieth (1/60) square centimeter area of a black body radiator (source of light) kept at a temperature of 2046K of solidifying platinum.

Ques.6. The unit of luminous flux is

The SI unit of luminous flux is the lumen (lm). One lumen is defined as the luminous flux of light produced by a light source that emits one candela of luminous intensity over a solid angle of one steradian.

Ques.7. The illumination is directly proportional to the cosine of the angle made by the normal to the illuminated surface with the direction of the incident flux. The above statement is associated with 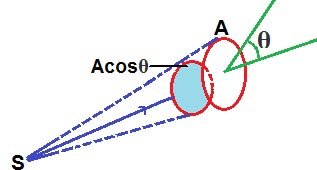 Ques.8. Which curve represents the life of the lamp?

Ques.9. Illumination level required for precision work is around

The intensity of illumination required on the surface is depending on the type of work being done. For each type of work, there is a range of brightness that causes minimum fatigue and gives maximum output intends of quality and quantity. Moving objects and the objects that are seen for a longer duration require more illumination than those for the stationary object and casual work.

Ques.10. Which of the following will need the highest level of illumination?

Proofreading is the process of reviewing the final draft of a piece of writing to ensure consistency and accuracy in grammar, spelling, punctuation, and formatting.