Ques.1. For a non-ideal single-phase transformer, which of the following is not true?

A practical single-phase two-winding transformer differs from the ideal transformer as follows:

The usual tests conducted on the transformer are

The open-circuit test is used to measure core losses and obtain the core loss resistance and magnetizing inductance which is helpful in finding shunt branch parameters of the equivalent circuit. 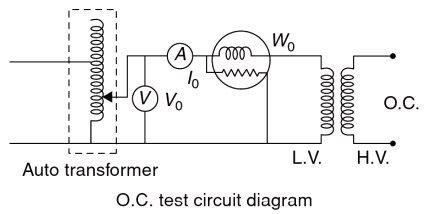 The current drawn by shunt parameters in a transformer is no-load current. Therefore the current that will flow in the circuit in the open circuit test is very low so the measurement of the quantities voltage, current, and power must be in the low voltage side so that the corresponding value will be readable in the instruments. And therefore, the open circuit test must be performed on the low voltage side. This means the high voltage side must be kept open.

Since the H.V. rated current is less, a short-circuit test is conducted preferably on H.V. side keeping L.V short-circuited. For conducting a short-circuit test only a small percentage (of the order 5% to 10%) of the rated voltage is sufficient to cause the rated current to flow through the windings. As the voltage is less, the core flux density is very much less compared to the normal value, so the iron loss which depends on flux density (voltage) can be neglected. The input is therefore equal to the total copper loss.

Ques.2. A triac based single-phase voltage regulator feeds an R-L load as shown in the figure. What is the range of triggering angle for which the output voltage Vo is not controllable? 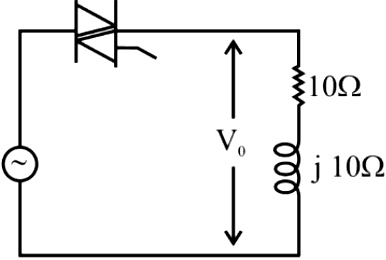 The firing angle for which the output voltage is uncontrollable is

Ques.3. In the given circuit with the shown ideal 5V DC source, the magnitude of the total current drawn from the source at a steady-state is

Under steady-state conditions, the inductor is replaced by short-circuited. Therefore, a 1 Ω resistor that is connected parallel to the nductor is neglected.

Hence total resistance of the circuit will be

Therefore current drawn by the 5 V source is

Ques.4. The impulse response of a causal linear time-invariant system is given as h(t). Now consider the following two statements and answer which of the following is true?

A system is said to be a linear time-invariant (LTI) system if it follows the superposition principle.

Superposition Principle: If y1 and y2 are the responses to the input sequences x1 and x2, respectively, then the input ax1 + bx2 produces the response ay1 + by2.

The superposition principle allows us to study the behavior of a linear system starting from test signals such as impulses or sinusoids and obtaining the responses to complicated signals by weighted sums of the basic responses. A linear system is said to be linear time-invariant (LTI), if a time shift in the input results in the same time shift in the output or, in other words if it does not change its behavior in time.

A system is said to be causal if the output of the system depends only on the input at the present time and/or in the past, but not the future value of the input. Thus, a causal system is non-anticipative, i.e. output cannot come before the input.

To have the given system to be causal, its impulse response must be zero for t < 0. The impulse occurs at t = 0 and there should not be output without input. Thus if h(t) is the system response to an impulse input then for causal system h(t) = 0 for t < 0. This is the required condition for the causal system.

Thus both the above condition is satisfied i.e

Ques.5. What is the total electric flux through the surface of a sphere that has a radius of 1 m and carries a charge of 1µC at its center? coulomb constant is given by Ke = 1/4πεο = 8.99 × 109 where εο is the permittivity of free space.

The electric flux through the surface of the sphere

Ques.6. A DC-DC buck-boost converter is operated with the continuous current mode. If the input voltage is 50 V and the duty cycle of the switch is 0.6, the output DC voltage is

The output voltage equation of the buck-boost converter is

Ques.8. A three-winding transformer is connected to an AC source with 50V RMS as shown in the following figure. Voltages induced in the secondary windings are 2V RMS and 8V RMS. The output RMS voltage Vo is 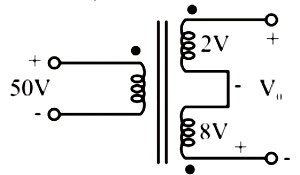 Applying KVL on the secondary side of the transformer in the given figure.

Ques.9. The op-amp in the circuit shown in the figure works in linear mode. The output voltage Vo is 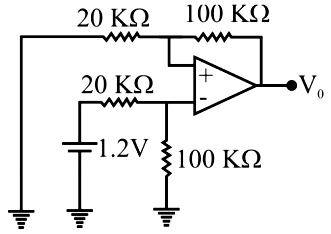 According to the virtual ground concept for inverting amplifier

Ques.10. For operation in the normal active mode for a BJT, which of the following conditions is true?

The BJT transistor has two junctions, namely emitter-base (EB) and collector–base (CB), and each of these junctions can be either forward or reverse biased, we can have four different modes of operation for the bipolar transistor. They are: