Ques 1. The value of current I flowing in the 1Ω resistor in the circuit shown in the figure below will be

Ques 2. In the figure shown below, if we connect a source of 2V, with internal resistance of 1Ω at AA’ with positive terminal at A, then the current through R is

Connect a source of 2V, with internal resistance of 1Ω at AA’ 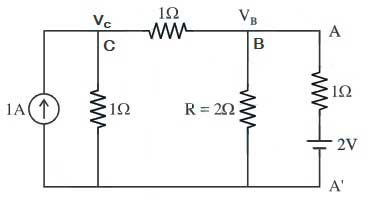 Applying Nodal analysis at C and B 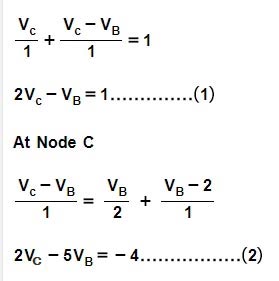 Ohm’s law of constant proportionality state that for a given conductor the ratio of voltage to current is constant i.e if the temperature, area, the length did not change the resulting current is directly proportional to the variation in the applied voltage. Hence the graph between voltage and current is linear.
R(constant) = V/I 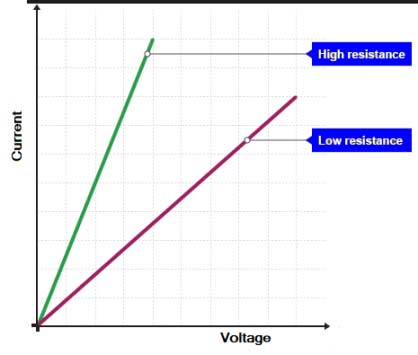 ★Ohms law does not apply to all material it only applied to “linear” or “Ohmic Resistor”.

Ques 4. The specific resistance of a conductor depends upon

where ρ is a constant depending on the nature of the material of the conductor and is known as its specific resistance or resistivity.

Ques 5. The superposition theorem is essentially based on the concept of

In any Linear and bilateral network consisting of linear and bilateral energy sources (e.g. generators), the current flowing at any point in the network is the algebraic sum of the currents those flow with each source were considered separately, with all the remaining sources replaced at a time by their internal impedances.

The theorem is hence based on the linearity property and Ohm‘s law. The fundamental concept is that in linear impedance, for an increase in voltage across it, the current through it increases which is independent of the magnitude of the original current ﬂowing through it.

For the same load

Ques 7. The angle between induced emf and terminal voltage on no-load for a single phase alternator is

The generated voltage of the alternator is

So at no load, the angle between induced emf and terminal voltage is 0°

Ques 8. A salient pole synchronous generator connected to an infinite bus power will deliver maximum power at a power angle of

Ques 9. Starting torque of the synchronous motor is

The starting torque of the synchronous motor is zero. 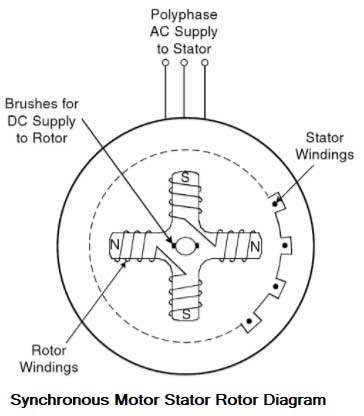 Ques 10. The power factor at which the transformer operates