Ques 1. The emf induced per phase in a three-phase star connected synchronous generator having the following data

E.M.F equation of an alternator is given as

Copper loss is proportional to the square of load current. At half load, load current becomes half as voltage remains same, so the copper loss will become (1/2)2 i.e 1/4 times of full load copper loss.

Ques 3. An autotransformer used with sodium vapour lamp should have high

A sodium vapor lamp is also called the cold-cathode low-pressure lamp which gives high luminous output about three times higher than the other lamp.

For starting discharge through the lamp, it is essential that the striking voltage should be higher than the normal working voltage of the lamp. This high voltage is taken from a high reactance transformer or auto-transformer which has poor voltage regulation. Thus when discharge in the lamp takes place, the lamp current increase due to the decrease in the resistance of the gas in the tube and output voltages of the auto-transformer fall. The lamp then continues to operate normally.

Ques 4. In an auto-transformer, the number of turns in primary winding is 210 and in the secondary winding is 140. If the input current is 60 A, the current in output and in common winding are respectively.

Auto-transformer ratio is given as

Ques 5. A 3-phase transformer has its primary connected in delta and secondary in star. The secondary to primary turns ratio per phase is 6. For a primary voltage of 200 V, the secondary voltage would be

Transformer ratio is given by

For star connection line voltage is

Ques 6. A resistance and another circuit element are connected in series across a dc voltage V. The voltage and zero after time. The other element is pure

Why inductor behaves as short circuit for DC voltage?

An inductor has a reactance equivalent XL = 2πfL. Since a DC supply will have frequency = 0, the reactance is 0 and the inductor would be short. 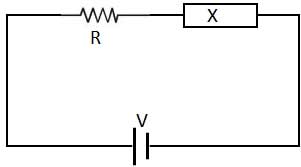 Imagine a circuit of three elements in series – an input voltage source, inductor, and resistive load. The input source has been producing some constant (DC) voltage; If an inductor is connected with a DC source, it will not act as an inductor but acts like a simple resistor. The current through it will depend on the resistance of the inductor. Now increase the input voltage to a higher value.

The inductor immediately converts the voltage change to an equivalent “antivoltage” and applies it contrary to the input voltage change, the voltage “produced” by the inductor “jumps” with a magnitude equal to the input voltage change. Thus we have two voltage sources (an “original” and “cloned”:) contrary connected in series and neutralizing each other; as a result, the total (effective) voltage and accordingly the current do not change. After that, the current will increase exponentially (1 – e-t) and reach a constant value. The current will be maximum and the inductor will behave like a short circuit.

Ques 7. For RLC series resonance the current is

Thus, at the resonant frequency, the net reactance is zero because X1=X2. The circuit impedance Z becomes minimum and is equal to the resistance R. “Since the impedance is minimum, the current will be maximum”.

Ques 8. A series RLC circuit resonance at 1 MHZ. At frequency 1.1 MHZ the circuit impedance will be

For Series RLC circuit if the frequency is greater than the resonance frequency than the circuit behaves as an inductive circuit.

Ques 9. The equivalent resistance between terminal X and Y of the network shown is

As the given circuit is Wheatstone bridge balance circuit

Therefore according to balanced equation of Wheatstone bridge

Ques 10. Application of Thevenin’s theorem in a circuit results in 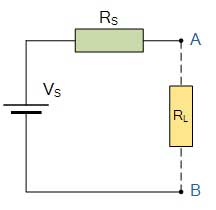