Ques 2. The power factor at which the transformer operates is  (SSC 2009)

Answer.4. Depends upon the power factor of the load

Answer.3. Is more than core loss

η at full load of the transformer

⇒ Efficiency η at half load 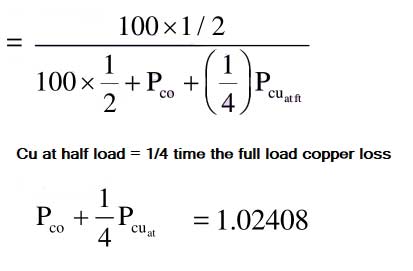 Ques.4. Which of the following will improve the mutual coupling between primary and secondary circuit? (SSC 2009)

Most transformers are designed so that as much flux due to the coils is confined to the magnetic circuit as possible, and so that primary and secondary are closely coupled. The aim is to minimize flux leakage to achieve maximum efficiency. However, some transformers are deliberately designed to have a controlled amount of flux leakage because it can provide current limiting in the secondary.

Leakage transformers are used for arc welding and high-voltage discharge lamps (neon lights and cold cathode fluorescent lamps, which are series-connected up to 7.5 kV AC). They act as both voltage transformer and magnetic ballast. Other applications are short-circuit-proof extra-low voltage transformers for toys or doorbell installations.

Buchholz relay can be used only in the oil-immersed transformer having a conservative tank. Due to economic considerations, Buchholz relay is not provided for the transformers having below 500 KVA.

Ques.7.  A transformer is working at its full load and its efficiency is also maximum. The iron loss is 1000 watts. Then, it copper loss at half of the full load will be (SSC 2010)

The copper loss at the half load will be one-fourth times of full load copper loss. It is given by

Ques.8. Distribution transformers are designed to have maximum efficiency nearly at (SSC 2010)

Distribution transformers are used for lower voltage distribution networks as a means to end-user connectivity. (11kV, 6.6 kV, 3.3 kV, 440V, 230V) and are generally rated less than 200 MVA. Distribution transformers depend on the typical load cycle for which it has to supply power. Definitely Core the design will be done to take care of peak load and as well as all-day-efficiency. It is a bargain between these two points.

The distribution transformer is used for the distribution of electrical energy at low voltage as less than 33KV in industrial purpose and 440v -220v in domestic purpose. It works at low efficiency at 50-70%(due to variation in load), small size, easy in installation, having low magnetic losses & it is not always fully loaded.

Ques.9. A 2 kVA transformer has an iron loss of 150 W and full load copper loss of 250 W. The maximum efficiency of the transformer will occur when the total loss is (SSC 2010)

When variable loss becomes equal to the constant loss, efficiency is maximum.

Since copper loss is a variable loss therefore

Thus at maximum efficiency of this transformer total loss

Voltage transformers (VT), also called potential transformers (PT), are a parallel-connected type of instrument transformer. They are used in the electrical power system for stepping down the system voltage to a safe value which can be fed to low ratings meters and relays.