Ques.31. Which of the following materials when used as the viewing surface of a CRO gives a reddish glow? (SSC-2018 Set-4)

The actual conversion of electrical to light energy takes place on the display screen when electrons strike a material known as a phosphor. A phosphor is a chemical that glows when exposed to electrical energy.

The selection of phosphors to be used in a cathode ray tube is very important. Many different phosphors are known, and each has special characteristics. For example, the phosphor known as yttrium oxide gives off a red glow when struck by electrons, and yttrium silicate gives off a purplish-blue glow.

Answer.3. It increases the range of AC ammeter 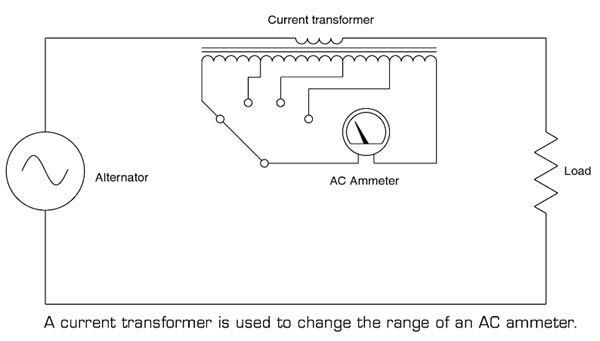 The basic principle of the induction-type energy meter is electromagnetic induction. When AC flows through two suitably located coils (current coil and potential coil), they produce the rotating magnetic field that is cut by the metallic disc suspended between the coils, and thus, an emf is induced in the disc that circulates eddy currents in it. By the interaction of the rotating magnetic field and eddy currents, electromagnetic torque is developed that causes the disc to rotate. This is the same principle that is applied in single-phase induction motors. 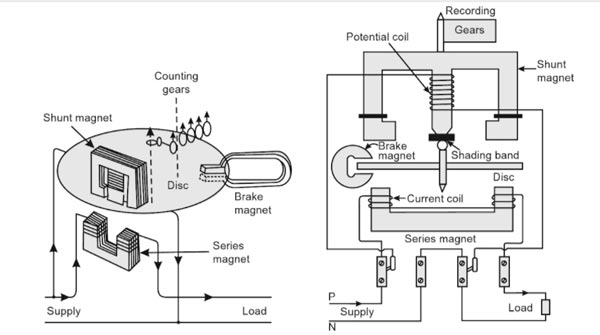 Shading bands made of copper are provided on the central limb of the shunt magnet. Shading bands, as will be described later, are used to bring the flux produced by a shunt magnet exactly in quadrature with the applied voltage.

The moving system consists of a light aluminum disc mounted on a spindle. The disc is placed in the space between the series and shunt magnets. The disc is so positioned that it intersects the flux produced by both the magnets. The deflecting torque on the disc is produced by an interaction between these fluxes and the eddy current they induce in the disc. In energy meters, there is no control spring as such, so that there is the continuous rotation of the disc.

When disc rotates in the air gap, eddy currents are induced in the disc which opposes the cause producing them i.e. relative motion of disc with respect to the magnet. This eddy current, while interacting with the brake magnet flux, produces a retarding or braking torque. This braking torque is proportional to the speed of the rotating disc. When the braking torque becomes equal to the operating torque, the disc rotates at a steady speed.

The function of a registering or counting system is to continuously record a numerical value that is proportional to the number of revolutions made by the rotating system.

Wien’s bridge is primarily used for the determination of an unknown frequency. However, it can be used for various other applications including capacitance measurement, in harmonic distortion analyzers, where it is used as the notch filter. and also in audio and HF oscillators.

Wien’s bridge is frequency sensitive. Thus, unless the supply voltage is purely sinusoidal, achieving balance may be troublesome, since harmonics may disturb the balance condition. Use of filters with the null detector in such cases may solve the problem.

The inductance of an inductive coil is generally measured by the usual inductive circuit like Maxwell-Wein Bridge, Hay Bridge, Anderson’s bridge, Owen’s Bridge

The Anderson’s bridge gives the accurate measurement of the self-inductance of the circuit.

De-Sauty’s Bridge is used to measure the value of unknown capacitance in terms of standard capacitance.

The Voltmeter is connected in parallel with the Load

A voltmeter is used to determine the voltage across 2 points of resistance in a circuit. For this purpose, it obviously has to be in contact with both the points across its 2 ends to give the reading for the potential difference of the 2 points. If it is connected in series, it will be in contact with only 1 point at a time. However, voltmeters have very high resistance so that they pull minimum current possible towards them, thus preventing a wrong current reading. Now if it is connected in series then no current will be there in the circuit due to its high resistance. Hence it is connected in parallel to the load across which the potential difference is to be measured. 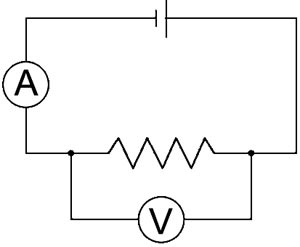 An ammeter is connected in series with the load

To measure current, you want most of the current to pass through it. Hence ammeter is connected in series with the low resistance

An ammeter measures the value of current flowing in the circuit, so current should flow inside ammeter to give proper result. it acts like a closed switch so it indicates the current. And it has very low resistance to ensure the correct measurement of current in the circuit. If it is connected in parallel across any load then all current in the circuit will choose the lower resistive path (i.e ammeter) to cause its circuit to be damaged. Hence it is used in series.

The deflection sensitivity of a magnetic deflection cathode ray tube is defined as the amount of spot deflection on the screen when the potential of 1 volt is applied to the deflection plate.

In most CROs, the deflection sensitivity is expressed as the ratio of input voltage to the length of the trace.

Deflection sensitivity of the CRO is given as

Ques.37. The current required for full-scale deflection of a voltmeter is 10 mA. Find the sensitivity (in ohms/V) of the voltmeter. (SSC-2018 Set-5)

Instruments that measure AC waveforms generally have some maximum frequency above which the measurement accuracy is degraded. This frequency is the bandwidth of the instrument and is usually defined as the frequency at which the instrument’s response has decreased by 3 dB.

Ideally, waveforms such as square waves and pulses change the voltage level instantaneously. In reality, waveforms tales some time to make an abrupt change, depending on the bandwidth of the system and other circuit parameters. The amount of time it takes for a waveform to transition from one voltage to another is called the rise time. (The rise time is normally measured at the 10% and 90% levels of the transition.) The bandwidth of a measuring instrument will limit the measured rise time of a pulse or square wave. For a typical instrument, the relationship between rise time and bandwidth is given by:

Ques.39. Which of the following is NOT the correct representation of the balanced condition of the AC bridges? (SSC-2018 Set-5)

A.C. bridges are electrical networks, based upon an extension of the Wheatstone* bridge principle, used for the determination of an unknown impedance by comparison with known impedances and for the determination of frequency. In general, they contain four impedance arms an A.C power supply and a balanced detector which is sensitive to alternating currents. It is more difficult to achieve balance in an a.c. bridge than in a d.c. bridge because both the magnitude and the phase angle of impedances are related to the balance condition. Balance equations are derived by using complex numbers. A.c. bridges provide precise methods of measurement of inductance and capacitance, as well as resistance.

The balanced condition of A.C bridges 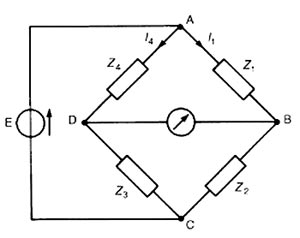 Dividing equation 1 and 2 we get

Let θ1, θ2, θ3, θ4, be the phase angles. The product of the impedances must be carried out in the polar form where magnitudes get multiplied and phase angles get added.