For an instrument, perfect reproducibility means that the instrument has no drift. This means that for a given input, the measured values are constant and do not vary with time.

Ques 42. Transducers maybe not be called as

A device that converts a physical quantity into a proportional electrical signal is called a transducer.

The electrical signal produced may be a voltage, current, or frequency. A transducer uses many effects to produce such conversion. The process of transforming the signal from one form to other is called transduction.

Ques 43. Current passing through an inductor is 4 A. Energy stored in the inductor of inductance 0.2 Henry will be

Energy stored in the Inductor is given by

Ques 44. Loudness is expressed in

The loudness of sound is measured in units called decibels (dB). A decibel unit expresses the relative intensity of sounds on a scale from zero for the average least perceptible sound to about 100 dB, which is near the level most people find uncomfortably loud.

Ques 45. At much lower temperatures semiconductors behave as

The resistance of semiconductor, Insulator, and Electrolyte(silicon, Glass, Varnish, etc) decrease with an increase in temperature. At zero temperature or very low temperature, the semiconductor behaves as a perfect insulator.

As the temperature increases, some of the electrons acquire energy and become free for conduction. Hence, conductivity increase and resistance decrease with an increase in temperature.

Ques 47. Insulation resistance of a cable can be measured by which of the following?

Methods for the measurement of high resistance

The various methods employed for the measurement of high resistance are: 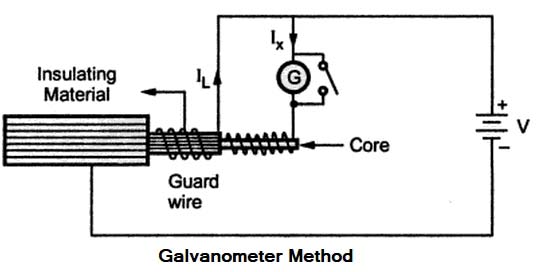 In this method, a high resistance (more than 1000 Q.) and very sensitive moving coil galvanometer is connected in series with the resistance to be measured along with supply voltage. By this method, insulation resistance can be obtained with respect to the deflection of the galvanometer. 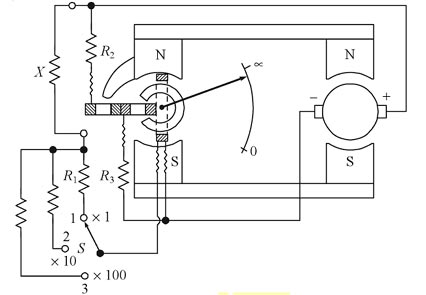 When the current flows from the generator, through the pressure coil the coil tends to set itself at right angles to the field of the permanent magnet.

When the test terminals are open, corresponding to infinite resistance, no current flows through the deflection coil. Thus the pressure coil governs the motion of the moving element making it move to its extreme anticlockwise position. The pointer comes to rest at the infinity end of the scale.

When the test terminals are short-circuited i.e. corresponding to zero resistance, the current from the generator flowing through the current coil is large enough to produce sufficient torque to overcome the counter-clockwise torque of the pressure coil. due to this, the pointer moves over a scale showing zero resistance.

When the high resistance to be tested is connected between terminals T1 and T2the opposing torques of the coils balance each other so that pointer attains a stationary position at some intermediate point on the scale. The scale is calibrated in megaohms so that the resistance is directly indicated by the pointer.

Ques 48.  If there are no copper losses in the rotor, then

When there is no copper loss than from equation 1

Hence if there are no copper losses in the rotor, then rotor output will become equal to rotor input and the rotor will run at synchronous speed.

An electrical drive is an industrial system that performs the conversion of electrical energy into mechanical energy or vice versa for running and controlling various processes. Very low power drives are generally fed from single-phase sources. The rest of the drives are powered by a three-phase source.

Ques 50. Pollution due to Tidal Energy generation is usually