Ques 1. The type of electrode used in the seam welding is

Welding electrode. A component of the welding circuit through v hick current is conducted and that terminates at the arc, molten conductive slag, or base metal. See also arc welding

Electrode (resistance welding)—that part or parts of a machine through which the welding current and in most cases, pressure, are applied directly to the work. The electrode may be in the form of a rotating wheel, bar, cylinder, plate, clamp. 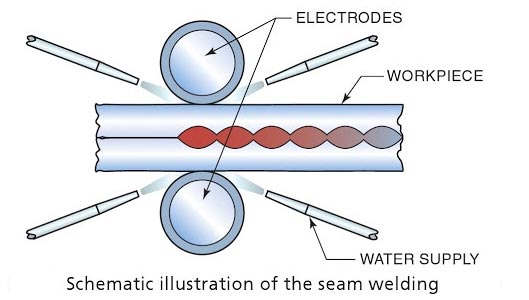 Welding is done either with the roller electrodes in motion or while they are stopped for an instant. If the continuous motion is used, the rate of welding usually varies between 1 ft and 5 ft (30 cm to 152 cm) per minute. The greatest welding speed is obtained on the thinnest materials. An indexing mechanism can be used when the wheels are to be stopped for each weld.

Electric timing equipment is used when it is necessary to provide the precise control required for highest quality welds. Spot welds can be positioned at almost any interval desired by simply adjusting the timing and rate of electrode motion.

It is possible to change the welding current and electrode pressure to control the surface condition and width of the weld. The seam width should be about two times the thickness of the sheet plus 1/16 inch (2 mm).

The figure illustrates the type of seams used in most seam welding processes. The lap seam is the most common of these seams. The tops and bottoms of containers are usually fastened together with a Hanged seam. For a metal thickness of 1/16 inch (2 mm), the mash seam is often used. The electrode face should be wide enough to cover the overlap by approximately one and a half times the thickness of the sheet.

This process is similar to RSEW in some ways. TO major differences are that the welding current is supplied as supplied frequency, 200 to 500 kHz as opposed to DC 50-cycle AC. The high-frequency power provides very localized heating. This heating is a result of the resistant to the current induced in the metal and not to the resistance between parts. As a consequence of this localizes heating, pipe and tubing can be welded with little loss of power flowing around the back side of the joint.

High-Frequency Resistance Seam Welding is used in the production of welded pipe tubing, and structural shapes. It works very well for tip fabrication of l-beams, H-beams, channels, and so on. The welded structural shapes are lighter and stronger than the roll-formed counterparts.

Ques 2. Calculate the length of the wire required for an electric radiator to dissipate 1 kW when connected to a 230 V supply, if the coils of the radiator are made of wire 0.5 mm in diameter having the resistivity of 60 μΩ.cm

As we know that power P is given by

Ques 3. In the case of an electromechanical generator, the frequency is

At locations with synchronous generation attached, the inherent physics of the synchronous machine dictate that the electrical frequency of the generator voltage and mechanical rotational speed of the generator are locked in fixed proportion to each other, so that variation of frequency directly reflects deviations in rotational speed away from the desired steady state.

Ques 4. Which of the option is INCORRECT for the following statement.

Three resistances are said to be in parallel when

The resistance can be combined in two ways:

When two or more resistance is connected ends to end consecutively, they are said to be connected in series.

Resistances are said to be connected in series when there exists only one path for the flow of current and the current through each resistor is equal.

(1). The sum of the voltage drops across the individual circuit components is equal to the applied voltage. (Voltage drops add.)

(2). The total current flow through each resistance or load. The mathematical formula is as follows:

When two or more resistances are connected between the same two points they are said to be connected in parallel. The below figure shows three resistances R1, R2, and R3 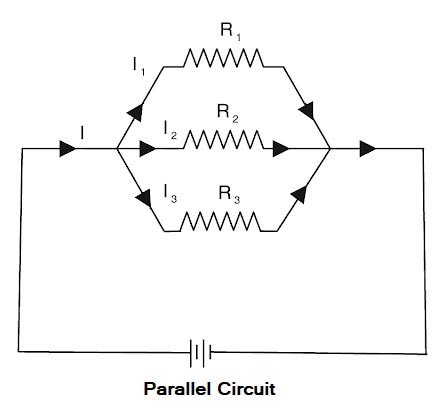 Two or more resistors are said to be connected in parallel when one end of each resistor is connected to the positive pole and the other end to the negative pole of the common battery or voltage source.

Characteristics of a parallel circuit

(i) The potential drop across each resistance is the same.

(iii) The current is divided between the different loads according to their individual resistances, and the total current is equal to the sum of the currents in each branch. The mathematical formula is as follows:

Ques 5. For zero power factor leading loads, the effect of armature reaction in an alternator is

So the effect of the armature flux on the main flux affects its value and the distribution is called armature reaction.

Consider a purely resistive load connected to the alternator, having a unity power factor. As induced e.m.f Eph drives a current Iph and load power factor is unity, Ephand Iph is in phase with each other.

Ques 6. Synchronous Motor for the rotary Kilns Run at

Synchronous motors have the following advantages as compared to 3-phase induction motors :

Ques 7. In a balanced 3-phase system, the zero-sequence current is

A balanced three-phase system voltage supply consists of three individual sinusoidal voltages that are all equal in magnitude and frequency but are out-of-phase with each other by exactly 120o electrical degrees. The phase voltages are all equal in magnitude but only differ in their phase angle. The three windings of the coils are connected together at points, a1, b1 and c1

In a 3-Phase system, the presence of negative or zero sequence currents introduces un-symmetry and is indicative of an abnormal condition of the circuit in which these components are found.

In the case of unbalanced 3 phase faults, we represent it as the sum of 3 balanced phasors (so-called sequence components).

Positive sequence component: It indicates three equal phasors which are 120 degrees apart and has the same phase sequence as the original signal. In our case, this will be the source/supply current/voltage. If our phase sequence is RYB then it will be in the RYB sequence. It specifies that the current is flowing through the source to load.

Negative sequence component: It indicates three equal phasors which are 120 degrees apart and has opposite phase sequence as the original signal. If supply is RYB then these will be in RBY sequence. It specifies that current is flowing from load to source.

Zero sequence component:  it represents three equal and parallel phasors with zero degrees phase displacement. It specifies that current is flowing from source to ground.

Ques 8. The series field of the long shunt compound generator is excited by

As we know that the terminal voltage of the DC generator decreases as the load on the generator is increased. The compound generator was developed to eliminate this problem. In some applications this drop is admissible but in the case of lighting loads, it presents a serious problem. For example, in ships, the same generator is used to supply the power to DC machinery as well as to the lighting circuits.

In a compound wound generator, there are two sets of field windings on each pole one is in series and the other is in parallel with the armature.

Short-shunt compound generator in which only shunt field winding is connected in parallel with the armature, as shown in Fig. In short shunt connection series, field carries no current at no-load and thus its open-circuit characteristics are the same as that of a shunt generator.

The current relations of the short-shunt connection of a d.c. compound generator is

Ques 9. According to double-revolving field theory, a sinusoidal alternating flux can be looked upon as the combination of two revolving fluxes

The working principle of an ac machine is primarily “one field following another field”. In the case of a multiphase induction motor, there will be a virtual rotating magnetic field. But considering the case of a single-phase induction motor, it’s only a pulsating field that is produced and not a rotating one. This can also be explained on the basis of ‘DOUBLE REVOLVING FIELD THEORY‘, which is based on the Ferraris Principle

As per Ferrari’s principle, the alternating magnetic field produced by the stator can be split into two rotating magnetic fields of half the magnitude and rotating at synchronous speed in opposite directions. When the alternating supply is fed to the stator winding, an alternating flux is developed This flux rotates and cuts the rotor conductors. Due to this, an EMF is induced. As the rotor circuit is closed the current flows through the rotor conductor. This rotor current will cause rotor flux and at any instant, its magnitude is given by,

An emf is induced in the rotor circuit due to each rotating field. If the polarity of the induced emf in the rotor due to φf  is taken as positive then emf induced in the rotor due to φb is negative (i.e. in phase opposition). As, at standstill, the slip in either direction is the same (i.e. s = 1), the rotor impedance will also be the same. Thus, the rotor currents are equal, but opposite in phase that is the starting torque developed by each revolving field is the same, with one acting in forwarding direction and the other acting in the backward direction. Thus, the net torque developed by the motor is zero. 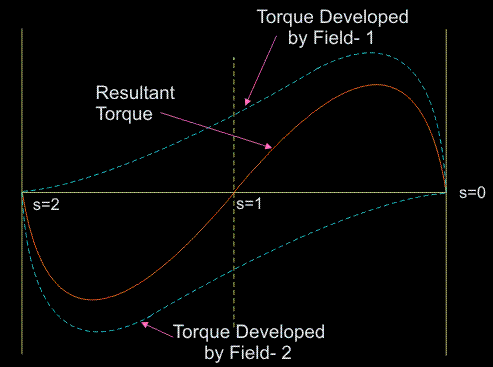 Ques 10. From the given Lissajous patterns obtained while measuring frequency using a cathode ray oscilloscope (CRO), select the pattern which indicates the relationship fv = 1⁄2fh

Lissajous figures are a family of parametric 2D curves frequently used to establish the frequency ratio or relative phase between two harmonic signals. They were initially investigated by Nathaniel Bowditch in 1815, and later in more detail by Jules Antoine Lissajous in 1857.

The shape of Lissajous figures depends on:

If sinusoidal voltages are applied to both vertical and horizontal inputs of CRO, some interesting figures are displayed, which are known as Lissajous figures.

Lissajous figures are formed when two sine waves are applied simultaneously to the vertical and horizontal deflecting plates of a CRO.

Two sine waves of the same frequency produce a Lissajous figure which may be a straight line, an ellipse or a circle, depending on the phase and amplitude of the two signals.

The various Lissajous figures for the different ratios are shown below 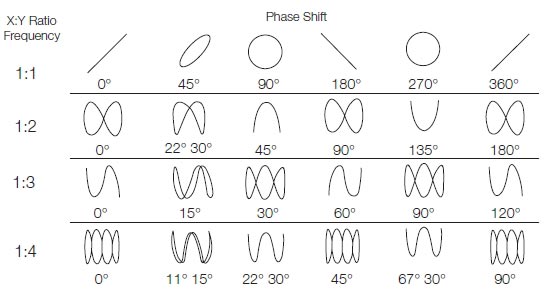