Ques 1. In a three-phase induction motor, the rotor field runs at the following speed  with respect to the stator structure:

When three-phase currents are supplied to the staler winding of a polyphase induction motor, a resultant field is set up which rotates at a constant speed called synchronous speed

When rotor itself is rotating at a speed N r.p.m. in the space.

Thus, rotor magnetic field also rotates, in space, at the same speed, and in the same direction as that of stator field. Hence, the two fields are magnetically locked with each other and are stationary with respect to each other.

Ques 2. V/f is maintained constant in the following case of speed control of induction motor:

An induction motor on a normal supply operates with a rotating field set up by three-phase currents in the stator winding. The magnitude of the field is controlled broadly by the voltage impressed upon the winding by the supply. This is because the resistance of the winding results in only a small voltage drop, even at full-load current, and therefore in the steady state the supply voltage must be balanced by the e.m.f. induced by the rotating field. This e.m.f. depends on the product of three factors:

Hence for the same design parameters [φ remaining the same] and ratio V/F, the torque of the motor, T, will remain constant. Since both V and f, are functions of the supply system, a variation in V and f can alter the performance and the speed-torque characteristics of a motor as required, at constant torque.

If in the steady state, the voltage applied to the stator terminals is increased without a corresponding increase in the frequency, only the flux can vary to regain the balance between applied voltage and e.m.f. If the flux is forced to increase by applying excessive voltages, the iron core of the machine is driven progressively into saturation. This not only increases iron losses due to hysteresis and eddy currents but can lead to a very marked increase in stator current, with corresponding resistive losses. Since most machines are designed to work with the minimum of material, their magnetic circuits are normally very close to saturation and excessive stator voltage is a condition which must be carefully avoided.

Any reduction in the supply frequency, without a change in the terminal voltage, causes u increase in the air-gap flux. Induction motors are designed to operate at the Knee point of the magnetization characteristic to make full use of the magnetic material. Therefore, the increase in flux will saturate the motor. This will increase the magnetizing current, distort the line current and voltage, increase the core loss and the stator copper low, and produce a high-pitch acoustic noise.

Base speed,” is defined as the  speed at which the motor will first produce its maximum designed power output, and “maximum speed,” the fastest the motor can spin while producing that same amount of power (available torque falls off as speed increases past “base speed.”)

Operation above base speed

First, operation above base speed is easily achieved by increasing the output frequency above the normal mains frequency since the rise in the applied voltage which is not permissible beyond the rated voltage, and which has already been attained by reaching the rated speed. The speed beyond the rated is therefore obtained by raising the supply frequency alone and maintaining the voltage at constant as it rated value.

Since V is constant above base speed, the flux will fall as the frequency is increased after the output voltage limit is reached. The machine flux falls in direct proportion to the actual V/f ratio. Although this greatly reduces the core losses, the ability of the machine to produce torque is impaired and the less mechanical load is needed to draw full-load current from the inverter. The drive is said to have a constant power characteristic above base speed. Many applications not requiring full torque at high speeds can make use of this extended speed range.

Operation below base speed

Below the base speed (V/F ratio is maintained constant, except at low frequencies where (V/f ) ratio is increased to keep maximum torque constant.

By maintaining a constant ratio of voltage to speed, we can maintain a constant air gap flux. Because torque is proportional to air gap flux, hence by constant V/f ratio, the torque can be made independent of speed in an AC motor.Hence we can achieve constant torque down to very low speeds.

One example is a paper winder. When it begins to wind, the empty core is light and does not require much torque to turn. Therefore, it can be turned above base speed at a reduced torque. As the roll is being wound and becomes heavier, the torque required to turn it becomes greater. Therefore, it is necessary for the drive to slow the speed and eventually run below the base speed so that torque is increased to handle the load. Eventually, the roll is heavy and requires the motor to provide maximum torque.

Ques 3. In a double-cage induction motor, which of the following is not true:

As we know that the induction motor requires high rotor resistance for good starting torque but low rotor resistance for good running performance. In a squirrel cage motor the rotor windings are permanently shorted and so it is not possible to increase the roto resistance at starting. However, the double cage motor overcomes this difficulty: it has the same type of stator as other cage motors but only the rotor construction is different. The rotor has two sets of slots-one set close to the rotor periphery and the other buried deep inside the rotor as shown in Figure 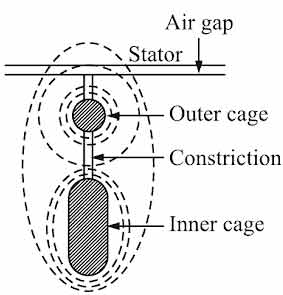 Voltage regulation of a transformer is defined as the change or difference in the secondary voltage from no load to full load at a given power factor with the same primary voltage for both conditions, i.e., rated load and no load. It is generally expressed as a percentage of the full load value.

Voltage regulation depends on the voltage drop and the impedance of the transformer, load current, and load power factor.

Ques 5. For which of the following pair of machines, the stator, and its winding can be of the same type:

Motors both single-phase and three-phase can be built with no dc excitation on the rotor and having non-uniform air-gap reluctance. The rotor does not have any windings.The stator of such motors will have windings similar to induction motor winding but the magnetic reluctance along the air-gap will be made variable. Such induction motors when built as three-phase motors are called synchronous induction motors.

A hysteresis motor is a single-phase synchronous motor without any projected poles and without d excitation. Hysteresis motors start by virtue of the hysteresis losses induced in the rotor by the rotating magnetic field produced by the stator windings. The rotor of hysteresis motor does not have any winding.

Hence like induction motor the reluctance motor and hysteresis motor can be built with either single phase or 3 phase.

Ques 6. In which of the following amplifier conﬁgurations, the power gain ls the largest?

Out of the three transistor connections, the common emitter circuit is the most efficient. It is used in about 90 to 95 percent of all transistor applications. The main reasons for this are :

In common emitter connection, Ic is the output current and IB is the input current. The collector current here is expressed as:

Ques 7. The transformer core is laminated in order to:

Hysteresis and eddy-current losses are collectively known as core loss.

Ques 8. For increasing the range of voltmeter, one should connect

Voltmeters are connected in parallel with a part of a circuit.  This is necessary because of objects in parallel experience the same potential difference. The ideal voltmeter should have infinitely large – resistance so that no current flows through it. Any current flowing through a voltmeter means an increase in the total circuit current which will increase in the total circuit current.

Ques 9. To conduct the Sumpners test on a transformer

The Sumpner’s test is another method of determining efficiency, regulation and heating under load conditions. The O.C. and S.C. tests give us the equivalent circuit parameters but cannot give heating information under various load conditions. The Sumpner’s test gives heating information also. It can be compared with the back to back test, used for D.C machines(Hopkinson’s test), power consumption would be equal to the no-load power consumption of machines/ equipment.

In O.C. test, there is no load on the transformer while in S.C. circuit test also only fractional load gets applied. In all in O.C. and S.C. tests, the loading conditions are absent. Hence the results are incomplete. In Sumpner’s test, actual loading conditions are simulated hence the results obtained are much more accurate. Thus Sumpner’s test is much improved method of predetermining regulation and efficiency than O.C. and S.C. tests.

The Sumpner’s test requires two identical transformers. Both the transformers are connected to the supply such that one transformer is loaded on the other.

We need two identical transformers because Often in large distribution substations, you are required to have two or more transformers running in parallel to accommodate the required peak load.

Ques 10. Unit of Reactive power is

Reactive power exists in an AC circuit when the current and voltage are not in phase.