A linear resistor is one that obeys Ohm’s law. A circuit that contains only linear components is called a linear circuit.

A cermet is a composite material composed of ceramic and metal materials.

A cermet is ideally designed to have the optimal properties of both a ceramic, such as high-temperature resistance and hardness, and those of a metal, such as the ability to undergo plastic deformation.

The cermet resistor can be obtained by depositing highly stable metallic solutions (like silver/gold with palladium or chromium with silicon monoxide or oxides of rhodium/zirconium) in an organic solvent on the ceramic substrate. This is done by micro screen printing, roller printing, or dipped proceed. When the substrate la heated (1000°C), the organic particles evaporate and the metal fuses into the ceramic substrate.

The metal glaze resistor is also a fixed resistor, similar to the metal film resistor. This resistor is made by combining metal with glass. The compound is then applied to a ceramic base as a thick film. The resistance is determined by the amount of metal used in the compound. Tolerance ratings of 2% and 1% are common.

For most materials, a very high sheet resistance can only be obtained by using an extremely thin film. By using a composite material such as a metal glaze, a thick and therefore more stable high ohmic film can be made. Such a film is produced by dipping the ceramic rod in a paste and drying and firing the layer.

As cylindrical resistors, cermet or metal glaze resistors are mostly used for high-resistance values and high voltages. The available resistance range is 100 kΩ to 100 MΩ. The stability is good and the current noise is acceptable for such high values.

Silicon Carbide is the only chemical compound of carbon and silicon. It was originally produced by a high-temperature electrochemical reaction of sand and carbon. Silicon carbide resistors are mechanically rugged and can stand high temperatures and overload current, thus silicon carbide resistors are widely applicable in various automatic devices.

These strokes are most dangerous as their effects are most severe and harmful. In this type of stroke, the discharge or the current path is directly from the cloud to the overhead line. From the line, the current path may be over the insulators down the pole to the ground. The voltage set up is in millions which can cause flashover and puncture of insulators. The insulators may get shattered till the surge is sufficiently dissipated and it travels to both sides. The wave may reach the substation and damage the equipment because of excessive stress produced. 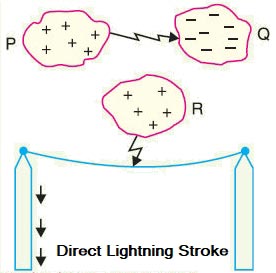 The effect of indirect strokes is similar to that of direct strokes. Their effect is more severe in the case of distribution lines than in the case of high voltage lines. These strokes are due to electrostatically induced charges on the conductors due to the presence of charged clouds. Sometimes currents may be induced electromagnetically due to lightning discharge in the immediate vicinity of the line which results in an indirect stroke.

A lightning arrester is a device used in electrical power systems and telecommunications systems to protect the insulation and conductors of the system from the damaging effects of indirect lightning stroke. The arrester provides a low-impedance path to the ground for the current from a lightning strike or transient voltage and then restores to normal operating conditions. 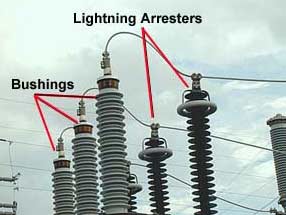 Lightning arresters are two-terminal devices in which one terminal is connected to the power line, and the other is connected to the ground. The path from line to ground is of high resistance that it is normally open. However, when lightning, which is a very high voltage, strikes a power line, it causes conduction from line to ground. Thus, voltage surges are conducted to the ground before a flashover between the lines occurs. After the lightning surge has been conducted to the ground, the valve assembly then causes the lightning arrester to become nonconductive once
more.

Ques 3. When an alternator is over-excited, which of the following is true regarding the reactive power that flows from it?

So the effect of the armature flux on the main flux affects its value and the distribution called armature reaction.

Consider a purely resistive load connected to the alternator, having a unity power factor. As induced e.m.f Eph drives a current Iph and loads power factor is unity, EphandIphare in phase with each other.

It can be seen from the phasor diagram that there exists a phase difference of 90°between the armature flux and the main flux. From the waveforms, it can be seen that the two fluxes oppose each other on the left half of each pole while assisting each other on the right half of each pole. Hence average flux in the air gap remains constant but its distribution gets distorted. Hence such distorting effect of armature reaction under unity p.f. the condition of the load is called the cross magnetizing effect of armature reaction. Due to such distortion of the flux, there is a small drop in the terminal.

The Synchronous speed of induction Motor is given as

The Slip of an Induction motor is given as

Ques 5. The function of a Pole shoe in a DC machine is

The field magnet has two parts 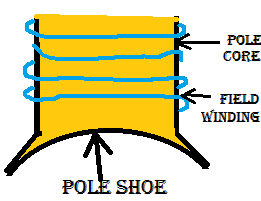 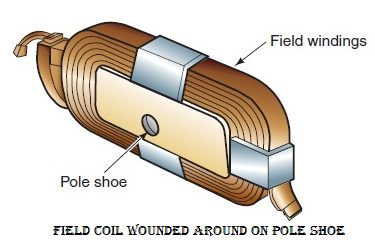 Each pole core consists of a pole shoe that has a curved surface. Pole shoes are made larger than their body because the permeability of the pole body is more than that of the air gap and hence better uniform flux distribution can be obtained in the machine which reduces the flux leakage and gives better output.

Hence the pole shoes spread out the flux in the air gap and reduce the reluctance of the magnetic path due to its large cross-section. The pole shoes support the exciting coils. The pole shoes are made curved to ensure a uniform air gap around the armature core. The following are the functions of pole shoes:

Ques 6. In the case of the purely inductive circuit, the current is maximum when

Consider a purely inductive circuit as shown in the figure. 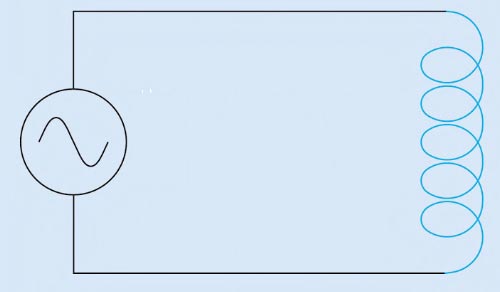 The greatest rate of current change occurs when the current passes from negative, through zero and begins to increase in the positive direction. Because the current is changing at the greatest rate, the induced voltage is maximum. As current approaches its peak value in the positive direction, the rate of change decreases, causing a decrease in the induced voltage.

Or Mathematically we can prove the same

Consider the sinusoidal current and voltage waveform.As we know that the voltage leads the current the by 90°. i.e

The value of current will be maximum when ωt = 90°

Hence when the current will reach its maximum value the voltage will become zero.

Ques 7. The material used for making shunts for measuring instruments is

Manganin is the trademarked name for an alloy that consists of three metallic elements – Copper, Nickel, and Manganese. The feature of manganin is that its resistivity remains constant over a wide range of temperatures.  Manganin is virtual of zero temperature coefficient of resistance and so it is highly stable. Manganin is much more resistive than copper so used as a standard resistance in many measuring instruments.

Manganin has been used for different industrial purposes from the moment of its discovery. The properties of this material make it most efficient for certain applications. It is widely used in industries for manufacturing various substances like:

The wire and foil of this material are mainly used to manufacture various resistors – mainly ammeter shunts. This metal alloy has a very low-temperature coefficient of resistance. It also has long-term stability. These properties make it very useful to be used for making shunts.

Ques 8. The speed of rotating the magnetic field of a 3-φ 50 Hz induction motor running at 960 RPM will be

We know that an induction motor runs at a speed slightly less than the synchronous speed. Here, Nr = 960 rpm (given). Synchronous speed corresponding to this rotor speed must, therefore, be 1000 rpm.

Ques 9. Transformers work on the principle of

A transformer is a static device that converts the alternating current energy from one voltage level to another voltage level.

A transformer operates on the principle of Faraday Law of electromagnetic induction i.e mutual inductance, between two coils.

According to these Faraday’s laws,
“Rate of change of flux linkage with respect to time is directly proportional to the induced EMF in a conductor or coil”.

Mutual induction is the process by which a coil magnetically induces a voltage into another coil located in close proximity to it. Transformers get their name from the fact that they “transform” one voltage level to another voltage level.

A single-phase transformer basically consists of two electrical coils of wire, one called the “Primary Winding” and another called the “Secondary Winding”.

Similar to other rotating electrical machines, a three-phase induction motor also consists of two main parts: the stator and the rotor (the stator is the stationary part and the rotor is the rotating part). Apart from these two main parts, a three-phase induction motor also requires bearings, bearing covers, endplates. etc. for its assembly.

The stator of a three-phase induction motor has three main parts namely, the stator frame, stator core, and stator windings. The stator frame can either be casted or can be fabricated from rolled steel plates. The stator core is built up of high silicon sheet steel laminations of thickness 0.4 to 0.5 mm. Each lamination is separated from the other by means of either varnish, paper, or oxide coating.

As Stator is the stationary part of the motor. Hysteresis and eddy current losses occur in the stator, because of changing flux associated with it.