Ques 1. Three resistances of 30 ohms, 15 ohms and 5 ohms are connected In parallel, their combined resistance will be:

Now in the above question, the value of minimum resistance is 5 ohm then the equivalent resistance in parallel will be always less than 5 ohms.

Ques 2. Number of diodes required in the ordinary full-wave rectifier is

Rectifier in a device that converts alternating current into direct current. Rectifier circuits use semiconductor diodes as rectifying elements. Following are the different types of rectifier circuits:

The full-wave rectifier can be built in the following ways:

A step-down transformer is used to reduce the ac supply voltage to the required level. Center tapping in the secondary of the transformer is done to obtain two equal voltages but of opposite phases. 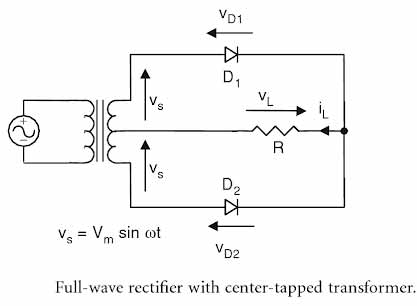 Ques 3.  Two capacitors of values 12μF and 4μF ate connected in series, the capacitance or the combination is:

Ques 4. In balanced 3φ supply system current In the neutral is equal to:

As the three individual sinusoidal voltages have a fixed relationship between each other of 120o they are said to be “balanced” therefore, is a set of balanced three-phase voltages their phasor sum will always be zero as Va + Vb + Vc = 0

Ques 5. Tesla is the unit of

The Tesla (symbolized T) is the standard unit of magnetic flux density. It is equivalent to one weber per meter squared (1 Wb. m -2 ).

B is magnetic flux density in teslas (T),

Φ is magnetic flux in webers (Wb), and

Flux describes the quantity which passes through a surface or substance.

The unit of electrical flux is Volt Meter and the unit of magnetic flux is Weber.

Magnetomotive force, also known as magnetic potential, is the property of certain substances or phenomena that give rise to the magnetic field. The standard unit of magnetomotive force is the ampere-turns (AT).

Ques 6. If two supply terminals of a 3φ induction motor are interchanged, then the:

The phase sequence of the three-phase voltage applied to the stator winding is A-B-C. If this sequence is changed to A-C-B, it is observed that the direction of rotation of the field is reversed i.e., the field rotates counterclockwise rather than clockwise.

This causes the currents in the phases to interchange their relative timing in going positive and negative with the result that the magnetic field produces the reversal in direction of rotation.

Ques 7. A transformer has 500 turns on its primary and 50 turns on secondary winding its transformation ratio will be:

Ques 8. The time constant in an R.C. circuit is equal to

A 3-phase induction motor draws a large magnetizing current because of the high reluctance of the magnetic circuit; air-gap being the main reason. When the load on the motor is increased, the in-phase current supplied to the motor increases, but the magnetizing component of the current remains the same. However, because of the large value of magnetizing current, which is present regardless of load, the p.f. of a 3-phase induction motor even at full load seldom exceeds 0.85.

Electric motors are devices that convert electric energy into magnetic energy and finally into mechanical energy. Electromagnetism is the basis of an electric motor operation by generating magnetic forces necessary to produce either rotational or linear motion. For rotating electric motors, it is the interaction between the stator and rotor magnetic fields that create motor torque to drive external loads.

In the motor, the current is passed through a loop that is immersed in a magnetic field. In addition, when electric current flows through a coil, it generates a magnetic field. When two magnets get close together the North and the South poles attract, whereas the same poles will repel each other. Thus, the magnetic field and coil currents produce force, and consequently a torque to rotate the rotor is generated.