Ques 33. The resistance which is the property of opposing the current to flow depends upon its:

Ques 34. Which method can be used for absolute measurement of resistances?

Absolute instrument: Absolute instrument are those instrument which indicates the quantity to be measured in terms of the constant of the instrument (dimensions, turns etc) and in order to find out the quantity in the practical units it is necessary to multiply such deflections with an instrument constant. No previous calibration or comparison is necessary in this case. The most common absolute instrument is tangent galvanometer which gives the measured current in terms of the tangent of the deflected angle, the radius and the number of turns of the galvanometer.  Rayleigh’s current balance and Lorentz method of resistance measurement are examples of this class of instruments. Such instruments are rarely used (the use being merely confined within laboratories as standardizing instruments).

Example of the secondary instrument is

Ques 35. Galvanizing is the coating of

Galvanization or galvanizing is the process of applying a protective zinc coating to steel or iron, to prevent rusting.

Ques 36. The eddy current losses in the transformer occur in:

In transformer we provide alternating current in the primary which produces alternating flux in the core , this flux links with secondary of the transformer and induces emf in secondary, it may be possible that flux also links with some other conducting parts of transformer such as ferromagnetic core or iron body and induces local emf in these parts of the transformer which will cause a circulating current to flow in these parts causing heat loss. these currents are called eddy current and this loss is called eddy current loss.

Eddy current losses in the transformer is given by

Where Ke = Eddy current constant
t = thickness of the core

Ques 38. Which of the following is heaviest?

An atom is the smallest constituent unit of ordinary matter. Every atom is composed of a nucleus and one or more electrons bound to the nucleus. The nucleus is made of one or more protons and typically a similar number of neutrons.

Electron(-vely charged), proton(+vely charged) and neutron (electrically neutral). Mass of electron is the lowest whereas the mass of proton and neutron is almost the same.

So, the neutron is the heaviest among the rest of the particles.

A molecule is an electrically neutral group of two or more atoms held together by chemical bonds.The molecular weight of a molecule is the sum of the atomic weights of its component atoms. Hence the molecule weight is highest among all the given options.

Ques 39. Star/delta starter is used in a:

Typically, three-phase motors will be started by instantly connecting the supply from the mains. In this case, the starting current is excessive and because of this, the starting torque of the motor is excessive. This torque will speed up the motor to attain its ultimate speed.

This kind of starting is applicable for small motor i.e. motors which can be rated as much as 5HP. However, the same starting approach can’t be utilized for increased capability motors. The reason being defined under.

In large motors, the starting current could be very excessive and if it is connected on to the mains supply, there might be an enormous voltage drop within the line. This voltage drop effects in the behavior of different systems and other loads linked to the supply.

The starting current of large three-phase induction motors will be as excessive as 6 times that of the maximum current (full load current).

There are many types of Reduced Voltage Starters. Some of them are listed below.

The starting current in an induction motor is proportional to the input voltage per phase to the motor. If VLL is the line to line voltage applied to the motor,

The voltage drop in the stator impedance is small compared to the applied voltage and can be neglected.

The most popular and effective means of reduced voltage starting is achieved by means of star-delta starters. In this method, the motor windings are connected in star configuration during starting and then switched over to Delta once the machine has picked up sufficient speed (about 75% of the speed). By connecting the motor in the star configuration, the reduction in voltage corresponds to 1/√3 = 0.577. The reduction in starting current when compared to DOL starting is 33.3%. But the starting torque also gets reduced and this is a disadvantage. If this method is to be used, we must make sure that the load torque is not more than the 50% of the rated torque.

The TRIAC is a three terminal semiconductor device for controlling current. It gains its name from the term TRIode for Alternating Current.

A triac is a device that operates like an SCR for an AC circuit. The triac conducts during both halves of the AC waveform. This means that the output of a triac is AC, not DC as is the case with an SCR. The schematic symbol of a triac is shown in Figure. 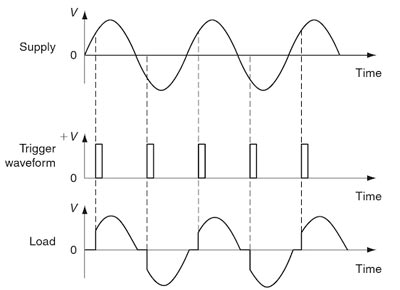 Normally, the power factor of the whole load on a large generating station is in the region of 0.8 to 0.9. However, sometimes it is lower and in such cases In order to improve the power factor, some devices taking leading power should be connected in parallel with the load. This can be achieved by the following equipment

Volt is the electrical unit of voltage or potential difference (symbol: V).

One Volt is defined as energy consumption of one joule per electric charge of one coulomb.

One volt is equal to the current of 1 amp times the resistance of 1 ohm:

Ques 43. Inside a hollow spherical conductor:

Why is the electric field inside a conductor zero? 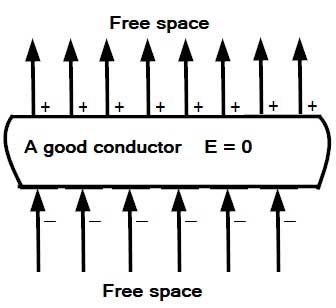 Remember: The charges move in a conductor so as to kill the external field

Consequently, no further movement of charges will take place. That is, the static condition will be reached after a brief transient period during which charges move to the surfaces. External field lines terminate on the bottom surface and emerge from the top surface, as shown in the figure.