All dc machines are equipped with commutators. However, the commutator is also used in some ac machines, i.e. ac motors in the fractional horsepower range as well as larger rated ac motors. For diverse requirements of industrial drives, the plain induction motor is not suitable being essentially a constant-speed motor with low power factor. Therefore in the case of industrial drives requiring variable speed and good power factor, the use of ac commutator motors assumes considerable importance. Finally, larger rated ac commutator motors have also been developed based on the principle of operation of Schrage motor.

AC commutator motors, like comparable DC motors, have higher starting torque and higher speed than AC induction motors. The series motor operates well above the synchronous speed of a conventional AC motor. AC commutator motors may be either single-phase or poly-phase.

During the negative half cycle, both the flux and the armature current reverse but its product is positive. So, torque remains positive. The torque developed is not of constant magnitude, but pulsates between zero and maximum value each half-cycles.

Ques.132. Which of the following parts in a DC motor can bear maximum temperature conditions?

Ques.133. Which of the following phenomenon shows the regulation of an alternator?

Voltage regulation of an alternator is defined as the increase in terminal voltage when the full load is thrown off (removed) keeping excitation and speed constant.

Eo = Terminal voltage at no load

Ques.134. Which one is increased when the negative feedback voltage is applied to an amplifier?

Feedback is commonly used in amplifier circuits. A signal that is proportional to the output is compared with input or a reference signal so that the desired output is obtained from the amplifier. The difference between the input and the feedback signals, called the error signal, is amplified by the amplifier. There are two types of feedback:

Negative feedback in an amplifier has four major benefits:

(i) It stabilizes the overall gain of the amplifier with respect to parameter variations due to temperature, supply voltage, and so on

(ii) Noise Reduction: Negative feedback when used in amplifiers increases the signal to the noise ratio or causes the reduction in noise.

(iii) Increase in Input Impedance: Negative feedback increases the input impedance of the amplifier which is generally preferred in multistage amplifiers to reduce the loading effect.

Where A is the open-loop gain i.e gain without feedback

β is the feedback factor

(iv) Non-linear Distortion: Reduction Application of negative feedback to amplifiers causes the amplifier characteristics to be least non-linear or more linearized and the distortion gets reduced by a factor of 1/(1 + Aβ).

it increases the bandwidth.

Ques.135. The transition temperature of the mercury is

Few important properties of superconductors are explained in brief in this section.

Similarly, good superconducting materials like Zn and Pb are not good electrical conductors. The temperature at which mercury becomes superconducting was found to be close to the boiling point of liquid helium (4 2 K).

Ques.136. The region along load line including all points between saturation and the cut-off is known as:-

The output characteristics can be divided into four distinct regions. namely, the active region, the saturation region, the Linear region, and the cut-off region. 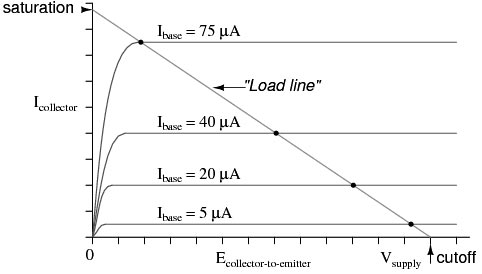 In order to cut off the transistor, it is not enough to reduce lB to zero. Instead, it is necessary to reverse bias the emitter junction slightly. The cut-off is thus defined as the condition where the collector current is equal to the reverse saturation current ICO and the emitter current is zero.

Linear Region:- The region along the load line including all points between saturation and cutoff is generally known as the linear region of the transistor’s operation. As long as the transistor is operated in this region, the output voltage is ideally a linear reproduction

Kinetic Energy is the energy possessed by an object because of its motion.

Ques.138. Harmonics in any transformer are generated due to which of the following factor?

Harmonics cause distortions of voltage and current waveforms, which have adverse effects on electrical equipment. Harmonics are one of the major power quality concerns. 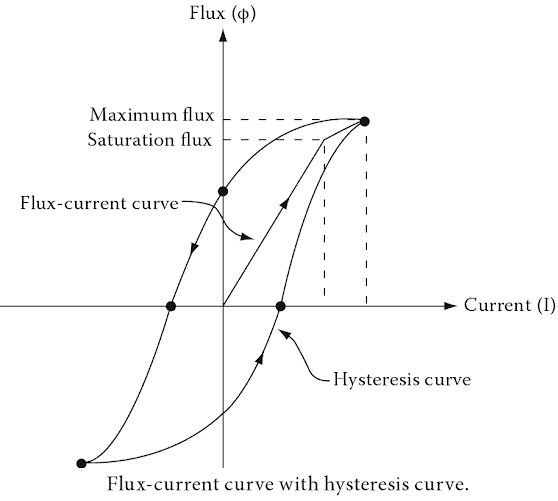 As shown on the hysteresis curve in, the magnitude of the current that causes the iron to go into saturation is not the same as the magnitude at which the iron comes out of saturation. The boundary between linear operation and saturated operation is not fixed but, instead, depends on the previous values of that current. The hysteresis phenomenon is a fundamental property of ferromagnetic materials. Hysteresis occurs because of residual flux density stored in the iron that must be overcome when the current changes direction. It should be noted that, for a particular value of flux, there are two values of current for which the core would be in saturation.

The presence of harmonics causes overheating, power loss, reduced efficiency and shortened lifespan of the devices.

Ques.140. The flux of the magnetic circuit is analogous to which of the following terms in an electric circuit?

With a similar analogy, different electrical terms can be replaced by similar magnetic terms Ohm’s law for electrical circuits is,

with the above analogy, Ohm’s law for the magnetic circuit will be,