There are two main types of the welding process. They are

In fusion welding, the metal at the joint is heated to the molten state. Then it is allowed to solidify. Pressure is not applied in this welding process. So it is known as non-pressure welds. Gas welding and electric arc welding are examples of fusion welding.

Ques.62. Household energy meter falls under the category of which type of instrument?

Integrating instruments are those which measure the total amount of the electrical quantity (e.g. energy) supplied over a period of time.

Ques.63. Among these which one is correct about the characteristics of the transistor?

The input and output impedance of transistors depends on quite a lot on the technology of the transistor and on the way it is used in a circuit.

A bipolar transistor used as a common collector amplifier will have a high input impedance and a low output impedance.

The same transistor used as a common base amplifier will have a low input impedance and a high output impedance.

Advantages of bipolar junction transistor (BJT) are as given below,

There are some disadvantages of bipolar junction transistor (BJT) are as given below,

Ques.64. The dielectric constant of air is___

For all practical purposes, the dielectric constant of air is 1.0, the same as the vacuum. More accurately, it is around 1.00059.

Ques.65. Magnetic bubbles are used as___

Bubble memories can not replace the main memory (CMOS) because they are too slow. However, they can contain a great deal of information in a small space and may be used to replace the magnetic disc eventually, as they have the advantage of no moving parts.

Bubble memory is highly reliable, it is not susceptible to environmental fluctuations and it can operate on battery power for a considerable period of time. These qualities make bubble memory well suited for use with industrial robots and in portable computers.

Ques.66. If the instrument have a wide range, then instrument should have_______

Various Scales for measurement through an instrument are

1. Linear Scales:- A linear scale like a foot rule, is the simplest to read. Though termed as linear it may form a part of the arc, however, the graduations will be uniformly disturbed. The moving coil electrodynamic wattmeters generally have the linear scale. Moving iron instruments also have nearly linear scales.

If the current to be measured extends over a wide dynamic range, for example spanning several orders of magnitude, there is a risk that the signal conditioning circuit can saturate at its upper or lower limit and no measurement will be obtained. This problem can arise in the measurement of photocurrents in the atmosphere which span a large range of values during the daytime, and in atmospheric electricity measurements where currents generated in elevated points vary between HA in disturbed weather to pA in fair weather. An alternative approach for current measurement is therefore needed if, in preserving the capability to measure large currents, good resolution is still required at the low current end of the range.

A wide operating range can be achieved with a logarithmic current amplifier, which generates an output voltage proportional to the logarithm of the input current. This can be implemented with an opamp by using a device having an exponential voltage-current response in place of the feedback resistor of the trans-resistance configuration, such as a diode.

Similarly, we use logarithmic scales for things that come in an extremely wide variety of sizes. Earthquakes are just one example: a 9.0 earthquake releases a trillion times as much energy as a 1.0 earthquake.

Ques.67.  How many types of dependent source are there?

Classifying the types of dependent sources

There are four types of dependent sources exist

Voltage controlled current source (VCCS): Now account for a dependent current source at the output terminals. With a voltage across the input, you can control the amount of current output.

Current-controlled current source (CCCS):  With a current flowing through the input port, you can control a dependent current source at the output port.

Ques.68. How much eddy current loss does an air-core inductor have?

An inductor or a coil may be defined as an electrical component that is manufactured with a specific amount of inductance which is the property of a coil that opposes changes in current by means of energy storage in the form of the magnetic field. When a current flows through a coiled wire, an electromotive force is generated in such a way that it opposes the flow of current.

The inductors are used in tunning, filter circuits, transformers, and coupled circuits to transfer or couple energy from one ckt to another. The inductor is also known as the choke.

Based on the type of core used, inductors can be classified as

Air core inductor: The air core inductor is made of thin copper wire-wound over a former made of thick cardboard. It has a low value of inductance. Air cores are the best for high-frequency applications, but they become excessively large as inductance and current increases. Essentially, air has an excellent frequency response but a poor ability to store magnetic energy. These are suitable for radiofrequency applications.

Ferrite-core inductors: Ferrite core inductors are made of coils wire wound on a ferrite core. The ferrite-core has a very low edyy current loss. Ferrite has a reasonably high-frequency response (not as high as air) but it also has a significantly better ability to store energy. The typical applications of ferrite core inductors are in (i) r.f. chokes for supply decoupling purposes, (ii) switching regulated type d.c. power supplies, and (iii) various types of filters used in communication equipment.

Ques.69. How can we find the application of differentially compound D.C motors?

In the differential compound, motor two field windings i.e shunt and series windings oppose each other. 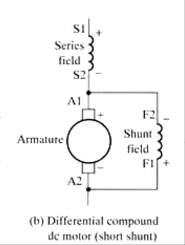 For the equation of DC motor

So of if the current increase the back Emf decrease

Now, torque is given by T=kØIa

Hence if we increase the flux the armature current will decrease

If we assume that load torque remains constant then according to the torque equation if field flux increases then lesser current will flow through the motor armature to produce the same torque which will increase the back emf in the armature due to the reduced resistive voltage drop across the armature due to reduced armature current.

Now back emf is directly proportional to the product of field flux and rotor speed. Since from the given conditions both the back emf and field, flux has increased hence the motor speed will remain fairly constant. However, since an increase in load tends to decrease the field strength, the speed characteristic becomes unstable. Rarely is this type of motor used in aircraft systems.

Ques.70. A property of a transformer that makes it ideal is:-

Characteristics of an Ideal Transformer