Ques.91. To minimize loss due to hysteresis, the magnetic material should have?

When a magnetic material is subjected to one cycle of magnetization, B always lags behind H so that the resultant B-H curve forms a closed loop, called hysteresis loop.

Hysteresis loss is present in all those electrical machines whose iron parts are subjected to cycles of magnetization. The obvious effect of hysteresis loss is the rise in temperature of the machine. It can be shown that hysteresis energy loss per cycle is directly proportional to the area of the hysteresis loop.

where Kh is the Hysteresis coefficient depends upon the material. The smaller the value of Kh of a magnetic material, the lesser is the hysteresis loss.

The armatures of electrical machines and transformer cores are made of magnetic materials having low hysteresis coefficient in order to reduce the hysteresis loss. The best transformer steels have Kh values around 130, for cast steel they are around 2500 and for cast iron about 3750.

Ques.92. A conductor of length L has current I passing through it, when it is placed parallel to a magnetic field. The force experienced by the conductor will be? 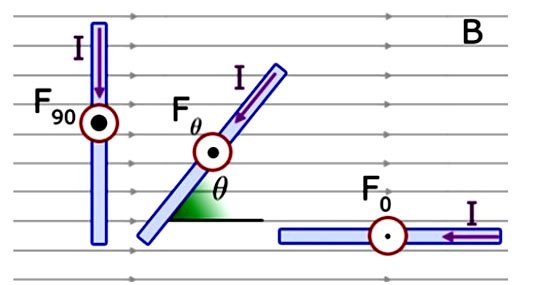 Expression for the force.

Thus if a current-carrying conductor is placed parallel to the direction of the magnetic field, the conductor will experience no force.

Hence, a current-carrying conductor will experience a maximum force when it is placed at right angles to the direction of the magnetic field.

Ques.93. Another name of unity gain amplifier is?

This circuit has high input impedance and zero output impedance with unity gain. Due to this reason, a voltage follower circuit is used as a buffer for impedance matching. It is also called source follower, unity gain amplifier, buffer amplifier or isolation amplifier.

Ques.94. If the field current of a three-phase alternator is reversed, what happens to its phase sequence?

The direction of rotation of the synchronous motor is determined by its starting direction, as initiated by induction motor action.

Thus, to reverse the direction of a 3 phase synchronous motor, it is necessary to first stop the motor and then reverse the phase sequence of the 3 phase connections at the stator. Reversing the field current of the alternator will not affect the direction of the synchronous motor as field current is independent of the phase sequence.

Ques.95. FInd the current flowing through the resistance R3?