Ques 61. In a uniform electric field, field lines and equipotentials

The equipotential surfaces associated with a uniform electric field consist of a family of planes perpendicular to the field lines. 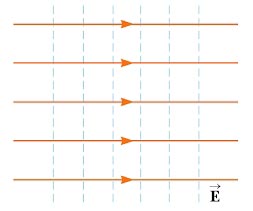 In the case of the uniform electric field, the field lines are straight and equally spaced. Therefore, equipotential surfaces will be parallel planes at right angles to field lines.

Ques 62. During forward blocking state, the SCR has

The SCR has Two state

The SCR is said to be forward-biased when the anode is made positive with respect to the cathode. Due to this forward bias, the junctions J1 and J3 are forward biased and J2 is reverse biased. Hence the forward voltage is to be held by junction J2.

A very small current flows from anode to cathode. This current is called forward leakage current. This current is of the order of few milliamperes. In the forward blocking mode, the voltage can be increased by VBO. When the forward voltage reaches VBO, the SCR turns on.  During forward Blocking Mode SCR acts as a Resistor.

Ques 63. Turn-on time for an SCR can be reduced by using a

Ques 64. The disruptive critical voltage will

The critical disruptive voltage is defined as the minimum phase to the neutral voltage at which corona occurs.

The disruptive critical voltage depends on the following factors:

Dust and dirt. Due to the presence of dust and dirt, less voltage gradient is required for sustained discharge. The critical disruptive voltage is reduced due to dust and dirt and therefore the corona loss is more.

Ques 65. What type of insulator will be used in the direction of the transmission line is to be changed? 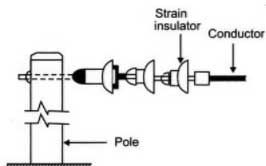 Ques 66. Which statement about SF6 gas is correct?

Pure SF6 gas is colorless, odorless, tasteless, and non-toxic, it is chemically stable and non-flammable.

SF6 gas, when used in electrical equipment, gets decomposed when electrical discharges occur. During the Arc extinction process, SF6 is decomposed into atoms, electrons, and ions.

These atomic components do not recombine completely to form the original SF6 gas on cooling. They form low molecular gaseous sulfur fluorides and compounds with the contact metals principally SF4 and SF2, together with a small amount of  S2, F2, S, and F. Some of the decomposition products are toxic and harmful to personnel working with the equipment.

Ques 67. One coulomb of electrical charge is contributed by how many electrons?

The symbol Q often denotes charge and the SI unit of electric charge is the coulomb (C).

Ques 68. A dynamic system with input x(t) and output y(t) is represented by the following:

If the impulse response of the discrete-time LTI system is not identically zero then the system is called a Dynamic system or system with memory.

Ques 69. Three equal resistors each equal to R ohm are connected as shown in fig. The equivalent resistance between points A and B is:

Ques 70. The time constant of the circuit shown in fig. is: 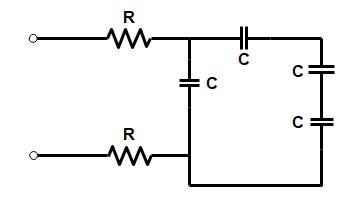 Since 3 capacitors are in series, therefore, its equivalent resistance

Now C/3 is in parallel with a capacitor C hence

Now the equivalent circuit is shown as below

Since both the resistance are in series

The time constant of the RC circuit is

Ques 71. If the current in the armature of the d.c series motor is reduced to 5%, the torque of the motor will become:

In DC series Motor, the torque is directly proportional to the square of the armature current

Ques 72. If the excitation of an alternator operating in parallel with other alternators decreases, its:

From both of the above conditions i.e whether the excitation is increased or decreased its power factor change.

Ques 73. The output signal of a common-collector amplifier is always:

This is because the output signal across the emitter is almost the replica of the input signal with little loss. In other words, the output voltage follows the input voltage and hence the voltage gain will be a maximum of one.

Ques 74. A current is said to be alternating when it changes in:

An alternating current (AC) is an electric current of which magnitude and direction vary, unlike direct current, whose direction remains constant.

Ques 75.  Hysteresis loss in a transformer depends upon:

Hysteresis losses are also known as Iron Loss or Core Loss and it is always constant.

Hysteresis loss is due to the reversal of magnetization of the transformer core whenever it is subjected to the alternating nature of magnetizing force.

Hysteresis Loss is given by

Hence the Hysteresis losses are directly proportional to the supply frequency.