Ques.81. If in a synchronous motor, driving mechanical load and drawing current at lagging power from the constant voltage supply, its field excitation is increased, then its power factor

A synchronous motor is a machine which converts a electric power into mechanical power at a constant speed called synchronous speed. It is a doubly excited machine because its rotor winding is excited by direct current and its stator winding is connected to an A.C supply.

Stator: Stator is the stationary part of the machine. The three-phase armature winding is placed in the slots of the stator core and is wound for the same number of poles as the rotor.  The stator is excited by a three phase ac supply as shown in the Figure 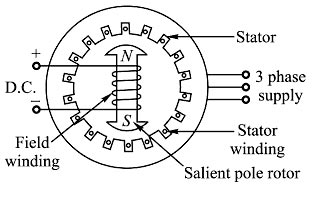 It should be noted that the changes in the dc field excitation do not affect the motor speed. However, such changes do alter the power factor of a synchronous motor. If all of the resistance of the rheostat is inserted in the field circuit, the field current drops below its normal value. A poor lagging power factor results. If the dc field is weak, the three-phase ac circuit to the stator supplies a magnetizing current to strengthen the field or the lagging reactive power will be drawn from A.C source to aid magnetization. This magnetizing component lags the voltage by 90 electrical degrees. The magnetizing current becomes a large part of the total current input. This gives rise to a low lagging power factor.

If a weak dc field is strengthened, the three-phase ac circuit to the stator supplies less magnetizing current and the leading current is drawn from the ac source to compensate (oppose) the magnetization. Because this current component becomes a smaller part of the total current input to the stator winding, the power factor increases. The field strength can be increased until the power factor is unity or 100%. When the power factor reaches unity, the three-phase ac circuit supplies energy current only. The dc field circuit supplies all of the current required to magnetize the motor. The amount of dc field excitation required to obtain a unity power factor is called normal field excitation.

The magnetic field of the rotor can be strengthened still more by increasing the dc field current above the normal excitation value. The power factor in this case decreases. The circuit feeding the stator winding delivers a demagnetizing component of current. This current opposes the rotor field and weakens it until it returns to the normal magnetic strength.

Ques.82. Electric charge measured in coulombs has the charge of how many electrons?

Electric charge is the physical property of matter that causes it to experience a force when placed in an electromagnetic field.

One coulomb is the fundamental SI unit of charge. It is defined as the charge in one Ampere of current passed for one second.

So for making a charge of 1 Coulomb, the number of electrons required will be:

Ques.83. A protective device, which reduces the steepness of wavefront of a surge by absorbing surge energy is called

The capacitor is used as a surge absorber. XC = 1/2πfC, for high frequency, it offers low reactance. A surge is a high-frequency wave, the capacitor acts as a short circuit device, passing it to earth.

In another type of surge absorber, the parallel combination of resistor and inductor is used as a surge absorber. This combination is placed in series with the line steep wave fronts. Since XL = 2πfL, the inductor offers high resistance at high frequencies. The surge then flows through the resistor, where it is dissipated.

Ques.84. In an amplifier with the negative feedback, bandwidth is _______ and voltage gain is

Feedback is commonly used in amplifier circuits. A signal that is proportional to the output is compared with an input or a reference signal so that the desired output is obtained from the amplifier. The difference between the input and the feedback signals, called the error signal, is amplified by the amplifier. There are two types of feedback:

Where A is the open loop gain i.e gain without feedback

β is the feedback factor

Amount of feedback (1 + Aβ) is also called the desensitivity factor.

Negative feedback in an amplifier has four major benefits:

There are two disadvantages of negative feedback:

Ques.85. Choose the type of electrochemical cells from the following options.

Electrochemical cells are either ‘galvanic’ or electrolytic’.

An ‘electrolytic cell’, on the other hand, uses electricity to decompose its electrolyte, a process called ‘electrolysis’, usually for the purpose of electroplating – such as silver or chromium plating

Ques.86. The flow of charged particle in one unchanging direction is called:-

When the direction of a current remains unchanged in a conductor, it is called Direct Current or D.C. In an electric cell, the positive and negative electrodes are fixed. And, the current flowing from a cell is D.C.

An Alternating Current or A.C. is that electric current which changes direction every half of the time period.

Ques.87. ______ Is defined as the no. cycle completed by an alternating quantity in one second.

Frequency:- The number of cycles completed by the AC quantity in one second is called frequency. It is expressed in hertz (Hz) or cycles per second.

Instantaneous Value:- Instantaneous values are the values of the alternating quantities at any instant of time. They are represented by lowercase letters, i, v, e, etc.

Amplitude:- The maximum magnitude of the quantity (voltage or current) is known as amplitude

Ques.88.The transmission ratio of the transformer is

A transformer is a static device which converts the alternating current energy from one voltage level to another voltage level. 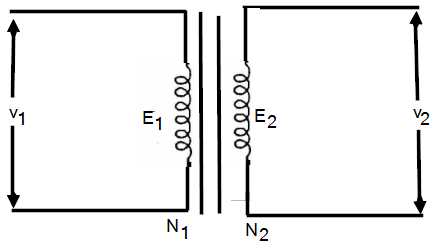 The constant K is called as Voltage transformation ratio and it is given as:

For an ideal transformer, there is no voltage drop in the windings, therefore, E1 = E2and V1 = V2.

There are no losses in an ideal transformer therefore volt-ampere input of the primary will be always equal to the volt ampere of the secondary.

From above equation, it is clear that current is inversely proportional to the voltage i.e if we will increase the value of voltage than the value of current will decrease.

Ques.89. Irrespective of the causes, which is the fault in a 3-phase system?

Single-phase to earth fault is the most common fault and examples are:

The over-voltages on a power system may be broadly divided into two main categories:

Internal causes of over-voltages on the power system are primarily due to oscillations set up by the sudden changes in the circuit conditions. This circuit change may be abnormal switching operation such as an opening of a circuit breaker, or it may be the fault condition such as the grounding of a line conductor.

Circuit-breaker operations that can cause switching surges include

1. Switching operation of an unload long transmission line and an unloaded transformer at a distant terminal

2. Switching operation of an un-load or reactor load transformer

3. Switching operation of a shunt reactor

Insulation failure – The most common case of insulation failure in a power system is the grounding of the conductor (i.e. insulation failure between line and earth) which may cause over-voltages. In case of a breakdown a insulation to earth, the potential at fault suddenly falls from maximum to zero and consequently a negative voltage wave of a very steep front in the form of surge travels from the fault in both the direction.

Arcing ground – The phenomenon of intermittent arc taking place in line-to-ground fault of a 3 phase system with consequent production transients is known as arcing ground. The transients produced due to arcing ground are cumulative and may cause serious damage to the equipment in the power system by causing breakdown of insulation, Arcing-ground be prevented by earthing the neutral.